Mohamed Abdullahi Mohamed, better known as “Farmajo,” was declared the winner after two rounds of voting by the Somali parliament in Mogadishu.

Mohamud conceded defeat after the vote count, and the crowd inside a venue at Mogadishu’s international airport erupted into cheers. Witnesses tell VOA’s Somali service that celebrations — and celebratory gunfire — have broken out in the streets of the Somali capital.

The new president was quickly sworn in and pledged to improve security, fight corruption and assist the poor.

Farmajo, 54, has spent much of his adult life in the city of Buffalo, New York, where he raised a family and held various jobs in the the New York state government.

But he maintained contact with Somali politics and served eight months as Somali prime minister during 2010 and 2011, at the height of the insurgency by Islamist militant group al-Shabab.

Al-Shabab threatened to disrupt the voting Wednesday but the election went off peacefully. African Union peacekeepers and government forces imposed tight security, sealing off all roads to the airport. All flights to and from the airport were canceled. 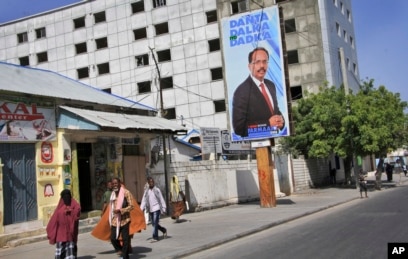 Somalis walk past a campaign poster for candidate Mohamed Abdullahi Farmaajo on the eve of presidential elections in Mogadishu, Somalia, Feb. 7, 2017. Graft – vote-buying, fraud, intimidation – is the top concern in a nation that Transparency International now rates as the most corrupt in the world.

Ahead of the vote, candidates allegedly paid lawmakers millions of dollars in cash and gifts in an effort to win support. Election organizers had lawmakers drop their ballots in a transparent box, then counted the votes in front of the crowd to head off any charges of trickery.

Farmajo faces the task of eliminating al-Shabab and stabilizing a country that has seen almost continuous conflict since the early 1990s. Al-Shabab has repeatedly sent suicide bombers into Mogadishu hotels where lawmakers, diplomats and businessmen gather, in an effort to destabilize the fragile government.

In addition, aid agencies have warned of a possible famine affecting hundreds of thousands of Somalis due to violence and renewed drought.