Since April, Boko Haram has carried out more than 100 attacks in Nigeria’s northeastern city of Maiduguri. Efforts are underway to secure the city, including the relocation of military chiefs to Maiduguri, and to tighten security at the university after staff abductions and repeated suicide bombings.

In the past week, the Nigerian military has carried out a cordon-and-search operation for fleeing Boko Haram members. The head of the operation said more than 30 houses were searched, based on information that high-level Boko Haram suspects had infiltrated an area in Maiduguri.

Maiduguri, the Borno state capital, is the birthplace of Boko Haram and remains the epicenter of the group’s insurgency, which began in 2009. Several parts of the state have seen a spike in Boko Haram attacks in the past six months.

Intelligence officer Lieutenant Aliko Ibrahim El-Rasheed told VOA there have been at least 37 attacks in Maiduguri and nearby areas in the past two weeks and more than 100 in the past six months.

El-Rasheed said the weather has contributed to the sharp increase because the air force and navy can’t patrol effectively during the rainy season. He said another big factor was local support for the group. 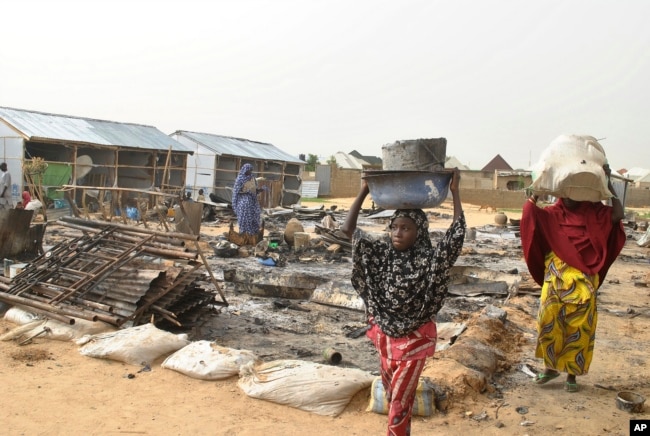 FILE – People walk through the debris at a camp for people displaced following an explosion by Islamist extremists, in Maiduguri, Nigeria, June 8, 2017.

“Boko Haram has a substantial level of local support and they also have sympathizers,” he said. “Let me just tell you the fact: If you count one, two, three houses in Maiduguri, the third one, definitely, one of those household members is a member of Boko Haram.”

One property searched in the recent raids included a U.N.-rented residence. Workers of several humanitarian organizations use the compound, known as “Red Roof.”

There were rumors that the commander of Boko Haram, Abubakar Shekau, was hiding there. He released a video last month claiming that he was in Maiduguri.

After the searches, the military said there were no arrests and no suspects were found.

“Nobody has ever said, especially on the part of the Nigerian army, said Shekau was dead,” Brigadier General Sani Usman told journalists recently. “The deadline for the capture of Shekau either dead or alive will be accomplished.”

Across Maiduguri, residents have noticed the increased presence of the Nigerian military. Convoys containing military service chiefs can often be seen on the streets. 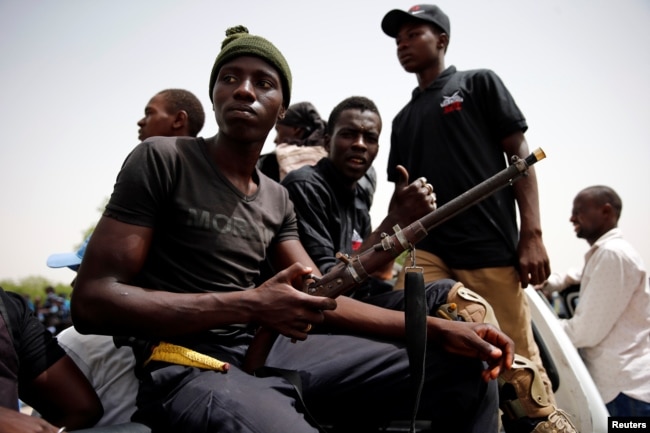 FILE – Members of a local militia, otherwise known as CJTF, sit in the back of a truck during a patrol in the city of Maiduguri, northern Nigeria, June 9, 2017.

Longtime Maiduguri resident Bulus Mungopark works as a humanitarian contract worker and an ad hoc member of the vigilante force. He said he was skeptical about how much good the deployment of military chiefs to Maiduguri could do, and that he was not relying on the government to protect his wife and three young children.

“If I heard the news of attack from somewhere, what I do is quickly move my family to a safer location,” he said. “That is what I will be doing for now.”

Mungopark lives near the University of Maiduguri, which has been repeatedly attacked this year. The school has ramped up efforts to complete a 27-kilometer earthen trench around the campus. It is an effort to make the university safer in time for classes to resume in November.

Do not play with lion’s tail’: Iran’s president warns Trump