The United Nations General Assembly voted on Thursday by 128 to nine to declare US President Donald Trump’s move to recognize Jerusalem as Israel’s capital “null and void.”

Despite the humiliation, both the United States and Israel claimed a degree of victory by highlighting the fact that 65 countries did not vote in favor of the resolution condemning Washington. They got the number by adding up “no” votes, abstentions and no-shows.

Among the 193 members of the UN General Assembly, nine voted against the resolution, 35 abstained and 21 countries did not turn up.

US Ambassador to the UN Nikki Haley tweeted that “65 countries refused to condemn the United States over its decision on Jerusalem, adding that the US appreciates these countries “for not falling to the irresponsible ways of the UN.”

“While the resolution passed, the vote breakdown tells a different story,” said a spokesperson for the US mission to the UN. “It’s clear that many countries prioritized their relationship with the United States over an unproductive attempt to isolate us for a decision that was our sovereign right to make.”

Raphael Ahren, a diplomatic correspondent at The Times of Israel, said in a commentary that “Israel’s massive defeat at the UN isn’t quite as bad as it looks.” 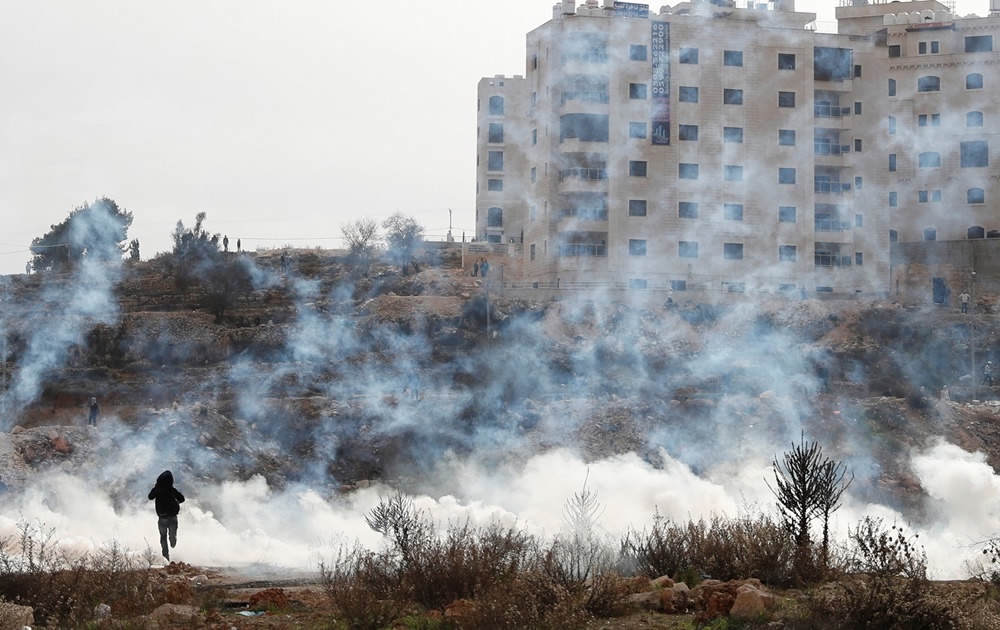 Israeli forces fire teargas canisters during a protest against US President Donald Trump’s decision to recognize Jerusalem as the capital of Israel, near the Jewish settlement of Beit El, near the West Bank city of Ramallah, December 21, 2017. /Reuters Photo

The result “may not really matter much on the ground,” he said, noting that it is “just one more non-binding UN resolution.”

Did Trump’s threats make a difference?

Trump’s decision on December 6 to recognize Jerusalem as Israel’s capital prompted a flurry of appeals to the UN. The status of the Holy City is one of the thorniest issues in the Israeli-Palestinian conflict.

Thursday’s special session of the General Assembly was held at the request of Arab and Muslim countries after the US vetoed a draft resolution on Monday in the 15-member Security Council.

Trump had threatened to cut off financial aid to countries that would vote in favor of the resolution.

Ukraine, which had supported the same resolution in the Security Council, was among the 21 countries that did not turn up for the vote on Thursday, indicating that Trump’s threats did have a “chilling effect” on some governments, an AFP report said.

Canada and Mexico, two neighboring countries of the US in the midst of a tough renegotiation of the North American Free Trade Agreement, were among the 35 countries that abstained.

A protectionist Trump administration has threatened to withdraw from the deal.

“We are disappointed that this resolution is one sided and does not advance prospects for peace to which we aspire, which is why we have abstained on today’s vote,” Marc-Andre Blanchard, Canada’s UN ambassador told the General Assembly.

Mexico has aligned its foreign policy more closely with Washington since Trump took office in an attempt to gain more leverage in the trade talks, the AFP report said, citing the views of some diplomats.

Guatemala, Honduras, Israel, the Marshall Islands, Micronesia, Nauru, Palau and Togo joined the US in voting no. 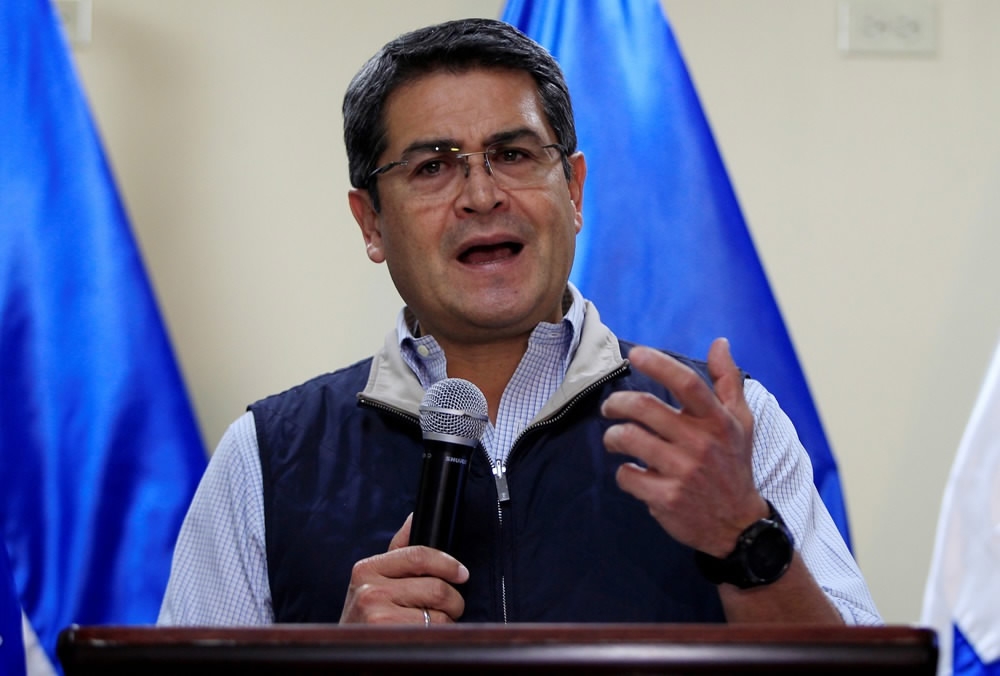 The “no” vote by Honduras comes after Washington signaled it would recognize incumbent President Juan Orlando Hernandez as the winner of a disputed election.

Earlier this week, the Trump administration decided to side with Hernandez over his rival Salvador Nasralla, ignoring calls by the Organization of America States for a new election over fraud claims.

Though the vote is not legally binding, it is a “considerable embarrassment” for Washington because it reflects global stance, Mythili Sampathkumar, a reporter for British newspaper The Independent wrote. 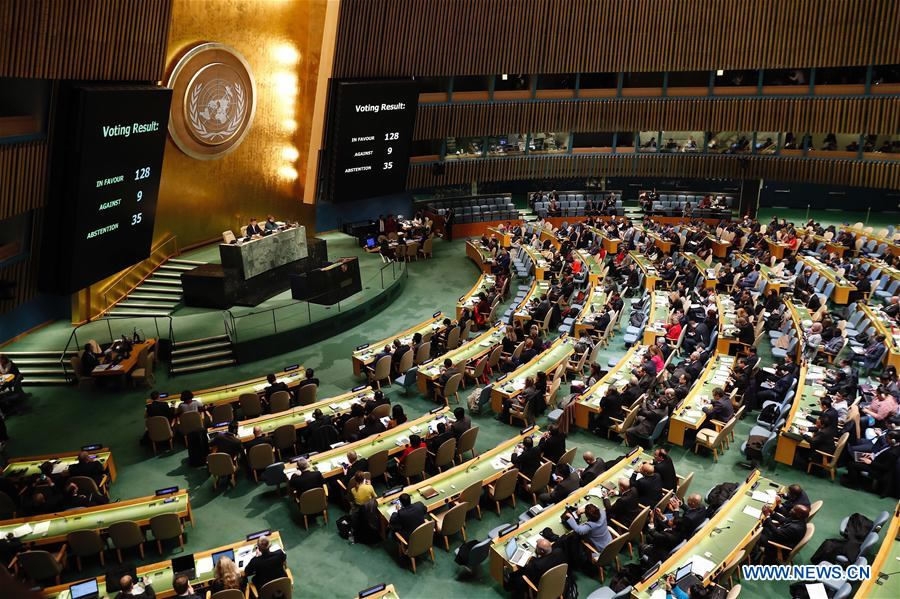 A rare emergency special session of the United Nations General Assembly held at the UN headquarters in New York, US, December 21, 2017. /Xinhua Photo

The fact that the resolution passed with about two-thirds of the 193 members voting yes showed widespread opposition to Trump’s Jerusalem decision in the international community.

In the words of Palestinian UN envoy Riyad Mansour, the vote was a “massive setback” for the US.

“They did not make it about Jerusalem, so when you make it about them and to only be able to get nine votes to say ‘no’ to it, I think it was a complete failure for their campaign,” Mansour said, insisting the vote was more about Trump’s foreign policy approach than the status of Jerusalem. Shen Bo, minister-counselor of China’s mission to the UN, reiterated Beijing’s support for a state of Palestine with East Jerusalem as its capital.

“We support the cause of the Palestinian people in restoring their legal rights and support the establishment of an independent state of Palestine based on 1967 borders with East Jerusalem as its capital with full sovereignty. China’s position will never change,” he stressed.