Governments around the world are increasingly shutting down internet access in an apparent attempt to silence discontent and dissent, activists say.

In 2017, internet access was cut off more than 80 times around the world, up from 56 times the year before, drawing concerns from digital rights activists.

“We do see this as evidence for a global trend in the wrong direction,” Peter Micek of Access Now told Al Jazeera.

One of the countries that have seen several shutdowns in the past year is Cameroon. People in the Anglophone region of the West African nation erupted in protests against the imposition of the French language, which is spoken by the majority of the population.

The blockage, implemented in early October after protests against the Cameroonian government, was the second shutdown in Anglophone regions in 2017. From January to April, all internet access was cut.

The United Nations, human rights organisations, and even the pope condemned the first shutdown.

“Rather than dialogue, the government embarked on a crackdown and shutting down the internet was a way of stopping the world from seeing or hearing about the atrocities being committed and stopping information flow between groups planning peaceful demonstrations and civil disobedience,” Cameroonian human rights activist Judith Nwana told Al Jazeera.

For Nwana, the issue goes further than her home country. According to her, governments that feel threatened can use the internet as another repressive tool, with no consequences.

“Every time I hear of an episode of internet shutdown I feel very frustrated. They are becoming more frequent, which reflects the fact that governments know they can get away with it with no repercussions,” she said.

Nwana’s claim that shutdowns are happening more often is backed up by research from the Brookings Institute and Access Now.

China has for years had the “great Chinese firewall”, which severely restricts internet access.

Syria, engulfed in a civil war for almost seven years, has been subjected to several blackouts since the conflict began.

For people in Iran, the power authorities have over the internet became apparent again in December when protesters took to the streets. Social media and messaging apps were blocked by the government to prevent demonstrators from organising.

As with Iran and Syria, political unrest is often the catalyst for authorities to sever internet access. Sudan, Myanmar, Ethiopia and Egypt all took to using the so-called “kill switch” when people gathered on the streets to protest their respective governments.

“Edward Snowden sent out a tweet last year which stated that once shutdowns become the norm in places like Cameroon and nobody says anything about it, this type of behaviour tends to spread to other places,” Micek said. 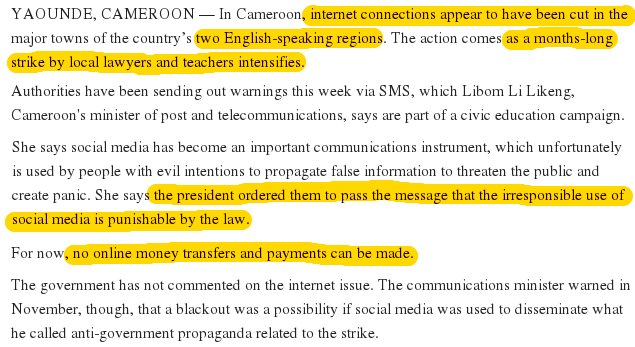 This is the future of repression. If we do not fight it there, it will happen here. #KeepItOn #BringBackOurInternet http://www.voanews.com/a/cameroon-cuts-internet-in-english-speaking-regions/3682688.html …

India, the world’s largest democracy, regularly bans people in Indian-administered Kashmir and other places from accessing social media and other websites. The country has even codified when the government has the right to turn off the internet.

Last February, a New Delhi-based non-profit, Software Freedom Law Centre, launched a website that tracks when and where access was shut off in India.

Late last year, the Spanish government blocked certain websites related to a referendumin the Catalonia region in a bid to prevent people from obtaining information about the controversial vote.

And when a country orders a shutdown of the internet, there is not much that can be done by its citizens, private companies, or the international community.

What can the UN do if your country cuts the internet?

“There should be a way of pressuring or sanctioning the perpetrators so shutdowns can be lifted as soon as possible. Failing that, it should be a case of putting that government to shame and under pressure through media coverage, advocacy and diplomacy,” Nwana said.

Micek said he thinks the only option to get the internet switched back on is to hit blocking countries where it hurts, namely their wallets.

“The International Monetary Fund (IMF) issued a loan of hundreds of millions of dollars to Cameroon, which came shortly after the first shutdown in January 2017. What message does this send when an international finance institution throws treasure at governments that clearly disrespect the rights of its citizens?” Micek said.

“Many institutions just need to quietly express their frustration and put down some real consequences, make the governments feel the pain that the citizens are put through.”

But Cameroonians are not willing to wait for others to intervene, so they have recently taken authorities to the Cameroonian Constitutional and High courts with the help of Access Now and Internet Sans Frontieres.

The lawsuit says Anglophones are being discriminated against since the shutdowns are only happening in English-speaking areas. It also states the ban is in violation of several international human rights charters signed by Cameroon.

“Depriving people of the internet interferes with a range of fundamental human rights,” the lawsuit states, citing the United Nations and the European Court of Human Rights.

The case comes several months before the October elections, which may be heavily affected by the closures, according to Nwana.

She is not sure if elections should even take place at all given the current state of the country, she said.

“For successful elections anytime this year in Cameroon, registration, campaigning and dissemination of information should be going on right now. Most people, especially the young who form the larger proportion of the population, get their information via social media,” Nwana said.

“How are elections going to be planned or made possible in those regions with internet restrictions right now?”

Micek agreed that having elections under the current circumstances might not be a good idea, not just for Cameroon, but for any country that shuts down the internet.

“When you have an entire population that’s silenced and shut out of political discourse, that’s not a recipe for a healthy and stable democracy.”