After making an unplanned stop in Brussels to meet with European leaders, the US secretary of State, Mike Pompeo is due to discuss arms control, election interference, and Iran with Russia’s president in Sochi. Ukraine, Venezuela, and North Korea will reportedly round out the agenda.

But this was after sharing intelligence reports with the US allies in Brussels where he was cautioned on military action against Iran.

Earlier, Pompeo canceled his planned visit to Moscow and instead met with European counterparts in Brussels on Monday as the US raises the specter of conflict with Iran.
State Department special representative for Iran Brian Hook told reporters following the day’s meetings that Pompeo “shared information and intelligence with allies and discussed the multiple plot vectors emerging from Iran.”
According to a senior European diplomat, Pompeo decided to make the last-minute change because leaders from the European Union were already planning to meet to discuss recent developments in Iran. However, Pompeo did not participate in their joint meeting and instead held bilateral meetings with UK Foreign Secretary Jeremy Hunt, German Foreign Minister Heiko Maas and French Foreign Minister French Foreign Minister Jean-Yves Le Drian. Pompeo also met with NATO Secretary General and EU Foreign Policy Chief Frederica Mogherini.
Hook described the meetings as “very good.” He said that Iran was the principle topic of the bilateral meetings, but that Pompeo also discussed Venezuela, Ukraine, Syria, Libya and “issues relating to NATO.”
Shortly following Pompeo’s meetings, US President Donald Trump warned that “it would be a very bad mistake” if Iran does anything.
“If they do anything — I’m hearing little stories about Iran. If they do anything they will suffer greatly. We’ll see what happens with Iran,” Trump said in the Oval Office Monday.
The meeting of the EU foreign ministers was planned before four cargo ships — two Saudi, one UAE, and one Norwegian — were targeted in what authorities have claimed are sabotage operations, the European diplomat said. On Thursday, the US Maritime Administration issued an advisory warning that “Iran or its proxies” could be targeting commercial vessels and oil production infrastructure in the region. Iran’s Foreign Ministry spokesperson Seyyed Abbas Mousavi said on Monday that the incidents were “alarming and regrettable,” and requested further information on the alleged sabotage. Hook said Pompeo discussed the incident in his meetings, but the State Department envoy had no comment when asked whether he believed Iran played a role. 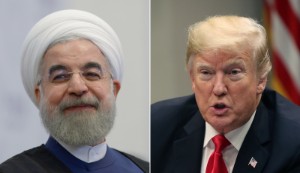 Hook on Monday sought to downplay the differences between the US and its European allies on Iran and emphasize their shared concern for stability in the region.
“We know our European allies share the same concerns we do about peace and security in the Middle East so when we have credible threats, we want to share them, we want to have a good discussion about the way forward and hear what’s on their mind,” he said.
Diplomatic sources who spoke to CNN said Pompeo was unable to answer questions about the Trump administration’s Iran strategy.
One senior European diplomat said the meeting went “as expected.”
“We didn’t expect they would have much to say on policy, moving forward. So this was as expected: an exercise in information sharing,” they said.
Another senior European diplomat said that Pompeo did not tell them how the US intends to avoid further escalation with Iran or what the US would do if Iran resumes full-scale enrichment. They described the meeting as “both useful and frustrating since we compared notes and information but failed to identify the rationale and the objectives of the maximal pressure.” That diplomat said European allies remained concerned with the Trump administration’s policy writ large when it comes to Iran.
Following her meeting with Pompeo, Mogherini stressed the importance of dialogue, including with Iran, amid the tensions. She said that she and the other EU ministers made clear to Pompeo that they believe “the most responsible attitude to take” is that of “maximum restraint and avoiding any escalation on a military side.”
“We still invite Iran to comply with all its nuclear commitments and we will do our part on our side to continue to fully implement the nuclear deal,” she noted.
The UK foriegn secretary noted on Twitter that “we have serious concerns about the potential for escalation,” but that the landmark nuclear deal was “critical to avoiding spread of the most dangerous weapons in the most unstable part of the world.” Hunt called on Iran to “stick with all its commitments.”
Maas, in a tweet from the German Foreign Office, noted that while the US and Germany’s “views on the #JCPoA differ, we have the same objectives. No nuclear weapons for Iran, and a different role for Iran in the region.”
“It is important for us to communicate on this issue as well and as often as we can,” thetweet said.

On Tuesday, Pompeo will proceed as planned to Sochi, Russia, to meet with President Vladimir Putin and other Russian leaders.
Hook said Iran would be on the agenda and made specific reference to its “destabilizing role in Syria.”
“We know that it is in Russia’s interest to stabilize Syria and as long as Iran is using Syria as a missile platform to advance its foreign policy objectives, it will not be stable,” Hook said.
In addition to their discussion of Iran, Putin, Pompeo Russian Foreign Minister Sergey Lavrov are expected to have “frank discussions” on a broad range of multilateral and bilateral issues, including arms control, Ukraine, Venezuela, and North Korea, a senior State Department official said last week. 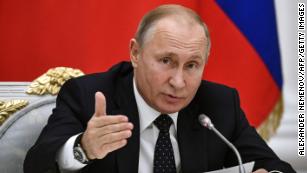 “It is no secret that we have many areas of disagreement with the Russian government,” the senior State Department official told reporters Friday. “The secretary will have a very candid conversation about concerns in our bilateral relationship” including Russia’s breach of the Intermediate-Range Nuclear Forces Treaty and “Kremlin-backed attempts to meddle in US and other foreign elections.”
Russia also continues to hold US citizens, including Paul Whelan and Michael Calvey, in detention, where they have been denied adequate consular services, according to US officials. The state department official said Pompeo was expected to raise that issue during his meetings.
However, the official also noted that there are areas where the US is working jointly with Russia, such as the Afghan peace process and counterterrorism.

US steps up military preparations

The US late last week announced it will deploy additional Patriot missiles to the Middle East.
CNN has reported that intelligence has shown that Iran is likely moving short-range ballistic missiles and cruise missiles aboard boats in the Persian Gulf. The US military believes that cruise missiles could be launched from the small Iranian boats, which are known as dhows. Officials have said those boats are IRGC naval assets, not regular Iranian navy boats.
The carrier Abraham Lincoln, deployed by US President Donald Trump’s administration to the Middle East as a warning to Iran, passed through Egypt’s Suez Canal on Thursday and is currently sailing in the Red Sea.
On Friday a defense official reiterated that the Iranian threat “is still real and credible and we’re taking it seriously.”
The deployment of the Arlington and Patriot missile battery is “meant to be defensive in nature,” the official said.
Credits| CNN
Post Views: 190
Social media sharing

Quit notice: IYC vow to retaliate attack on any southerner in the north