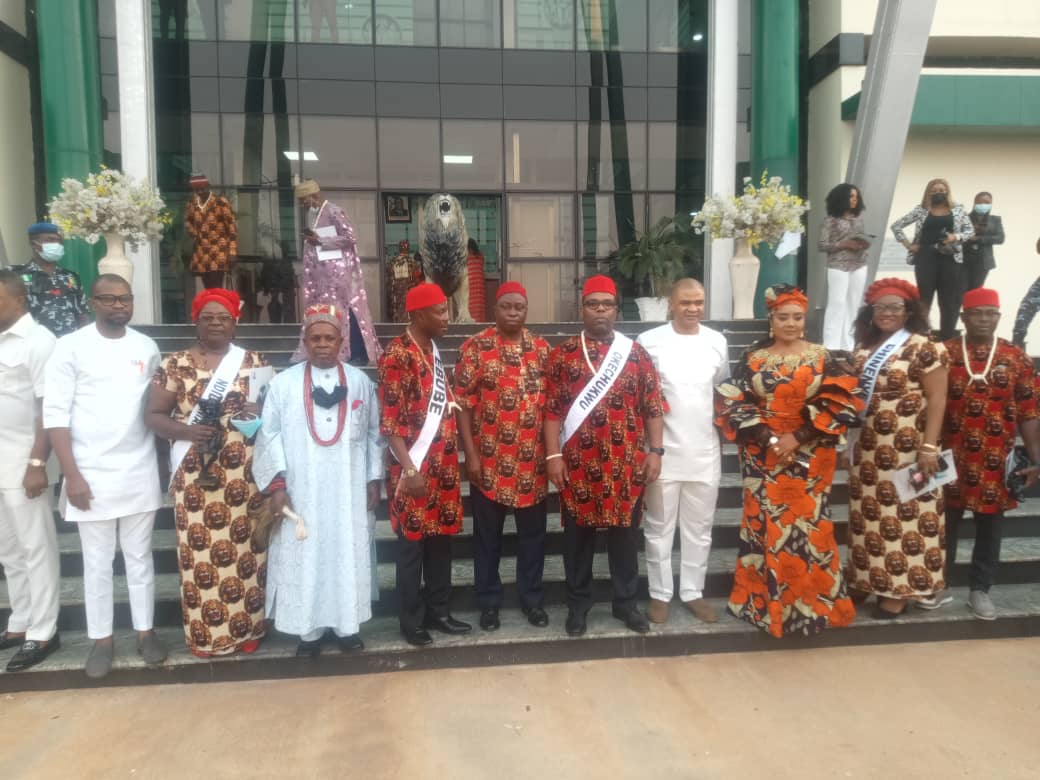 There was excitement,  fulfilment when  Governor of Enugu State, Ifeanyi Ugwuanyi received a delegation from Haiti, who traced their origin back to the state.

The 10-man delegation from Haiti, a country in North America delegation was led by Senator Moise Jean-Charles, who is also the Presidential aspirant and candidate in the country at the weekend. They were on a home-coming mission to Enugu, the historic capital of Igboland, to perform conventional Igbo rituals such as traditional naming and name adoption, 218 years after they attempted to trace their roots to Igboland.

Governor Ugwuanyi who recieved the delegation at the government house, delightfully welcomed them to Enugu State in particular and the entire Igboland in general, and commended them for the bold step.

The Governor who was represented by the Secretary to the State Government (SSG), Prof. Simon Uchenna Ortuanya, also appreciated them for “keeping a date with history, for following your heart, and for following your roots and getting back to your roots”, adding that “today is a new beginning for all of us”.

He added: “We open our doors to you and we are ready as we have demonstrated. We also want you to know that changing your names is in agreement with the Igbo tradition that you have a new name for a new born. Today, you are born new in Enugu State and in the land of your fathers. Congratulations!”

In his address, the leader of the delegation, Sen. Jean-Charles, who described the visit to Enugu State as home-coming, rooting back to their origin in Igboland, thanked Governor Ugwuanyi for the hospitality accorded to them in the state.

He recounted the affinity of the people and culture of Enugu State and Haiti, revealing that Enugu has five letters as Haiti and that Enugu and Haiti mean cities on top of a hill.

“I have visited many countries, many places around the world but this is the first time I have visited a country that everybody looks like me,” he said.

“I have not come here as a foreign person. I have come back home. Before I keep on talking, I want to on behalf of all Haitians, all the blocks in Haiti, to thank you (Ugwuanyi) for receiving us after 218 years.

“We have decided that people in the whole continent of Africa and all of us who are there in Haiti are a wind following the bird from the African continent and it has brought bear in America which means all of us are one,” he further said.

In their separate goodwill messages, the Commissioner for Culture and Tourism, Hon. Ugonna Ibe, the Chairman, Enugu State Council of Traditional Rulers, HRH Igwe Lawrence Agubuzu, the immediate past President General of Ohaneze Ndigbo, Chief Nnia Nwodo and Ozo (Dr.) Ferdinand Anikwe, gave a historic background of the Haitians and their link with Igbos, applauding the visitors for taking such a bold step in identifying with the people of their origin.

The climaxes of the event were the traditional naming and name adoption by the Haitian delegation, which were performed by Igwe Agubuzu in company of other traditional rulers present, dancing of Igede cultural dance by the visitors, and presentation of souvenirs to them by Enugu State government.

The senator made this known to Nigerians on his Facebook page on Saturday, 22nd of January 2022. “This afternoon, I received in audience the presidential candidate in the upcoming Haiti Presidential election and the Secretary general Party Politique Pitit Dessalines,  I wish him well in his quest to rule Haiti Nation ” he said.

Senator Charles was a candidate for President of Haiti in 2015. He served a term as Senator for the Nord Department and before that served three consecutive terms as the Mayor of Milot.

Haiti is a Caribbean country that shares the island of Hispaniola with the Dominican Republic to its east. The continent of the country is north America.

Though it’s still recovering from a 2010 earthquake, many of Haiti’s landmarks dating to the early 19th century remain intact.

What can you say about the meeting of these tow great men, share and follow us for more update