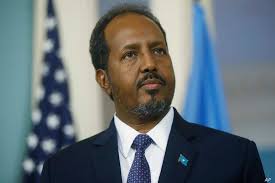 President Muhammadu Buhari has congratulated the newly elected Somali President, Hassan Sheikh Mahmud, advising him to unite with other African leaders in the fight against terrorism in the region.

In a signed statement issued Wednesday by his spokesman Garba Shehu, Buhari assured the Somali President of Nigeria’s continuous support on peace keeping.

According to the statement, the re-election of Hassan Mahmud was a signal that the people of Somalia acknowledge his call for unity.

The statement noted further that, Mahmud’s re-election is a show of approval in his leadership skills by the people of Somali as well as their believe in democracy.

“African countries must unite against terrorists and other evil forces seeking to disrupt and destroy our territories.Nigeria will continue its usual support for peace keeping efforts in Somalia.

“Other political parties and leaders in the country should unite and rally round President Mahmud in the difficult task of rebuilding Somalia from the ruins of war and terrorist devastations,” the statement said.

“President Mahmud’s return to power is a resounding vote of confidence in his ability and leadership skills, which he had demonstrated while he was previously in power, but most importantly signifies that Somalians are committed to a democratic process,” it added.

Buhari also commended the out-going president, Mohamed Abdullahi Mohamed Farmaajo, for his swift acceptance that lead to a peaceful transition, in the best interest of the people.