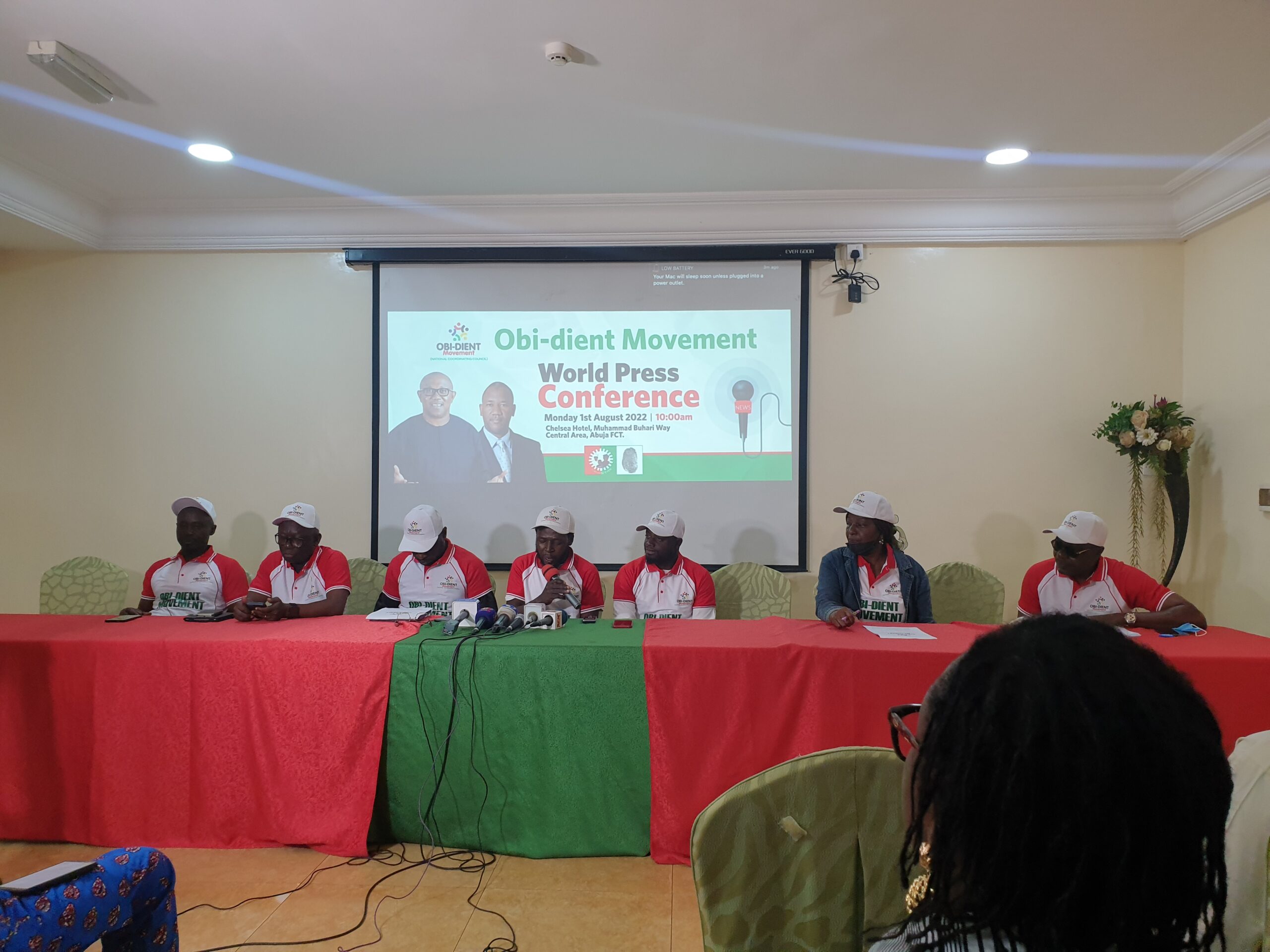 The Obi-dient Movement,  a support group for the Labour Party’s presidential candidate, Peter Obi  has  knocked the Muhammadu Buhari led administration over the “deteriorating “economic and  security situation across the country.

The Movement lamented that Nigeria is facing the worst security situation since independence in 1960, but President Muhammadu Buhari is confused and  has evidently shown that he lacks the capacity to salvage the country from the worsening situation.

Adang Azi Adang, Director of Strategy, National Coordinating Council (NCC) of the Obi-dient movement, raised this concern while addressing a press conference in Abuja on Monday.

“There is no doubt that Nigeria under President Muhammadu Buhari is bedeviled and buffeted by a myriad of security challenges never seen or experienced since our independence in 1960.

“The country has indeed been confronted with diverse security threats ranging from election violence, census crises, ethnoreligious conflicts, communal clashes, militancy, and terrorism but most of these were either localised or sporadic before this administration,”Adang said

He further said, “Unfortunately, what we have been witnessing since 2015 is the amalgamation and molten mix of all these crises, all happening simultaneously, unhindered and in a terrifying fashion across Nigeria. Nowhere is safe in the 36 States of the country with road, rail and air travels constituting a nightmare for Nigerians.

“The country is under the siege of terrorists, bandits and other criminal gangs holding sway over swaths of ungoverned territories from the North to the South, East, and West. The most disheartening of these challenges is the fact that there is swell-orchestrated plan by foreign terrorists with their sponsors to cause more havoc and entrench a chaotic atmosphere and a dangerous agenda. While the daily killings and bloodletting of Nigerians have continued unabated under the All Progressives Congress (APC) led Federal Government.

“To make matters worse, President Buhari’s Administration from all indications looks dazed, clueless and incapable of taming the deteriorating economic and political situation in the country. Similarly, the country’s economy is in shambles with little or no effort to turn things around.”

He further lamented that the All Progressives People Congress (APC);and the Buhari administration have failed woefully in all indices and indicators of good governance, explaining that they failed miserably to deliver on the three key areas they anchored their administration on, which are to improve security,  the economy and anti-corruption fight.

The Direcetor therefore stated that the only person that can galvanise the country out of the doldrums is Mr. Peter Obi, saying he has teh qualities of a hands-on 21st century leader who, according to him, understands the dynamics of governance both at local, national and global levels

“Fortunately,  in a period where the old hawks have polluted the electoral system with money politics, Nigerian youths have risen to say “never again”.  This is with the view that this may be the last opportunity to rescue our ailing economy,  blunt security architecture and save Nigerians from extreme poverty,” he said.

“This is why, for the obidient movement, the 2023 elections are a make-or-mar decision for Nigerians.  The Movement believed that the country cannot continue in the trajectory of hopelessness,” Adang stated.

Dan Musa, Cordinator, Northeast,  noted that the mobilisation for Obi-Datti presidency is gaining momentum in the Northwest . He informed that the region had 22 million registered voters as at 4th July.

This, according to him, is driven by the wave of banditry,  kidnapoung and other forms of criminality in the region.  He said, “If we are talking about structures,  come to the northwest, you’ll see people mobilising for perter obi and Dr Datti, the people who are ravaged by banditry, terrorism, kidnappings are the structure.”

While noting that a Peter Obi presidency is possible,  be urged Nigerians to join the movement to “take back out country.”

“We tried of unemployment,  we are tired of the banditry, we are tired that our roads are not safe again. And come 2023 we will show the two parties that Nigeria can be great again,” he said.