Cameroonian separatists did not attack any Nigerian community – Army 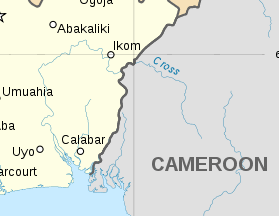 The Nigerian Army on Thursday said no community in Nigeria was attacked by the Ambazonian separatists from Cameroon.

The militants had reportedly invaded Bashu, a community in Boki local government area of Cross River State on Sunday to attack their compatriots who fled and allegedly refused to join them to fight Cameroonian government, killing 20 persons.

But the Army in a statement signed by its spokesperson,  Brigadier General Onyema Nwachukwu said the separatists attacked Obonyi 2 and Njasha, both of which are communities located in the Republic of Cameroon. The Army also said four victims of the attack, who crossed over to Nigerian territory were later rescued by Nigerian troops and operatives of Nigerian Immigration Services.

“The attack was therefore not within Nigerian territory as claimed,” the statement read.

“The Nigerian Army has been notified of a statement insinuating that Nigerian villages were attacked by Cameroonian ( Ambazonian) seperatists on 29 May 2022.

Contrary to the misinformation, own troops deployed at Danare received  information on Sunday morning  about the said attack.

“The troops immediately mobilised to Bashu community, which was allegedly under attack. On their arrival, it was revealed that Bashu was not under attack and no external incursion was recorded. Members of the public are enjoined to disregard the unsubstantiated information and not panic,” the statement added.