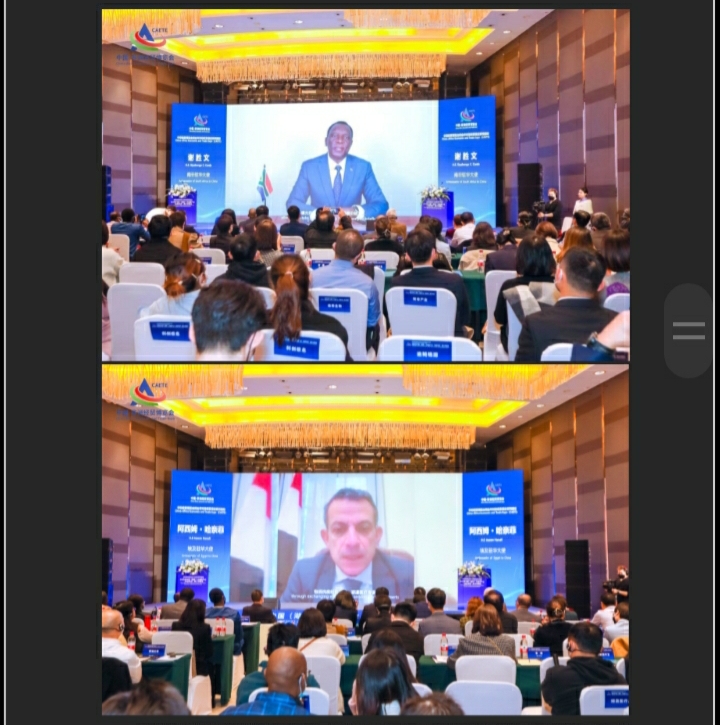 The firms also had in-depth discussions on the project demand, market situation, product supply, and other cooperation intent.

Chinese Authorities at the conference described Africa as an important development partner, and strives to build a whole industrial chain with health and biomedical sectors as the core.

At the conference, the Trade Commissioner of the Trade Office of the Consulate General of Nigeria in Shanghai, China, Hassan Mohammed has urged Chinese investors to invest in Nigeria’s health industry, so as to promote the economic and trade exchanges between the two countries.

It is one of the gap year events of the China-Africa Economic and Trade Expo (CAETE). Sponsored by the Department of Commerce of Hunan Province and Management Committee of Hunan Xiangjiang New Area. It is organized by Changsha Municipal Bureau of Commerce and co-organized by Arshine Group, Hunan Going Global Investment & Economic Service Platform Changsha-Zhuzhou-Xiangtan Center (Changsha), and Overseas Home China-Africa Cooperation Service Center.

The conference also had in attendance more than 130 African enterprises from over 20 African countries and 150 Chinese enterprises joined this conference and completed over 150 rounds of online negotiations.

Mr. Chen Dayang pointed out that we should combine Hunan’s advantages with Africa’s endowment, so as to better enhance the cooperation in the health industry between China and Africa, establish long-term communication and exchange mechanisms, and implement more projects.

According to H.E. Siyabonga C. Cwele, the pharmaceutical and medical device sectors in South Africa have maintained good and strong momentum over the past decade, and he hoped that we can seize this opportunity and translate the cooperation potential into practical results. According to H.E. Assem Hanafi, Egypt is one of the most industrialized countries in the Middle East and Africa. In recent years, the China-Egypt relationship has been flourishing. Since the beginning of COVID-19, Egypt and China have stood together to jointly fight the pandemic.

Both countries signed an agreement in 2021 for the first joint production of the Sinovac vaccine locally in Africa, in addition to a cooperation agreement in January 2022 to establish a cold storage facility for vaccine storage and preservation, which was successfully inaugurated last September and serves as a regional hub for vaccines in the African continent.

According to Ms. Zheng Ping, Director of Changsha Municipal Bureau of Commerce, in the first ten months this year, Changsha’s imports and exports with African countries reached 20.93 billion yuan, maintaining a rapid growth rate of 93%. Changsha has become a hub of China-Africa cooperation. She said that we hope the third China-Africa Economic and Trade Expo (CAETE) to be held next year can further drive the cooperation between Africa and Changsha to a new high.

The conference benefited from the spillover effect of two national-level China-Africa economic and trade platforms: China-Africa Economic and Trade Expo (CAETE) and the Pilot Zone for China-Africa Economic and Trade In-depth Cooperation. It facilitated online meetings, negotiations, and cooperation between African embassies and consulates in China, medical associations, medical product buyers, and major Chinese enterprises in the health industry, thus upgrading the cooperation between Hunan and Africa in the health industry.