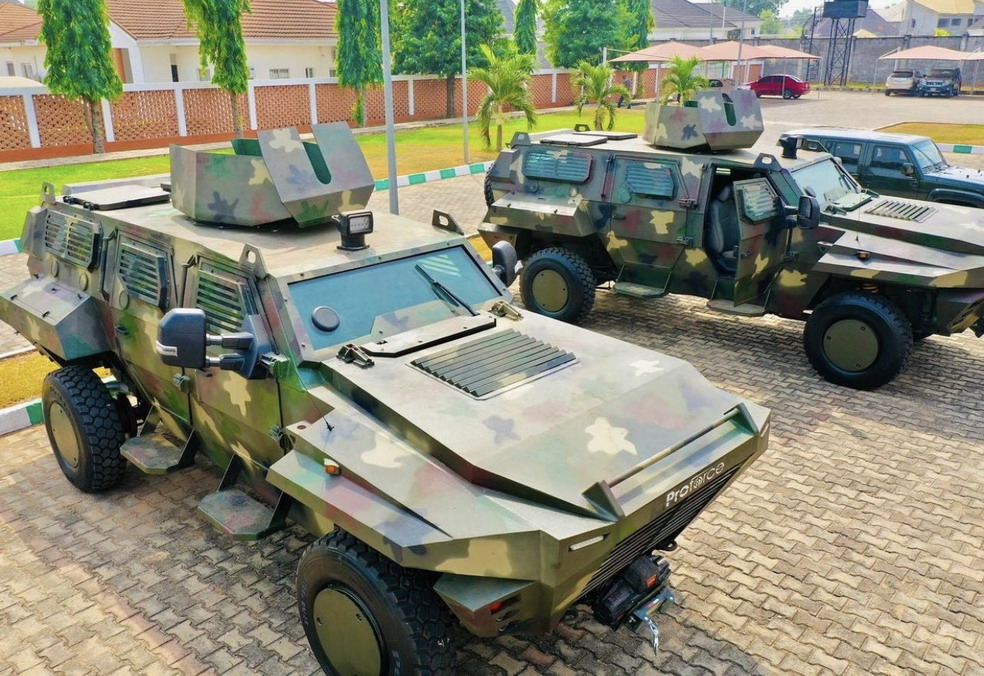 Nigeria’s Delta State government has delivered five Proforce armoured vehicles to the Nigerian Army’s 63 Brigade and Delta State Police as part of efforts to shore up security in the region.

The vehicles were handed over on 19 January by Governor Ifeanyi Okowa, represented by the Commissioner for Information, Charles Aniagwu. Proforce explained that the vehicles comprised two PF2 armoured personnel carriers (APCs), one Wizard II armoured vehicle, and two Viper APCs.

Three vehicles were given to the Nigerian Army and two to the Police. Okowa said the logistics needs of various other commands would be provided for over the course of the year.

He added that the Army has played a significant role in fighting to restore law and order in the country. Law enforcement efforts have seen a major drop in crime in Delta State over the last year.

Proforce’s PF2 is its flagship APC, which has been exported to Rwanda, the Central African Republic and South Sudan (it is used for United Nations peacekeeping missions in the CAR and South Sudan). At home, the Nigerian Police Force has acquired a number of PF2 APCs, and this includes by Rivers State, Osun State and Lagos State.

The PF2 features runflat tyres, B6 ballistic protection (up to 7.62×51 mm rounds) as well as blast protection against Land mines, hand grenades, IEDs, etc. (in excess of STANAG 4569 Level 1 to withstand L2A2 grenades).

The PF2 is powered by a 5.5 litre V8 engine developing 536 hp. It can accommodate eight to ten personnel and features eight gun ports.

The Wizard APC is built on a Toyota Land Cruiser chassis and has been supplied to the Nigerian Police and Central Bank of Nigeria. It is powered by a 4.5 litre V8 producing 202 hp and is armoured to B6+ level, with underbelly blast protection.

Proforce’s Viper is its latest APC and was launched in December last year. It is a lighter, faster and more manoeuvrable version of its Ara vehicle and has been designed for special forces use but can support a wide range of military, counter-terrorism, and police operations. Proforce literature states the vehicle offers excellent protection against both ballistic and blast threats, with the crew compartment protected to CEN Level B6 up to B7.

The vehicle has a 7 ton curb weight and payload of 1 500 kg. It can accept nine occupants, including a gunner. The Viper can be configured with a range of weapon platform options, including a manual or electric rotating turret. It is powered by a 6.7 litre V8 engine developing more than 300 hp and giving the 4×4 vehicle a top speed in excess of 110 km/h.

The Ara 2 has been exported to Chad, which acquired 20 vehicles after Denel failed to supply 40 Casspir vehicles under a 2017 contract. The Ara is also in service with Nigeria’s military.