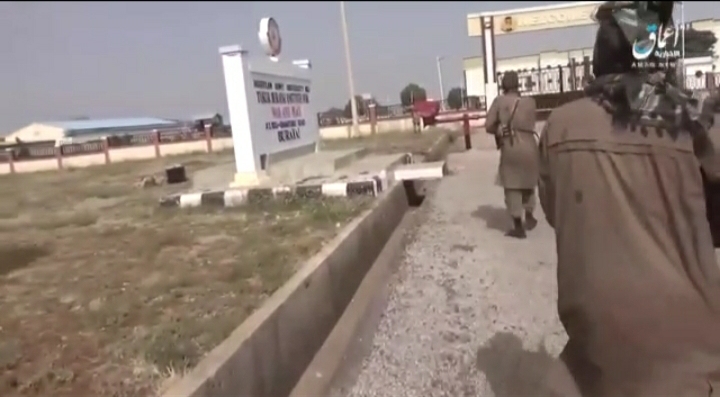 There were reports that ISWAP/Boko Haram terrorists attacked and abducted military and security personnel at Army Research Institute in Buratai and Police Training College in Gwoza, Borno State in January 2022.

Some media reports, especially on social media claimed that in both incidents security personnel were either abducted or killed.

Sources claimed the terrorist attacked the Gwoza Mobile Police Training School with gun trucks and shot sporadically into the air before allegedly kidnapping the instructors.

Similarly, there were videos in circulation where ISWAP terrorists were seen firing in different directions while ransacking the Army Institute. They also pulled down flags, shot heavy artillery and burnt military and official vehicles.

While the invasions and attacks on the Army Research Institute as well as the Police Training College were authoritatively confirmed by PRNigeria, there is no sufficient evidence to prove that military and security personnel were abducted and no evidence on the alleged looting of armouries at the two centres.

The terrorists attacked the Tukur Yusufu Buratai Institute for War and Peace (TBI), a research Institute of the Nigerian Army University, located in Buratai Village in Biu on Monday, December 10, 2022. Another group of terrorists invaded the Mobile Police Training School in Limankara, Gwoza LGA on Thursday, December 13, 2022.

The Borno State Commissioner of Police, Abdul Umar, confirmed repelling of the attack on the Police Mobile Training College, Gwoza by the terrorists.

He however disputed reports that some mobile police officers were abducted, and armoury looted by the insurgents. He said: “The police did not record a single casualty nor loss of firearms and no casualty on the part of the Police was recorded.” https://prnigeria.com/2022/01/14/police-personnel-gwoza/

Multiple calls were put through to various credible sources to cross-reference the police chief’s statement confirmed that there were no abductions or looting of the armoury.

In the same vein, PRNigeria used media monitoring and listening tool tools to scrap for any related footage that may buttress the claim but there was none.

Similarly, PRNigeria gathered from a senior military commander in the troubled zone who confirmed that while there was an insurgents’ invasion at the institute, no police or military personnel was abducted or killed. He added that at the time of the attack, most of the staff were yet to resume from the new year holiday.

“The attack occurred at the army research institute in Buratai and not at a military base as being speculated. Most staff including civilians were yet to return fully from the New Year break when the enemies invaded the place.

“The institute has no armoury that terrorists could attempt to loot. While no single army personnel was abducted or killed, regrettably two civilians died during the incident,” the commander said.

While there was were attacks on both the Police Training College, Gwoza and Buratai Institute in Biu Borno State, there was no evidence to prove abductions or looting of armouries. There is also no evidence of casualties on the side of the military and police personnel on both incidents.