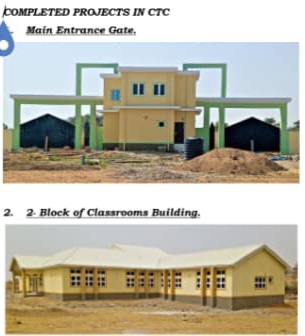 The Department of State Services (DSS) has debunked claims by a private organisation,  Tracka–BudgIT, that the Service’s Counter-Terrorism Centre in Bauchi state is not under construction despite budget provisions for it.

Tracka, had on February 19, 2022, posted on its social media platforms, particularly Facebook and Twitter, that the construction of DSS Counter-Terrorism Training Centre, Gubi Dam, Bauchi State allegedly valued at N1.1 Billion in 2021 Federal Government budget was “not done”.

It added that it “visited the site and discovered they only renovated a primary school and mosque adjacent to the site”. Tracka also alleged that in June 2021, 3 different payments of N52 million N39 million, and N59 million amounting to N152 Million were made for the construction of flats at the DSS centre, but said that as of Feb 2022, no construction was ongoing.

In response, the DSS, in a statement on Tuesday signed by its spokesperson, Mr Peter Afunnaya, described the publication as misleading.  The Service said, on the contrary,  construction was ongoing at the site.

“To set the records straight, the DSS outrightly dismisses Tracka’s unfounded claims.  It further expresses dismay at the shoddy way Tracka embarked on its project verification exercise as well as the manner it concluded without the slightest efforts to be diligent.

“DSS’ findings have shown that the Tracka Field Officer did not visit the project site where about 17 structures are simultaneously being executed by different contractors. It is instructive to note that the projects are at different levels of completion,” the service state.

It also noted that the primary school in question was a dilapidated Nomadic Education Centre located at Galga, near Gubi Dam, Firo where the CTC is located, and that the Service, in conjunction with its Land School (site of the CTC), found the primary school in a bad state and decided to renovate it as part of its Corporate Social Responsibility.

The DSS also released pictures to prove that the said school was rehabilitated and handed over to the appreciative Galga community whose children now use better facilities including desks at the school.  It regretted that Tracka only stopped its verification of the budget implementation at the primary school from where it drew “hasty conclusions of non-implementation. What a lazy way of discharging a mandate.”

“Though not opposed to the pursuit of accountability and transparency by NGOs, the Service is averse to resorting to fake news and outright misinformation as a way of enlightening the public. To seek redress, the Service has brought the misinformation carried out by Tracka to its Management and in that regard sought a refutal and unreserved apology.

‘For the avoidance of doubt, the CTC projects as captured in 2019, 2020 and 2021 budgets are ongoing (See attached pictures of the site). The DSS and its Director-General, Alhaji Yusuf Magaji BICHI are committed to transparency, accountability and service. It is simply for his integrity that Mr Bichi was called out from retirement to head the foremost intelligence organization. He is not given to corrupt tendencies. So far, he has shown exemplary, purposeful and transformational leadership at the DSS.

“Accordingly, the public is hereby properly guided and should therefore disregard the initial story by Tracka, which is expected to show evidence that disciplinary action is being taken against the staff that misled it. This is how to be accountable and transparent.

“Meanwhile, the CTC is open to anyone who may wish to visit it to verify the level of work there. Going forward, the Service will not take lightly attempts by individuals or organisations like Tracka to defame it,” the statement read in part.