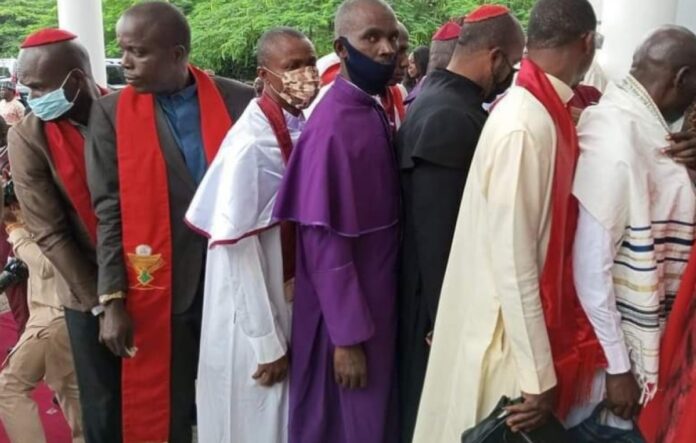 Claim: There is a claim trending on social media that all the Christian clerics/pastors/reverends that attended Kashim Shetima’s unveiling ceremony as running mate to All Progressives Congress (APC) presidential candidate, Bola Ahmed Tinubu are hired and fake.

Members of the Conference of Concerned Christians of Nigeria (CCCN) have joined the array of organisations and personalities condemning the appearance of some persons, who masqueraded as bishops and pastors at the unveiling of Senator Kashim Shettima, as the vice presidential candidate of the All Progressives Congress (APC).

“It was an admixture of disbelief and shock when dignitaries, including journalists, watched as some ‘bishops and pastors’ lined up – in what appeared like theatrical projection of the medieval kind – to give a fake seal to the heavily-criticised same faith ticket of the ruling APC.” It said.

The Christian Association of Nigeria (CAN) issued a statement disowning the clerics at the event, saying they were fake. The body said they were hired mechanics and artisans by the APC with robes on them to give the impression that they were bishops and pastors.

The Vice President of CAN (19 Northern States and Abuja) and chairman in Kaduna State, Rev. Joseph John Hayab, said Tinubu, was free to “hire mechanics and other artisans and sew clerical garments for them.”

He said, “The people we saw at the unveiling of Shettima paraded as Bishops are people who did not have enough time to learn how to wear Bishop garments. Take a closer look at their photo and you will see another Nollywood movie.”

Verification: in an extensive verification research by PRNigeria, it was gathered that not all the identities of the about “30” clerics dubbed as “Bishops” who attended the unveiling is publicly available.

However, identities of about 3 from over 30 of the ‘Bishops’ are verifiable. They include one with the name Bishop Kamoru from Lagos, who on Twitter is claimed be a cleric from Peace Chapel Mararaba. There are photo where some of the clerics  were conducting wedding and other services in churches with some members claimed to know them personally.

Meanwhile, while there is no evidence that Reverend Father Hyacinth Alia of Gboko Catholic Diocese Benue State attended the unveiling ceremony, he is a strong supporter and APC Governorship candidate in the state even though he was suspended by the ministry for joining the race.

Ugokwe has a Social Media Page – Rev Amb Ugo Ugokwe for APC Southeast Youth Leader, through which he runs his political movement and consultancy.

He addressed a press conference in Abuja to clarify the controversy. He said the clerics decision to attend the event was neither procured nor compelled, “rather, we chose, freely, to attend due to our sincere and genuine desire to express our goodwill and lend our support to a man whose tenure as the governor of Borno State heralded unprecedented support for the Christian faith in the region at the time.

“We were therefore appalled to see our intentions misrepresented and our integrity called into question. For the avoidance of doubt, we have never attempted to portray ourselves as representatives of the Christian Association of Nigeria. We went as clergymen and pastors called by God to serve in his vineyard and bring his word to our communities,” he concluded.

From a deep google research by PRNigeria, it was revealed that prince Ugokwe is the founder of “Yoke Breaker Prophetic Ministry” Abuja.

According to him, “Our organization, Muslims and Christians Love Foundation is a religious organization with an objective of ensuring that a religious crisis does not precipitate within the Nigerian nation by any group or association.”

Further research by PRNigeria also revealed that prince Amb. Ugokwe is an active member of APC in Anambra state.

Based on facts gathered so far by PRNigeria, the real identities of most of the ‘clerics’ are unknown, while a very few of them that are named and attended the unveiling of Shettima are APC members and recognised church leaders.