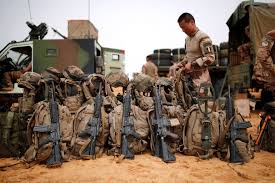 France announced Thursday that it was withdrawing its troops from Mali after a breakdown in relations with the country’s ruling junta, ending a near 10-year deployment against jihadist groups that pose a growing threat in West Africa.

France sent soldiers to its former colony in 2013 to beat back advancing Islamic extremists, but its initial battlefield success was followed by a grinding anti-insurgency operation and rising hostility from Malians.

Anger in Paris about the alleged arrival of Russian mercenaries from the Wagner group, as well as deepening ties between the Malian regime and Moscow, also hastened the French departure.

“We cannot remain militarily engaged alongside de facto authorities whose strategy and hidden aims we do not share,” President Emmanuel Macron told a news conference.

The French decision will see the departure of 2,400 troops from Mali, but fellow EU nations also announced that they would withdraw several hundred soldiers in the smaller European Takuba force that was created in 2020.

Macron “completely” rejected the idea that France had failed in its mission in Mali that has cost the lives of 48 soldiers, with another five dead across the wider Sahel region.

“What would have happened in 2013 if France had not chosen to intervene? You would for sure have had the collapse of the Malian state,” he said, adding that French troops had also killed the leaders of local al-Qaeda and Islamic State-affiliated groups.

Ex-president Francois Hollande, who was in power when France first sent the troops to Mali, agreed, telling AFP on Thursday: “If I had to do it again, I would.”

But he also said he would have pulled out the troops sooner than his successor.

France’s bases in Gossi, Menaka and Gao in Mali would be closed within the next four to six months in an “orderly” withdrawal, Macron said.

The announcement comes at a critical time for the 44-year-old French leader, who is expected to announce soon that he will stand for a second term at elections in April.

Macron’s priority will now be to ensure that the withdrawal does not invite comparisons with the chaotic US departure from Afghanistan last year.

“The big question is how we leave, and what we put in place to enable our forces to leave in the best possible security conditions,” Macron’s far-right opponent Marine Le Pen said.

– Spreading threat –
France and its European allies vowed to remain engaged in fighting terror in the Sahel, a vast and arid region below the Sahara desert that Macron has long argued is crucial for European security.

The French leader warned that Al-Qaeda and the Islamic State group had made this part of Africa “a priority for their strategy of expansion,” and said the European Takuba forces in Mali would be shifted to neighbouring Niger.

“All partners who wish to work with Mali in securing the country… are welcome,” Foreign Minister Abdoulaye Diop was quoted as saying in a statement released by the army.

Since the 2013 French deployment, rebels based in the inhospitable north of Mali have regrouped and moved into the centre, while also launching raids on neighbouring Burkina Faso and Niger.

New fears have emerged of a jihadist push toward the Gulf of Guinea, threatening Ghana, Ivory Coast, Togo and Benin.

Speaking alongside the French leader, Senegalese President Macky Sall said fighting “terrorism in the Sahel cannot be the business of African countries alone.”

Richard Moncrieff, an expert on the Sahel region for the International Crisis Group, a think-tank, said that France’s decision to leave Mali was “far from a surprise” given the tensions between France and Mali.

French daily Le Monde called the withdrawal “an inglorious end to an armed intervention that began in euphoria.”

Relations between France and Mali plunged after a coup in 2020 and current strongman Assimi Goita refused to stick to a calendar to return the country to civilian rule.

The West also accuses Mali of turning to the shadowy Wagner group to shore up its position amid growing Russian influence in the region.

– Wider impact –
Around 25,000 foreign troops are currently deployed in the Sahel.

They include around 4,600 French soldiers in a regional mission known as Barkhane that France was already planning to wind down.

In Mali, the UN peacekeeping mission MINUSMA and EUTM Mali, an EU military training mission, operate alongside Malian forces, but French soldiers backed by air power have long been seen as the most effective fighting force.

Macron said France would still provide air and medical support for MINUSMA in the coming months before transferring these responsibilities.

Olivier Salgado, the spokesman for MINUSMA, told AFP that France’s pullout was “bound to impact” the mission and the UN would “take the necessary steps to adapt.”

In Berlin, German Defence Minister Christine Lambrecht said she was “very sceptical” that the country’s mission in the EUTM could continue in the light of the French decision.