From Hiroshima to Ukraine: The return of the nuclear threat 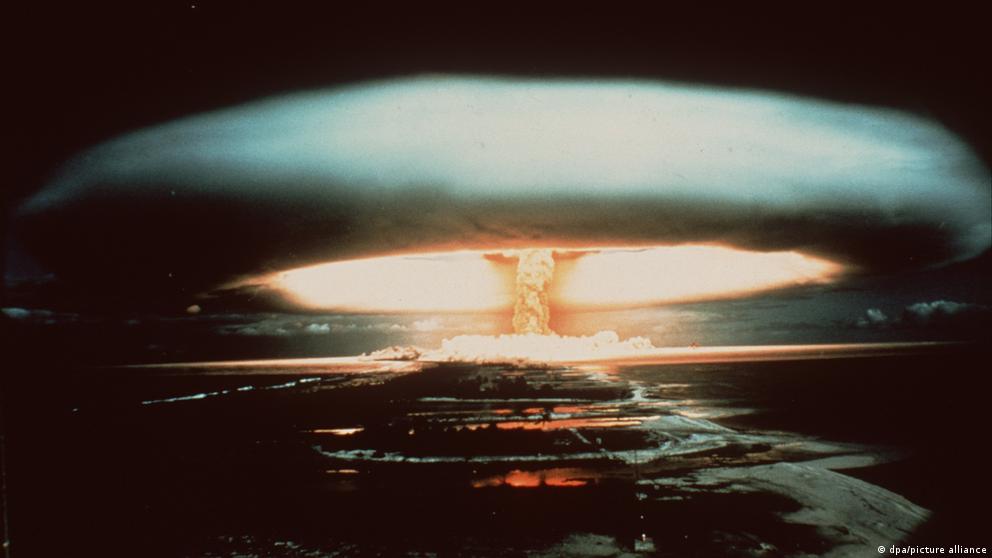 Nuclear arms were a symbol of the Cold War. The recent Russian threats in the war with Ukraine have put them on the map again for many people. How does deterrence work and what kind of protection does Europe have?

When Russian President Vladimir Putin put Russia’s nuclear force on “a special regime of alert” at the start of the Ukraine war, Europe was stunned. In early March, Putin moved on to the next step, sending nuclear-armed Russian submarines and mobile missile units into military exercises. Was he threatening a nuclear attack?

With more than 6,300 warheads, Russia has the world’s largest nuclear arsenal. Within NATO, the United States has the largest nuclear force, with about 5,800 nuclear warheads. France is said to have almost 300 warheads, and the UK allegedly has about 215. Exact figures are not available as the nations in question keep a lot of information under wraps in connection with their nuclear programs.

Notwithstanding the US’s role as nuclear umbrella, European countries could not prevent a nuclear attack with military means. The “umbrella” is based on the assumption that an adversary would not dare to attack NATO countries with nuclear weapons because that aggressor would have to expect a counterattack.

NATO’s nuclear powers pursue different concepts of deterrence. France and Britain rely on a so-called minimum deterrent. They do not assume an exchange of nuclear strikes over several days, they believe the  ability to retaliate or to stop the opponent with a “final warning shot” (France) to be sufficient.

The US, on the other hand, relies on deterrence that includes nuclear weapons with reduced explosive power — US military planners envisage, at least theoretically, the possibility of “limited nuclear war.”

From a legal point of view, almost any use of a nuclear weapon, with the massive impact it has on civilians, violates international humanitarian law. Theoretically, conceivable exceptions include a limited nuclear attack on a warship at sea.

Germany’s contribution to Europe’s nuclear deterrence involves German Air Force Tornado fighter jets stationed at Büchel air base in the state of Rhineland-Palatinate. In an emergency, the jets, with German crews, would fly US nuclear weapons to the target. At least once a year, Bundeswehr pilots train dropping US nuclear bomb dummies.

“The bombs are a relic of a bygone era whose military significance today is minor,” says Peter Rudolf, a political scientist at the German Institute for International and Security Affairs (SWP) in Berlin. In order to use them, however, the enemy’s air defenses would first have to be eliminated, which at the most seems conceivable in a major war.

German Chancellor Olaf Scholz says the German contribution to the nuclear deterrent is not up for discussion, even if the nuclear sharing concept has quite a few critics in the governing coalition. Defense Minister Christine Lambrecht announced on Monday that Germany will replace some of its ageing Tornado bomber jets with US-made F-35 fighter jets capable of carrying nuclear weapons.
Immediately after Russia’s invasion of Ukraine, Scholz had held out the prospect of purchasing those planes.

Still regarded as an important political symbol today, nuclear sharing had far greater significance for Germany during the Cold War than it does today. In the days of the Warsaw Pact, Germany would have been situated at the heart of the battle in the event of an armed conflict with NATO. Nuclear sharing opened up the possibility for the German government in Bonn to exert at least limited influence on the alliance’s nuclear strategy.

Who decides on the use of nuclear arms?

The US president is the first to decide on the use of the US nuclear weapons stored in Germany, Italy, Belgium and the Netherlands. He or she would authorize the release of the bombs, and the country where they are deployed would have to agree to the bombs being dropped by its own fighter jets. Before such a deployment, the other NATO allies would presumably consult in the North Atlantic Council (NAC), NATO’s principal political decision-making body.

The deployment of the French nuclear force is decided solely by the French president, and the British prime minister makes the decision for the UK. The three decision-making centers for nuclear weapons are considered an element of deterrence, as they make it difficult for an opponent to calculate how NATO would react in the event of an attack.

Land-based cruise missile: In theory, Russia has many options for using nuclear arms

Nuclear weapons in the Ukraine war

“First and foremost, the Russian threats have a political function,” says SWP expert Rudolf. “It is a message to the US not to interfere in Ukraine beyond a certain limit.”

Total destruction: Hiroshima after the atomic bomb was dropped on August 6,1945

The Chemical Weapons Convention outlaws the use of chemical weapons internationally. Russia officially destroyed its last chemical warhead nearly five years ago. The US aims to achieve that goal next year. Unlike chemical weapons, which were used even after World War II (most recently in the civil war in Syria), nuclear weapons have not been used since atomic bombs were dropped on Hiroshima and Nagasaki in Japan in World War II.

“There seems to have been a normative threshold since 1945 to use nuclear weapons in conflicts, despite US deliberations in the 1950s and 1960s,” Rudolf says, adding that policymakers have developed a great reluctance where nuclear arms are concerned.

“This is probably due to feelings of moral discomfort, as well as fear of the consequences,” the SWP expert says, arguing that after all, the use of nuclear weapons “could set off a chain that ends in mutual annihilation.”

This article was originally written in German