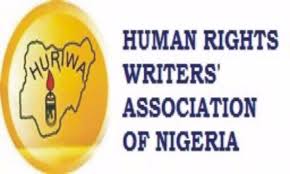 Human Rights Writers Association of Nigeria,(HURIWA) on Thursday, Tackled the Nigerian military over its failure to deploy the 12 Super Tucano fighter jets against terrorists turning the North-West zone into another killing field like the North-East zone.

HURIWA also reminded the Federal Government that these daredevil terrorists are fast approaching the federal Capital Territory and have struck many times very close to the political capital of Nigeria.

HURIWA, in a statement  released by its National Coordinator, Comrade Emmanuel Onwubiko, said the Nigerian military has shown its tolerance for the terrorists by failing to bomb the hideout of the insurgents five months after a Federal High Court designated bandits as terrorists, paving the way for the Nigerian Air Force to bomb the location of the terrorists with the Tucano fighter jets acquired in 2021 from the United States of America.

The group’s comment followed the series of attacks launched by terrorists in Kaduna State in the last one week including the killing of over 50 people in the Giwa Local Government Area of Kaduna on Friday, the invasion of the Kaduna International Airport on Saturday by over 200 terrorists, the bombing of an Abuja-Kaduna train on Monday with over 398 passengers onboard, many killed, hospitalised and several others still unaccounted for and the follow-up attack on Tuesday.
HURIWA also noted that the Kaduna State Governor, Nasir El-Rufai, on Wednesday, indicted the military over its reluctance to deploy the fighter jets when he said the military knew the location of the bandits wreaking havoc in the state but was refusing to bomb their lair.
It said the military had given a series of excuses for its failure to deploy the fighter jets but the Attorney-General of the Federation, Abubakar Malami (SAN), on November 25, 2021, obtained a judgment designating all gunmen in the North-West as terrorists.

The United States Principal Deputy National Security Advisor, Jonathan Finer, had also said the Nigerian Government was expected to deploy the Super Tucano aircraft only in the northern part of the country where Boko Haram insurgents have for over a decade killed thousands and displaced millions.

But the military has, for over five months, refused to deploy the fighter jets while the terrorists shot down a NAF jet, attack the Nigerian Defence Academy, killed over 2,100 innocent lives in Kaduna and kidnapped over 5,000 others within two years.

HURIWA’s Onwubiko said the tardiness of the military was not surprising because of the Fulani ethnic extraction of the terrorists involved in the ruins in the North-West states of Kaduna, Katsina, Kano, Sokoto, Zamfara, Kebbi, and Jigawa.
Onwubiko said, “The cocktails of terrorist attacks including those of Kaduna since Friday and those of Minna and in Suleja near Abuja in which soldiers were killed showed that Nigeria is indeed in a war situation as confessed by el-Rufai.

“Nigerians deserve to know where the Tucano military bombers bought to fight terrorists are and why the government is sparing the terrorists while thousands of so-called repentant terrorists are released regularly by the Borno State governor, Babagana Zulum, and the Federal Government.

If it were to be in the South-East, the military would have killed everyone as it is already doing with the pockets of attacks experienced in the zone which is nothing to be compared to the terrorism experienced on daily basis in the North-West

“The worsening insecurity also matches HURIWA’s earlier prediction that forces within the Federal Government do not want the 2023 election to hold but to activate a state of national emergency for tenure elongation for some months with the hope of scuttling any power transfer of the President of Nigeria to Southern Nigeria.”