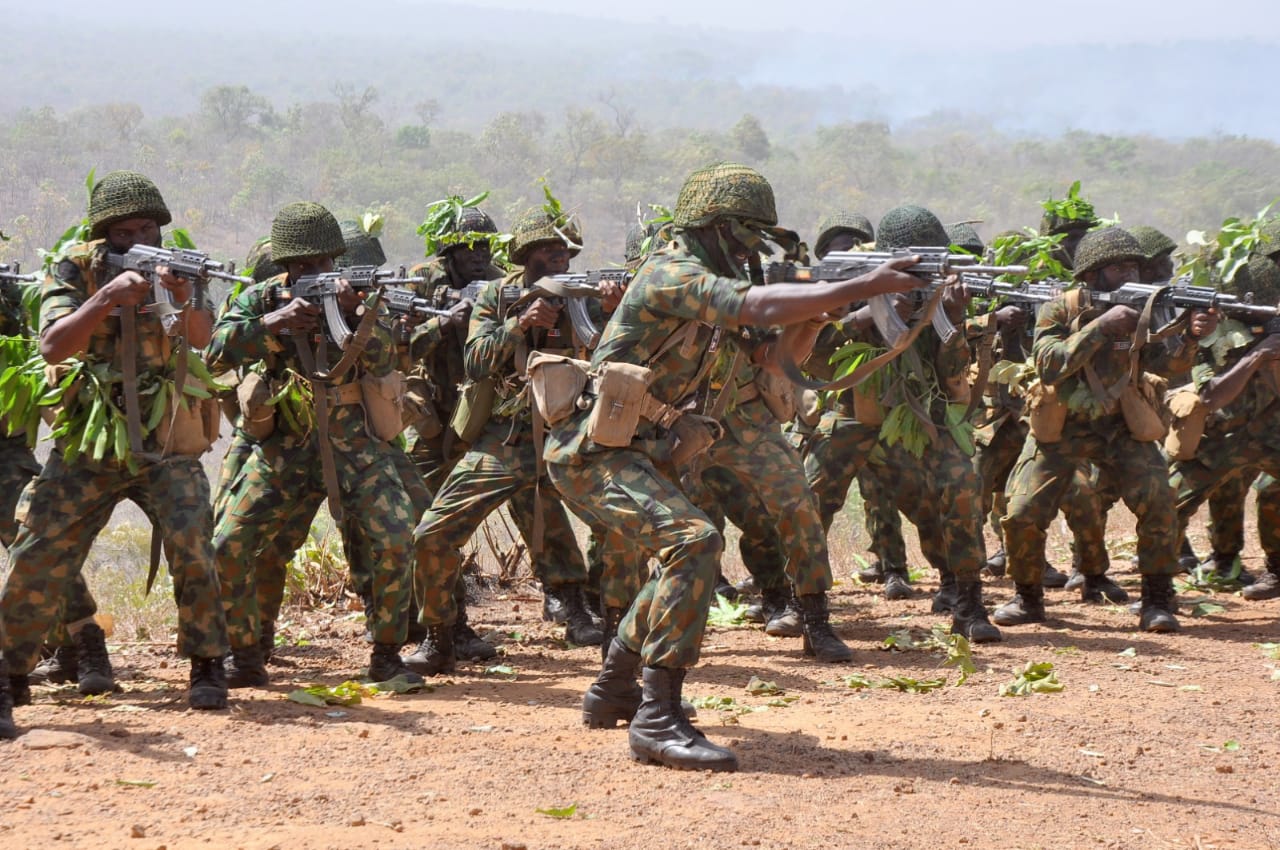 The Commander, Training and Doctrine Command (TRADOC), Nigerian Army, Major General SO Olabanji, has charged cadets of Short Service Course 47 (Army)  to always stay physically and mentally fit for the rigorous task of defending the territorial integrity of the nation and subduing all threats to national security.

Major General Olabanji gave the charge to the cadets at the Nigerian Army Table Hill, Kachia, during the Battle Inoculation and Firepower Demonstration phase of Exercise Camp Highland, conducted for cadets of Short Service Course 47 (Army), which marked the final field exercise for the cadets in the Academy.

The TRADOC Commander, who was the Special Guest of Honour(SGoH) at the event, expressed satisfaction with the performance of the cadets during the exercise. He noted that the exercise which was designed to imbue confidence in them was also aimed at exposing the cadets to real  battle conditions and what they may face in real life battle situations.

Maj Gen Olabanji underscored the importance of physical fitness and positive attitude to work. He also  used the occasion to urge the cadets to remain focused and disciplined in the discharge of all assigned tasks upon their graduation from the Academy. He also thanked the Commandant Nigerian Defence Academy, Major General IM Yusuf, for providing realistic training to the cadets.

The SGoH also used the occasion to thank the Chief of Army Staff, Lieutenant General F Yahaya, for providing quality leadership to the  Nigerian Army.

Highlights of the major training activities during the Exercise CAMP HIGHLAND for Army cadets of Short Service Course 47 include: Map Reading Phase at Hiepang, near Jos, to test the cadets’ practical application of map reading; Adventure and Leadership Training Package at the Citizen and Leadership Training Centre, Shere Hills, Jos; and Tactical Phase, along Katul –Gidan Ali – Kamuru Ikulu Axis in Zangon Kataf Local Government Area of Kaduna State. Important features in the Tactical Phase included practice of new concepts of dismounted advance and reaction to enemy Improvised Explosive Device (IED) attacks, The Forward Operating Base (FOB) concept rather than the conventional deployment for defence, as well as aggressiveness during occupation of Forward Operating Base (patrols and ambushes) were also practiced. The cadets were also trained on combat shooting in conjunction with the usual Field Firing.

In addition to the firing of Rocket Propelled Gun 7 and throwing of Grenade, the cadets passed through series of training during the combat shooting training (including Reactive Shooting, Casualty Evacuation shooting, Night Shooting, Multiple Tactical drills, shooting after Physical Effort and Counter Ambush Drills amongst others).

The battle Inoculation was concluded with a novelty shooting by the Special Guest of Honour, dignitaries from Army Headquarters and invited guests from sister services.