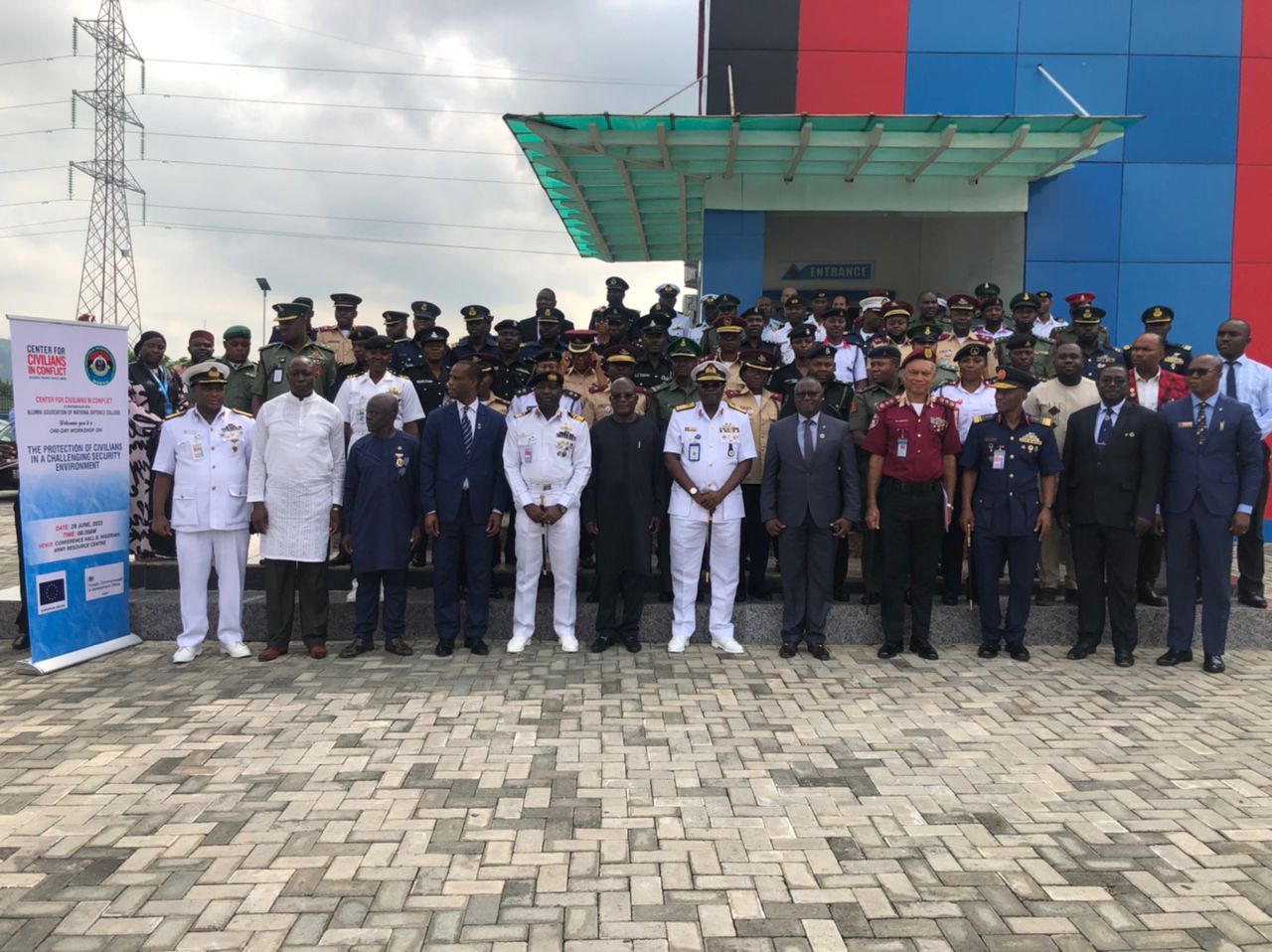 The Nigerian military in collaboration on Tuesday pledged its readiness  to prioritize conflict management and reduce civilian harm in face of insurgency.

The Commandant National Defence College Nigeria Rear Admiral Murtala Bashir, during a workshop on protection of civilians in a challenging environment organized by the Center for Civilians in Conflict (CIVIC)in collaboration with the Alumni Association of the National Defense College (AANDEC), said violence against civilians is an unintended consequence of conflict however he stated that civilians harm perpetrated by security forces will not be tolerated.

“One of the ways to Mitigate civilians harm is this kind of workshop training where we get the middle officers who are in the theatre of operation to sensitize them on their primary responsibility of protecting the civilians.

“We are totally against Human rights abuses by security agencies. The arm forces of Nigeria does not condole such irresponsible act. Any one that does that will not go free,” he warned.

In his remarks, Benson Olugbuo, Country Director, CIVIC stressed that the protection of civilians in security environment is of utmost importance due to prevalence of conflict across the country.


He urged security agencies to keep to their duty of ensuring the protection of lives and properties while mitigating possibilities of civilians harm during security operations.

He said “In cases of unavoidable arm, the military should make it formal by owning up to it and ensuring that it doesn’t happen again and those who were harm should be given the needed support to go back to the former status there were.

“If you don’t have civilians, there is no need for security agencies hence security agents should intentionally ensure they prioritize the protection of civilians,”he added.

Olugbuo noted that the reason for the workshop is to ensure that the military obey the rules of engagement during security operations.

Speaking on Civilians arming themselves against the bandits, he reminds that “the law permits civilians to arm themselves as long as it’s licensed but the problem is where everyone is allowed to have arm and no regulation is a recipe for disaster

“The provisions of the law should still be followed knowing too well that it is the primary responsibility of the state to protect lives and property. If the state has failed, let them tell the citizens so that they can take care of their own security but as long as there’s a security agency, the issue of having gun should be regulated,” he further said.

The Country Director reiterated that it is the primary responsibility of the government to protect lives and properties of the citizens, but said in situations where they are inactive or unable to do that, they should “unregulate” what is currently regulated.

Also speaking, Darlington Abdullahi, President Alumni Association of the National Defence College, called on the civilians to collaborate with the military by sharing credible information and effective communication that would help fight the insurgents.

He said, “The kind of harm civilians faces, need to be minimize that’s why we want to encourage the middle level officers of the military, police and other paramilitary agencies to endavour to protect civilians as much as possible because they look up to the security agencies for protection and if we fail them, they will begin to loose hope in the society.

“Communications between the military and the civilians need to be effective. The civil populist must learn to communicate with security agencies especially in terms of information dissemination. The civil populists must not harm the security agencies by giving the information that is dangerous to the military in terms of revealing Milltary locations to the insurgents,” he concluded.