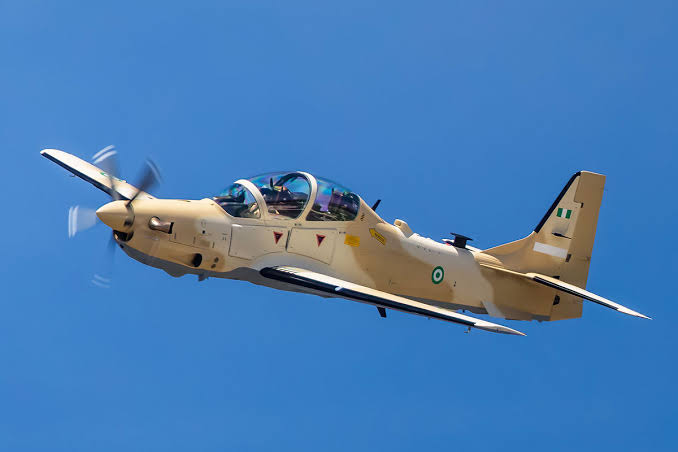 PRNigeria gathered that ISWAP Senior Commander, Mallam Ari in charge of Kirta Wulgo and foreign mercenaries fabricating Improvised Explosive Devise (IED) for the terrorists were killed during the airstrikes by the aircraft.

A senior military intelligence officer said that the airstrikes were authorized after intelligence revealed over 40 terrorists converging at the fringes of Northeast Kirta Wulgo, close to a point where a suspected ISWAP flag was hoisted.

“Some were also seen with weapons around a nearby make-shift structure, which was a likely indication that the structure might have had a high calibre terrorist target.

“After the airstrikes, some of the surviving terrorists were observed making frantic efforts to put out the fire that ensued while others took to their heels.

“Indeed, the make-shift structures were significantly burnt and destroyed at the fringes.”

“Several ISWAP fighters were neutralized in the air strikes including one Mallam Ari who was identified as the Fiya of Kirta Wulgo.”

Fiya is a title held by the second in the hierarchy of the terrorists’ military structure.

When contacted, the NAF spokesperson Air Commodore Edward Gabkwet, confirmed that the NAF indeed carried out some strikes in areas around Kirta Wulgo, but remained silent as the number or identities of the casualties.

ISWAP leadership recently made sweeping changes to their structures due to the loss of some of its key members killed mainly through air strikes by NAF aircraft.