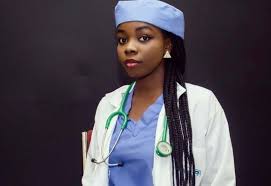 Nigerians have taken to social media to express their displeasure over the terrorist attack on the Abuja-Kaduna train, resulting in the death of an overseas-bound medical doctor, Chinelo Megafu, and several other passengers on board.

Megafu reportedly died from gunshot injuries sustained during the terror attack on the Abuja-Kaduna train late Monday. She had during the attack announced on her Twitter that she was shot and asked for prayers.

She tweeted, “I’m in the train. I have been shot. Please pray for me.”

Terrorists had  on Monday night bombed the Abuja-Kaduna rail tracks and attacked a train filled with over 900 passengers.

Megafu had her secondary education at Queens College, Lagos and went on to graduate with a degree in Dentistry from the University of Port-Harcourt, Rivers State during the academic session of 2015/2016.

She put her knowledge to practice at the St Gerald’s Catholic Hospital in Kaduna under the administration of Reverend Sister Beatrice Danladi, helping patients resolve challenges with dentition.

Until the ill-fated incident on Monday, Megafu had purportedly concluded plans to move to the United Kingdom to continue her medical career.

The faith-based healthcare organisation where she worked still has her name listed as one of the available physicians on its official website on Tuesday.