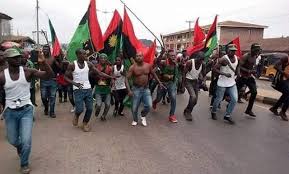 The Indigenous People of Biafra (IPOB) on Saturday, said that there will be no sit- at-home on Wednesday, 19th and Thursday 20th January 2022.

Anxiety, panic buying had rocked the South East region over fears that that IPOB’s order may last up to four days. But a statement by IPOB’s Media and Publicity Secretary, Emma Powerful, entitled confirmed that “There will be no sit-at-home, in Biafra land on January Wednesday 19th and Thursday 20th, 2022,” he said.

“Anybody issuing order for sit-at-home on 19th and 20th of January is not a member of IPOB and such persons are working against the interest of its leader and the entire struggle for independence and should therefore, be disregarded,” the statement added

The pro-Biafra group however stated that there will be sit-at-home only on Tuesday, 18th January because it does not want to compound the pains of tge the people, hence, they limited the sit-at-home to only Tuesday January 18, 2022.

IPOB however stated emphatically that sit-at-home will only be observed on Tuesday 18th January the first day its leader Mazi Nnamdi Kanu will appear in court this new year.

IPOB added that that Wednesday 19th January, 2022 is the judgment day in the suit by its leader against the Federal Government, which is pending before an Umuahia High Court and because of that there will be no sit-at-home on that day.