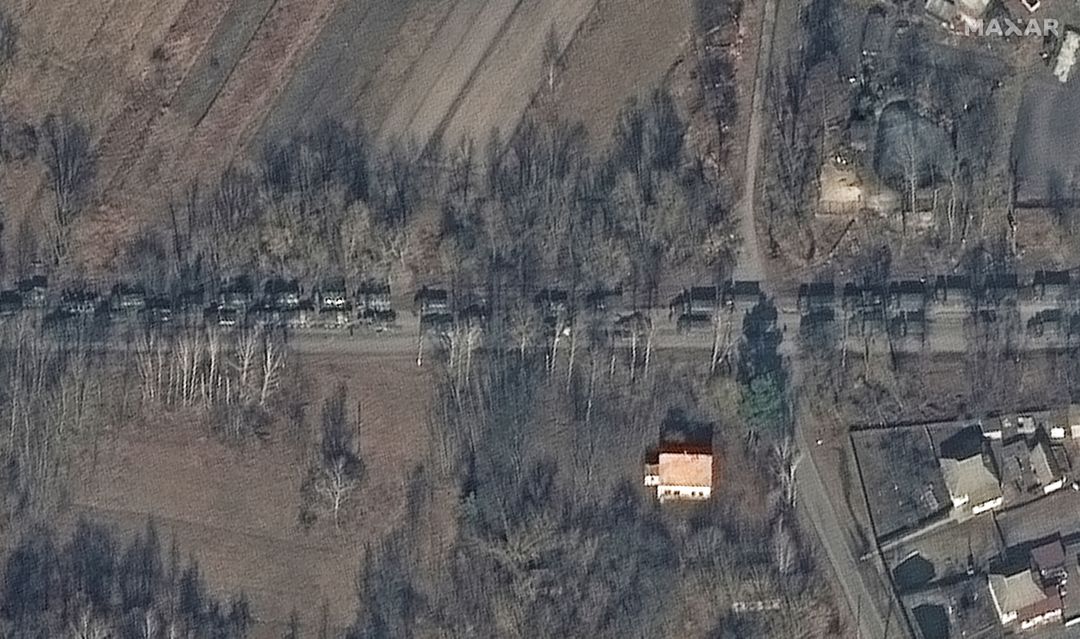 •Experts explaon the likely outcome of Russian offensive in Ukraine

As Russia’s armed forces conduct an attack designed to cripple Ukraine’s military, delegations from Moscow and Kiev have held two rounds of high-stakes peace talks in Belarus. RT got in contact with Russian experts about when and how the so called “special operation” is likely to draw to a close, what this could mean for Ukraine’s sovereignty, and what lessons can be learned in relation to information warfare.

Russia’s Permanent Representative to the UN Vasily Nebenzya has insisted that, through the invasion of Ukraine, Moscow is exercising its right to defend itself from a neighboring country that is seeking to acquire an arsenal of nuclear weapons. Speaking at the Munich Security Conference last month, Ukrainian President Volodymyr Zelensky touched on Kiev’s decision to hand over its atomic armaments under the Budapest Memorandum, inked in 1994, in exchange for security guarantees.

Some observers interpreted this as the former Soviet Republic looking to renounce its non-nuclear status.

“As soon as there is an understanding that the Ukrainian authorities are willing to start the demilitarization and denazification process, it’ll be a step towards wrapping up the operation,” Nebenzya claimed.

The Head of the Center for Comprehensive European and International Studies at the Higher School of Economics (HSE), Vasily Kashin, explained to RT that analysis of the military intervention in Ukraine should be based on President Vladimir Putin’s statements.

“We have limited understanding of Russia’s goals here. It seems that we’re talking about moving through all of Ukraine’s territory and changing its political system. I suppose the point is to make Ukraine into something it would’ve become had it been observing the Minsk Agreements – a country with a weak center and strong regions. That would make it impossible for Ukraine to single-mindedly pursue a bloc-oriented foreign policy. Moreover, the nationalists would be cut off from politics. How exactly Russia intends to achieve that is still unclear to me, considering Ukraine is a big country and the Russian forces are limited,” he said.

A Russian armored vehicle is pictured near the Ukrainian border. © Sputnik / Konstantin Mikhalchevsky

Moscow has repeatedly insisted that it has no intentions of occupying Ukraine, but is working to demilitarize Ukrainian territory. Commenting on what sort of timescale could be expected to achieve this objective, Kashin referred to the US military’s 2003 Operation Iraqi Freedom, which lasted for 21 days.

“It’s likely that Kiev will be first surrounded and then taken, but I don’t think it will be that soon, since the locals were given weapons there. Russia is mostly focused on other parts of the country now. In a week or two, Ukraine’s organized defense will probably crumble, and then there will be the issue of bringing the country under control and establishing a new regime,” the HSE expert claimed.

Valdai Discussion Club program director Oleg Barabanov told RT he believes that the outcome of the intervention in Ukraine will depend on how successful the Russian military operation is, specifically whether or not Kiev’s forces and militia will halt their armed resistance.

“If the operation is going well in the next couple of days and military objectives are achieved, Ukraine will have no choice but to start discussing Russia’s demands on demilitarization. But if the operation starts stalling, the shock of the first few days will dissipate, and Ukraine will be able to shore up its defense. Then this will turn into a prolonged military conflict where negotiations won’t play a decisive role,” he said.

The Ukrainian leadership is doing everything in its power to make Russia’s advance through the country “as costly as possible,” Kashin claims.

“Handing out guns to untrained civilians outside the army structure doesn’t make much sense defense-wise. But they will get killed if they try to resist and every such death will lead to several dozen more people getting involved in anti-Russian activities – every person killed has loved ones and friends, after all. This is the reasoning behind the unrelenting defense of Kiev instead of retreating west and holding the line at the border there.”

According to him, “it is a mass sacrifice meant to complicate the situation for Russia and make it hard for it to achieve its goals.” He went as far to claim that “Kiev doesn’t care about its people.”

Barabanov argues that Moscow should have carried out a similar operation in 2014 in the wake of the Maidan, when violent street protests ousted the elected government. The Donetsk and Lugansk People’s Republic’s (DPR and LPR) subsequently declared their independence from Kiev, which the Kremlin has recently recognized.

“Russian troops try to avoid entering Ukrainian cities, encircling and blocking them instead. It may be right from the tactical standpoint. But the question is whether Zelensky’s government will remain in power by the end of it or some new alternative center of power will emerge. Zelensky and his circle won’t back down that easily, judging by how valiant and organized they are now. This is the key difference from 2014. Back then, the elites and the army were likely to flee, so an eight-year-long delay is a big mistake. I would say there is no chance of Zelensky running away. Even if his actions are contradictory sometimes, he’s doing everything he can,” Barabanov said.

On February 28, Russia and Ukraine had their first round of talks in the Gomel region of Belarus. According to the head of the Russian delegation, Vladimir Medinsky, the two parties discussed a wide range of issues during the five-hour summit.

However, some analysts speculate that any negotiations with the current Ukrainian leadership could be redundant, since the nation might soon be governed by different officials.

Barabanov believes, a new ‘Novorussian’ people’s republic, with a capital situated near Kherson in the south, or Kharkov in the east, could be an alternative to the incumbent Kiev government. He also noted that there’s been much speculation in the media that a potential new state could be headed by former Novorossiya parliament speaker and Verkhovna Rada member, Oleg Tsaryov, or the former Ukrainian prime minister, Nikolay Azarov.

“In this case, they can even negotiate with Russia, practically dividing Ukraine. I don’t believe there’s a chance somebody could just oust Zelensky, despite Putin’s calls to the military to seize power. I see it as the least likely scenario,” the expert said.

According to Kashin, there are some allegedly Russian-controlled anti-fascist organizations in Ukraine that could theoretically be involved in running the country.

“This is a very peculiar idea of Ukraine’s future,” Kashin said.

The HSE expert alleges that Tsaryov could be taking part in developments from behind the scenes. He also pointed out that MP Ilya Kiva has been very vocal over the past few days, criticizing both Zelensky and Kiev Mayor Vitaly Klitschko.

Kiva was once in charge of the Poltava branch of the Right Sector, an ultra-right Ukrainian organization. He previously supported the Ukrainization of the Donbass and worked as an adviser to former minister of internal affairs Arsen Avakov. In 2014-2015, he participated in the so-called anti-terrorist operation in DPR and LPR from the Ukrainian side.

In recent years, Ukrainian nationalists began to condemn Kiva for his political U-turn. He joined the ranks of the allegedly pro-Russian Opposition Platform – For Life – the political party headed by Viktor Medvedchuk, who is currently under house-arrest. In an interview in 2021, Kiva said that “for me, Russia is a chance to save the future of my country,” while “the US is sowing seeds of Nazism in Ukraine.”

Barabanov claims that the Russian media may have kept a lower profile in its coverage of the war based on the need to keep tactical plans secret over the course of the attack.

“However, the Ukrainian leadership and talking heads have been working hard to keep up the morale, regularly thanking their troops for their heroism and for defending their homeland. We don’t see enough of that in Russia, except that one time President Putin thanked them. When it comes to boosting morale, the Ukrainian propaganda machine trumps the Kremlin one,” he said.

Kashin also asserts that Russian press is not adequately covering the offensive, but he stopped short of declaring Ukraine as the winner on the media campaign.

“Russia should be showing not only more videos, but also various interviews. What we’ve seen so far are mostly strange statements. But Ukraine is not handling it all that well either. Perhaps it’s because their propaganda infrastructure was hit at the very beginning of the operation. The statements coming from Ukraine now are chaotic and unconfirmed,” he said.

A lack of what Kashin believes to be official information coming from Moscow, has contributed to the controversial reaction many are observing within the country, according to the expert.

“Russia should’ve prepared detailed reference materials that would be widely available and contain all the information about how the talks broke down, who was responsible, and who and how made the decision to launch the current military operation. Most importantly, there should be a clear explanation about why Ukraine is so important to Russia that we started the biggest war in Europe since 1945 over it.”

Despite the advances of Moscow’s armed forces on the ground, Russian society does not receive enough insight on how the war is going, Kashin claims, adding that it will take time to fully grasp just how successful the operation is going.