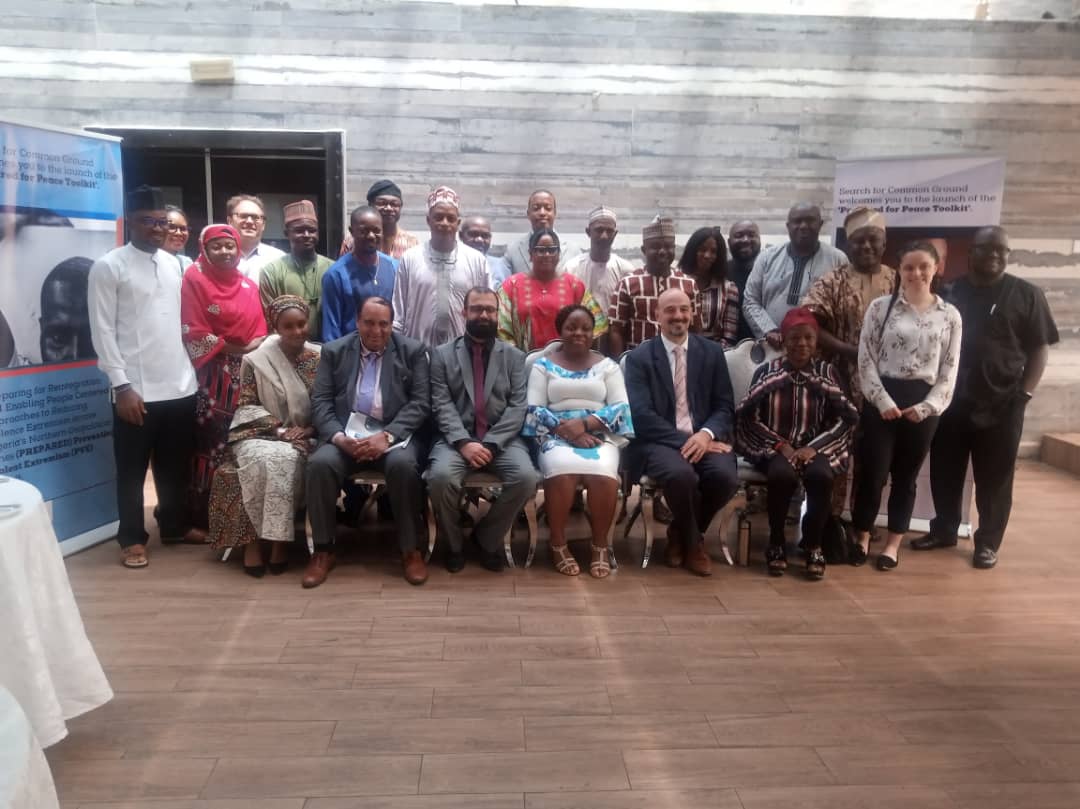 Search for Common Ground, a peacebuilding Non Governmental Organisation has launched a booklet titled ”Prepare for Peace” in its bid to proffer lasting solutions to cases of violent extremism, noting that there is an increase in violence globally.

The Country Director Sher Ali Nawaz, during the launching ceremony in Abuja described the toolkit as a practitioner guide, and reference point in terms of project development, stating that there is a complex and worst conflict in Nigeria.

”If we do not have such an objective overview newcomers to this context will fall victim to misleading and misrepresenting information.This helps to reinvent the need and know what exists and learn from the lessons so as not to make the same mistakes again.

“This avoids duplication of effort and resources. Also helps to avoid a situation where all of us are doing the same thing at the same place.

”The tool kit talks about seven modules.Among which is conflict transformation,this is going one step forward in conflict resolution,as peacebuilders we are trained to look at the positive side of things, we believe that conflict setting can be transformed beyond resolving it.

”At the end of trying all these modules, you have to economically, socially reintegrate them into the society,” he assured.

Also speaking, the President and Chief Executive Officer (CEO) SfCG, Shamil Idriss, stressed the need for a security approach that evolves, noting that there is currently a lack of coordination and preventive approach to tackling violent extremism in Nigeria, especially in the north.

Idriss faulted the old-fashioned way of humanitarian organisation handling crises by giving relief materials with yearly repetition, assuring that with the module builds the resilience of the community on how to address conflicts.

”The module builds resilience in case if next time disaster strikes. If people have the knowledge skills conflict will not banish them. This is not always the most practical way to end a conflict,” he said.

”Not only in Nigeria but globally, what we have seen in the past ten years have been the funding for the humanitarian needs exploding, and the gap between what is needed and what is provided is less. The result of this is to prevent this crisis in the first place. The primary cause of poverty today is violent problems.

Earlier, the Counselor Public affairs, at the US Embassy in Nigeria, Adnan Siddiqi, stressed the importance of promoting dialogues and ideas between Nigeria and the United States, saying the toolkit is timely and a workable document for every community.

Similarly, the West Africa Regional Manager at SCG, and Co- reviewer Bryan Weiner, noted that one Of the biggest complains of reintegration encountered in the course if working on the project is that no matter what horrendous crime committed, you are forgiven and put back in to the community, saying this speaks of severe level of injustice on the community members.

”These terrorists need to go through some form of justice system before reintegration. There is also the need to build resilience to prevent return to violence as well as try to look at the root cause, why the insurgency is reoccuring,” he said.

”There have been a lot of warning signs in the North West states: Kaduna, Sokoto, this could be a much bigger problem than it is now if not checked could lead to a much worse situation. Prosecution is the part of accountability that needs to happen, we cannot round up everyone involved in violent groups and lock them up.

”What are the risks, because if you do not know what they are, you may not know how to manage them. At the beginning of the problems with Boko Haram they did not realise it was going to escalate to this level until it happened, that is the reason for a detailed analysis of risk management,” he said.

While reviewing the toolkit, the programme associate SCG Gift Omoniwa, said it is action oriented and a cross sectional tool kit, assuring that it will enable theoretical and practical solutions especially as it is filled with a critical gap in Nigeria for engagement.

”This showcases what actors and practitioners are doing. As it is from shared ideas of numerous persons. So apart from learning from the perspective that have been deployed there is a chance to learn from the beneficiary.” she said.