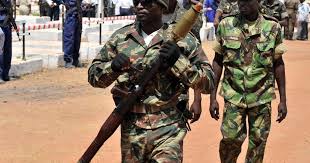 Soldiers have attempted to overthrow the government of Guinea-Bissau, according to regional bloc Ecowas, a week after Burkina Faso’s president was ousted amid a surge in putsches across West Africa.

Heavy gunfire erupted on Tuesday in the capital Bissau near the Government Palace, where president Umaro Sissoco Embaló was presiding over a cabinet meeting, according to news agencies. The attempt follows a spike in coups across the region: soldiers in Mali, Guinea, Chad and Burkina Faso have seized power amid rising insecurity and economic malaise.

“The ‘coup’ virus is now airborne across the subregion,” W. Gyude Moore, former Liberian public works minister and senior policy fellow at the Washington-based Centre for Global Development, wrote on Twitter. Unconfirmed videos on social media showed heavy fire in Bissau on Tuesday afternoon, but the whereabouts of Embaló were not yet clear by the evening.

The Economic Community of West African States condemned what it referred to as an “attempted coup”. In a statement, the 15-member regional bloc said: “Ecowas asks the military to return to their barracks and maintain a republican posture.”

The group issued a nearly identical statement last Sunday, when gunfire erupted in Burkina Faso’s capital Ouagadougou. The next day, soldiers announced on state TV that they had overthrown president Roch Kaboré, suspended the constitution and dissolved the government — this week, coup leader Lieutenant Colonel Paul-Henri Sandaogo Damiba was named interim president and head of the armed forces.

A spokesman for UN Secretary-General António Guterres said in a statement that he was “deeply concerned with the news of heavy fighting in Bissau. He asks for an immediate end to the fighting and for full respect of the country’s democratic institutions”.

The move follows a pattern set by Mali’s Colonel Assimi Goïta, who led the overthrow of the democratically elected government in August 2020 and fully seized power in May 2021, naming himself interim president.

Ecowas has repeatedly condemned the coups among its members, suspending and sanctioning those countries where governments have fallen. But Moore said the bloc was “overwhelmed”: “It doesn’t have the bandwidth to handle so many crises, in the midst of a pandemic, while every member faces huge domestic issues.”