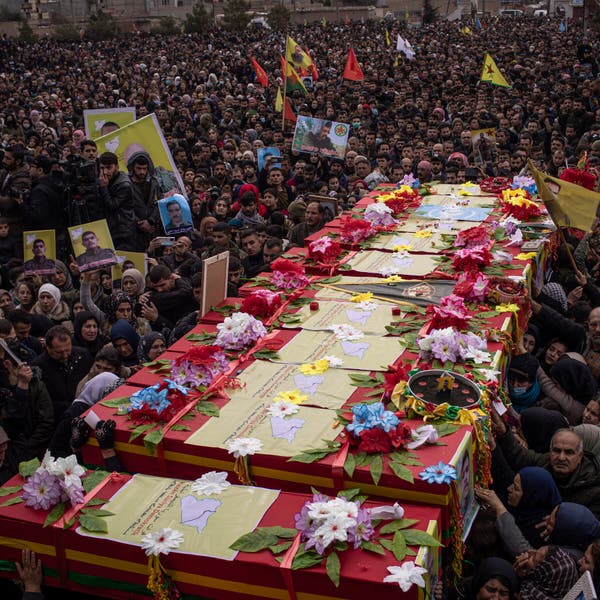 •The Kurds of northeastern Syria dreamed of establishing an autonomous, multiethnic and gender-equal utopia. Instead, their breakaway region has been engulfed in conflict since its creation.

QAMISHLI, Syria — Suad Shukri arrived early one morning last week to visit her son’s grave. An hour later, the small cemetery would be thronged by thousands of mourners burying 12 fighters from a Kurdish-led force who were killed battling the recent Islamic State attack on a prison in northeast Syria.

But for the moment, she had the place — its hundreds of graves adorned with plastic flowers — almost to herself. Her son, Eli Sher, was also killed fighting ISIS, but that was six years ago near the Syrian city of Raqqa. He had joined a Kurdish militia when he was 13 and by the time he died at 16, he was already a veteran fighter.

“This is our life,” Ms. Shukri said of this vulnerable corner of the Middle East.

Not long after the start of Syria’s civil war 10 years ago, the Kurdish minority that dominates the country’s northeast set up an autonomous region as an experiment in multiethnic, gender-equal self-rule. But ever since, the Kurds have been engulfed in a seemingly endless war, subject to the whims of their more powerful neighbors, most notably the regime of President Bashar al-Assad in Damascus and Turkey to the north.

The latest threat is a familiar one — the Islamic State.

The terrorist group reared its head again recently, three years after the main military power in this region, the Kurdish-led Syrian Democratic Forces or S.D.F., drove the militants from the last patch of their self-declared caliphate in Syria and Iraq with the help of a U.S.-led military coalition.

On Jan. 20, Islamic State suicide bombers and gunmen attacked a prison in the city of Hasaka in an attempt to free some 4,000 suspected ISIS fighters held there. The city is part of the autonomous region, and the S.D.F., backed by U.S. military might, fought for almost two weeks before it regained control.

The attack was viewed as a sign of an ISIS resurgence in the area. But days after it was put down, the U.S. staged a daring commando raid on another part of northern Syria that ended in the death of the Islamic State leader, Abu Ibrahim al-Hashimi al-Qurayshi.

President Biden, in announcing the successful operation, singled out the S.D.F. for praise, calling the force “essential partners,” without saying whether they had played a role in the raid.

Still, despite a close military partnership with the United States that has lasted for years, the Syrian Kurds face a precarious future.

The autonomous region, encompassing roughly the third of Syria east of the Euphrates River, was created in 2012, breaking away from Syrian government control after the start of an uprising against Mr. Assad’s authoritarian rule the previous year. In one of the most complicated battlefields in the world, U.S. forces share space in the region with Russian troops allied with the Assad government, allowed in by the S.D.F. as protection against a Turkish incursion.

The Aftermath of Syria’s Civil War

After a decade of fighting, many Syrians wonder if the country can be put back together.

In this uneasy coexistence, major cities in the region are split between Syrian government control and local control. Residents who study or work in the government-controlled territory line up at a checkpoints, waiting to be allowed through. But many are too afraid of arrest to venture there.

The Kurds call the region Rojava, which means “the West.” It is an allusion to western Kurdistan and a longstanding but seemingly unattainable dream of an independent state that would stretch over the Kurdish areas of Syria, Iraq, Iran and Turkey.

All those countries have historically oppressed their Kurdish populations, and the more than 25 million Kurds who live in them are considered the world’s largest ethnic group without a state. In Syria, they account for up to 10 percent of the population of 18 million.

At least 55 percent of the roughly 4.6 million people live in the autonomous region are Kurds, according to the regional administration. But there are also large numbers of Arabs and Assyrian Christians, along with smaller populations of Turkmen, Armenian, Circassian and Yazidi minorities.

“In Syria and Iraq, there were sectarian wars,” said Abdul Karim Omar, the head of the Kurdish region’s international relations department. Within his own region, he said, “we have maintained social peace and coexistence.”

The regional administration relies on a network of multiethnic, multireligious councils. Each major committee is headed by both a woman and a man. Women play a prominent role as fighters, including on the front lines.

While some are not as strong in reality as on paper, those steps to ensure diversity and gender equality are a far cry from most countries in the Middle East.

Still in its short life, the Kurdish-led region has faced persistent security and economic threats from almost all sides, including from the Syrian government and Iraqi Kurdish neighbors to the east. But it is Turkey that looms the largest.

Outside the office building where Mr. Omar tries to craft policy for a region that has political autonomy but is not recognized by any government, the lights of the Turkish city of Nusaibeen twinkle across a high wall a few hundred yards away.

Turkey, which has battled Kurdish militants at home for decades, invaded areas held by the Syrian Kurdish-led forces to push them back from the border. Turkey considers the S.D.F. a security threat because of its links to a Kurdish guerrilla movement that has been fighting an insurgency against the Turkish state for decades.

The operation was endorsed by President Donald J. Trump, who withdrew U.S. forces from some Kurdish-led areas after a phone call with the Turkish president. This allowed Turkey’s Syrian proxies to move in.

The Iraqi Kurds have close economic ties with Turkey, and last month the dominant Kurdish party in Iraq closed the Iraqi Kurdistan region’s border with the Kurdish-led region in Syria. That left shops on the Syrian side empty of sugar and other staples.

On a recent day, long lines of people shivering in the winter cold waited with jerrycans to buy kerosene outside fuel stations. At checkpoints, choking plumes of black smoke rise from burning tires set alight by security forces to keep warm.

Mazlum Kobani, the head of the region’s security forces, blamed Turkish pressure for the Iraqis’ closure of the border, which included stopping exports of oil sold by the Kurdish-led region in Syria to Iraqi Kurds — a main source of revenue.

“We are both Kurds,” Mr. Kobani said of his Iraqi Kurdish neighbors, “and we must help each other out. But they have interests with Turkey.” The security chief, who is on Turkey’s most-wanted list, spoke from a base he shares with U.S. forces. He chose the location to deter Turkey from launching a drone strike to kill him.