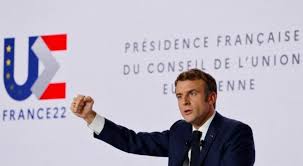 As Europeans wait with bated breath to see whether Russian President Vladimir Putin authorizes an invasion of Ukraine, another military conflict is causing apprehension in Paris and Brussels, this one in Mali.

Tensions between Paris and the military junta currently running the West African country have been simmering for months. But they reached a boil this week, when the junta expelled the French ambassador to Bamako. Paris now says it will consult with its European partners engaged in the European Union’s Takuba Task Force, which was launched by Brussels to compensate for the gradual drawdown of French troops from its Operation Barkhane mission in the Sahel region. Together they will decide by mid-February whether the EU mission should continue.

To get a better sense of what the potential termination of the Takuba mission means not just for France but for the EU more broadly, we have to go back to March 2020. That’s when France, after years of applying considerable pressure, finally succeeded in convincing its EU partners to join Paris’ counterterrorism mission fighting Islamist militants in the Sahel region of West Africa, which consists mostly of countries that were former French colonies. Former French President Francois Hollande had deepened France’s involvement in regional stabilization missions , including a yearlong military intervention in Mali beginning in 2013. His successor, Emmanuel Macron, has sought to “Europeanize” these missions, in order to reduce the burden on the French military but also to demonstrate European strategic autonomy in action. Macron has long argued that such European-led missions outside the context of NATO can and should effectively respond to the EU’s security priorities.

Though the EU has launched stabilization missions in Africa in the past, Takuba is the most ambitious one in years, deploying military trainers and advisers from several EU countries—including Germany, Italy and the Czech Republic—to assist Malian troops in their fight against Islamist terror groups and complement France’s Operation Barkhane. But Takuba had only been operational for a few months before the Malian military staged a coup that overthrew former President Ibrahim Boubacar Keita in August 2020. The interim junta has since refused to hold elections it pledged to schedule to replace the transitional government installed after the coup. The EU laid the groundwork for sanctions against the junta in December. At the same time it applied sanctions against the Russian private military contractor Wagner Group , with which Bamako reportedly signed a cooperation agreement and which has reportedly deployed to the country. Three officials from Mali’s ruling junta are likely to be added today to a list of sanctioned individuals in Bamako.

Following Brussels’ condemnation of Bamako in December, the interim junta declared that it wanted European troops out of Mali. But France insists they are legally authorized to be there for the peacekeeping mission that Bamako agreed to. Doubts over the future of the mission started to grow last week, when Mali’s junta told Denmark to withdraw its troops; Copenhagen dutifully obliged, over French protests. The question now remains whether the other European partner countries scheduled to send troops to the Sahel, such as Portugal, Hungary and Romania, will follow through with or cancel their deployments.

Austria currently exercises military command of Takuba, and Defense Minister Klaudia Tanner told Politico this week that European commitment to the mission already showed signs of wavering at the most recent EU defense ministers’ meeting held last month in Brest, France. “As some of my colleagues also pointed out, we need to make sure that our training mission does not end up training soldiers that fall under the command of Wagner,” she said. “It’s not acceptable that the EU carries out training missions for soldiers which are then commanded by Wagner.”

The EU now stands in an unenviable situation. A complete withdrawal of the mission could create a power vacuum that Russia might fill. But an indefinite European deployment in Mali that overlaps with Wagner’s presence on the ground could mean inadvertently providing support to Russian paramilitary forces.

The mission’s symbolic importance as one of the few recent examples of non-NATO European military cooperation looms large over the decision on what to do next. A retreat from the Sahel would represent a humiliating blow for Macron’s vision of European strategic autonomy , free from Washington’s hegemony, one of his preoccupations and a major theme of France’s current presidency of the Council of the EU. But with the Malian junta demanding that the Europeans leave, they may not have much of a choice.