Terrorists may not allow 2023 elections to hold- Falae 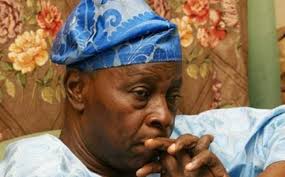 A former Secretary to the Government of the Federation, Chief Olu Falae, said terrorists might not allow the 2023 general elections to hold if the situation did not improve before the election period

Falae, expressed concerns that even if the elections holds, the results night not be credible because the polls night be marred by violence.

Speaking to journalists on Monday in Akure, Ondo state, the former Minister of Finance said, “I pray that terrorists will allow the election to take place. Some few days ago they burnt down the INEC office somewhere in the South-East. They have been doing that for a long time, so we hope the election will even be possible.

“If elections take place at all, I hope that the outcome will be acceptable and credible because, if during voting, shooting takes place, the outcome may not be credible. So, all in all, I am hoping that we will be able to have elections that will be credible and I am praying that in that case the Lord Almighty will intervene and pick a government that can lead Nigeria out of the crisis in which we are. Nigeria is tottering precariously on the edge of the precipe.”

Supporting the call for creation of  State Police, he said there was a need for every community to police themselves.

Speaking on the buildup to the 2023 polls, Falae said the elections might go on ethnic lines based on the way Nigerians had been campaigning ahead of the 2023 election.

The elder statesman said ethnic agenda was ongoing because the current Nigerian had not made any impact on lives of individuals, alleging that the present administration in the country had failed to present itself as the government of the people.

He said the major factor Nigerians should consider in choosing their next president is competence rather than ethnic or religious factor.

He said, “This (ethnic agenda) is inevitable when you have a government that does not present itself as the government of the people. If a government presents itself to be a champion of a section of the people, naturally the other elements in the country will defend themselves and will have to take care of themselves.

“My view might sound simplistic that Nigeria is not a difficult country to govern, because I have spent time in government, if we have a government or President who shows genuinely that he is for all Nigerians and shows that he cared for all Nigerians, they will worship him.”