The future of democracy is… Nigeria 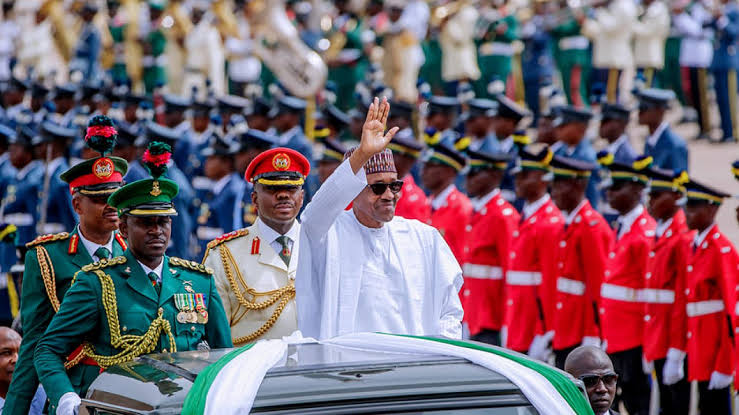 President Muhammadu Buhari on his inauguration

The threat to democracy is not limited to the African continent, most recently we have seen it spectacularly combust in the United States, under siege from right-wing extremism personified in the shape of a former president and the Republican party. Together this unholy alliance attempted that very “Third World” power play of staging a coup on January 6, 2021. Yet, the headlines are made in West Africa and thundered around the world as if these actions do not come from somewhere. As the Americans ought to know revolution happens when a system is unjust, and change is required. This is not to say that what was witnessed on January 6 was correct or justified, it was not, simply because there was no fraud as perpetuated by the Big Lie of the former president and his lackeys. So, what is going on in West Africa?

In the last six months alone, West Africa has witnessed a resurgence of coups, Burkina Faso being the latest. Like the previous coups in Mali and Guinea, these former French colonial territories are battling Islamist insurgents. However, for these Francophone countries they also see the continued imperialist imposition and dudress of France as an exorcism that needs to happen. The draining of their coffers to Paris and the propping up of strong men as democratically elected governments extend the poverty and underdevelopment of their society, human capital, so they decided to rail against it.
French influence in the region has made development stagnant and difficult as patronage to serve France instead of serving the best interest of the people bred corruption. Business and political interest is so strong that local political leadership abandon their energies in trying to reorientate the relationship succumbing to the will of France and its right of first refusal on all national resources and privileged access to government contracts. Democracy, as practised and supported by France, has not benefited the people of the region because it is still at the end of a French leash, making independence incomplete.

Burkina Faso and Mali are bogged down by a Jihadist threat so serious, even with French military assistance the ousted governments failed to address it convincingly. Disastrous governance propelled the crisis, armed groups kill and maim, internally displacing millions of citizens due to conflict and poverty. The new Burkinabe military leadership directly claimed their actions was a result of increased terrorist attacks, no doubt launched from ungoverned spaces. The fall of Libya and the failed Arab Spring resulted in the migration of terror groups south to Niger, Tchad, and Mali has seen parts of these countries ultimately occupied by Al Qaida and Daesh. The danger is across all West African borders and of course no one knows this better than Nigeria.

The region has seen constitutional multi party civilian politics thrive for more than two decades, and this has been supported and championed by the regional bloc ECOWAS. The coup leaders have been penalised with sanctions imposed by the bloc including travel restrictions, freezing of accounts and border closures restricting regional trade. This effort is of course being spearheaded by the regional hegemon Nigeria; itself in the throes of battling its own demons as well as a decade old Islamist insurgency. The Nigerian Vice President has been tasked with leading the condemnations and garnering support from international bodies like the United Nations, European Union, and other regional groups. For its part, the Nigerian House of Representatives has warned of the resurgence of military coups in West Africa and has taken steps to further impose sanctions and condemnation for the undemocratic acts against governments voted in by the peoples of those countries. Nigeria is bracing and proofing itself to stand as a bastion and champion of democracy in the region for fear of a domino effect.

Political commentators and critics may be reading this in some disbelief, given that Nigeria is without compare when it comes to executing coups and most of all what a seemingly disorientated mess it appears to be in. The country has had to deal with the birth pangs and challenges of a bourgeoning democracy since 1999, we made history in 2015 when for the first time an incumbent president was defeated and gave way gracefully. That act alone gave hope and energy to our democracy, we may not be the best at administering right now but Nigeria has the institutions and human capital to make it work. Although the issue of the 1999 constitution begs the question if we are practicing true federalism? Nigeria has a method to its madness, we push to the precipice and then redraw that line to save ourselves from falling into the abyss, again that time has come.

Unlike our neighbours in the region or the United States, we are not at liberty to throw our democracy into crisis. The thought of the US being compared to an African country in terms of democracy until now was ‘haram’ but we have since seen the veneer of American democracy ripped to shreds. Its true nature of being unequal and bias to a white Christian demographic is an element of the way its flawed constitution was written, subsequently interpreted, and usurped by that same segment. American politics is afflicted by extreme capitalism, a direct result of plantation capitalism the original founding sin of America that still pervades its socioeconomic environment. Lest we forget, the numerous coups supported by the Americans in Africa and their penchant for the African strongman for so long revered and admired; an eventual drain and control of Africa and her resources, another form of plantation capitalism, expertly practised by France.

Nigeria with its different parts knows that to survive all its six geopolitical zones must sing the same tune. Granted some may be out of tune but at least we sing from the same hymn sheet. In the US this is not the case, as for Burkina, Guinea, Mali, and the other Francophone countries their song remains one of independence, something Nigeria has politically and is swimming hard to achieve economically, the danger is preserving our democracy while not selling out to extreme capitalism.

As the country enters the election cycle it cannot forget the senseless violence and killings that made the headlines daily, yet we continue to live with an Islamist insurgency, secessionists threats, high inflation, COVID-19 and the pressures of numerous difficulties including our special breed of politicians. Our politics at grass roots level continues to evolve albeit at a frightening snail’s pace, but there is ownership and growing inclusion. There was a point when Pan Africanism as birthed in West Africa led the way as the ideology across the African continent and the black world, a third way that was broad and inclusive, a grassroots and governmental objective for collective self reliance. Nigeria showed the way by fighting for the freedom of others like South Africa and Zimbabwe. A Time article authored by William E. Smith described us as “The light that failed”, it was written in the success of the putsch of 1983, in it he says Nigeria was a “most promising democracy”, it ends with the start of a story Nigerians of a certain age know.

Since the article was published Nigeria endured two more military interjections before we regained our democratic garb. We cannot be that failed light again, our place in West Africa demands we stand up and be an example, what better way to redeem ourselves in the eyes of the world. Nigerians, for better or worse, have chosen to believe in the democratic experiment because this a country where adversity is a normal step in life, but it is one we believe we can and must overcome.

2023: Go beyond getting your voters card, EU urges Nigerian youths

One thought on “The future of democracy is… Nigeria”