The West is sleepwalking into war in Ukraine 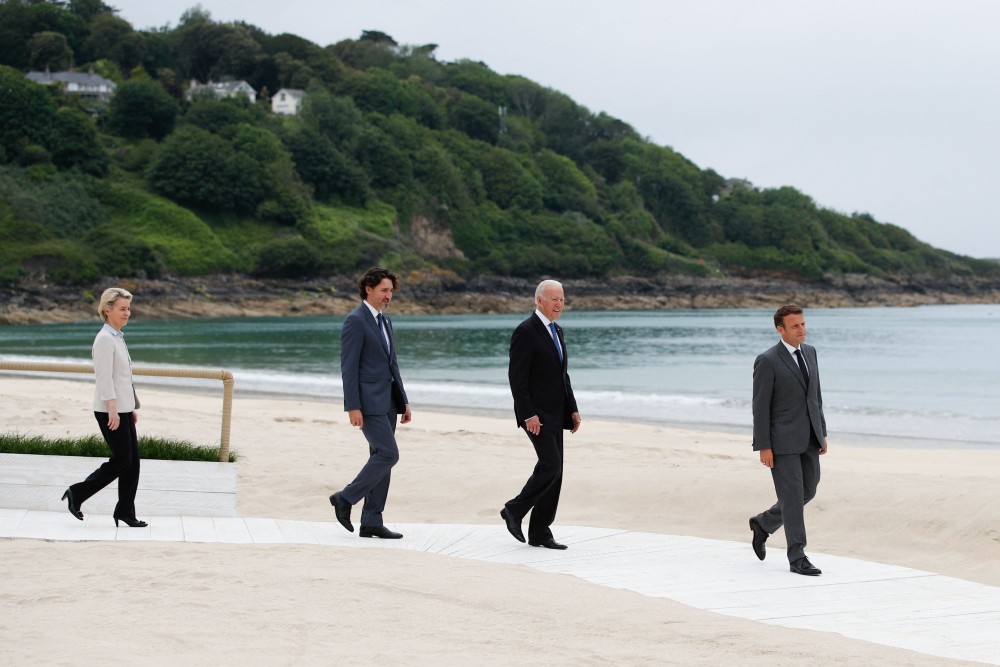 •It’s not easy to make sense of how the United States and Europe are responding to Russia’s aggression.

By Stephen M. Walt and the Robert and Renée Belfer

With some notable exceptions, opinion and commentary in the West have solidified around a black-and-white view of the situation in Ukraine. The near-total consensus is it’s all Russian President Vladimir Putin’s fault; Russia’s stated grievances have no legitimate basis whatsoever; and the only conceivable Western response is to refuse to make any concessions, stand up to Moscow, send more U.S. troops to Europe (though not to Ukraine itself), and proceed with tough economic sanctions if Russia invades.

In some ways, I wish I could subscribe to this view because it would allow me to stop thinking about this complicated set of issues and join the chorus. But I can’t do that because key aspects of the crisis strike me as puzzling, and I keep hearing echoes of the same beliefs, tropes, and engrained orthodoxies that have led U.S. leaders astray in the past. These reflexive responses are making a bad situation worse and are likely to do further damage to Ukraine and to broader U.S. interests.

For starters, I’m puzzled by the gap between the level of resolve conveyed by the United States and NATO and the diplomatic position the alliance has taken. U.S. President Joe Biden has made it clear that the United States is not going to send U.S. troops to fight for Ukraine, and no important European countries are proposing to do so themselves. If anything, the United States has sent the opposite message by withdrawing U.S. military personnel and relocating its diplomats. Apart from a few hotheads, nobody in the U.S. foreign-policy establishment wants to fight a real war for Ukraine, a tacit acknowledgement that this is not, in fact, a truly vital interest.

By contrast, Russia has made it clear it is willing to use force to achieve its core objective, which is to keep Ukraine from joining NATO—not just now but at any point in the foreseeable future. It demonstrated that willingness back in 2014, and Biden thinks they’re about to fight a war of choice now. As with 2014, current movement of Russian troops into the Donbass region is illegal, immoral, and indefensible from the West’s perspective, but it has happened, nevertheless. Even if Russia decides not to mount a broader invasion, the crisis has done considerable economic damage to Ukraine already.

Here’s what puzzles me. Not only is there a significant imbalance in resolve—i.e., what Russia sees as a vital interest (and thus worth fighting for) is less than vital for the West (and thus not worth fighting for)—there is also an imbalance in directly relevant military capabilities. The United States and NATO may be far stronger than Russia overall, but Ukraine is right next door to Russia and therefore vulnerable to its air and ground forces.

Yet despite this yawning gap in both capabilities and resolve, the U.S. negotiating position (and thus NATO’s position as a whole) hasn’t budged at all on the central issue dividing the two sides. That issue is Ukraine’s future geopolitical alignment. Unless I’ve missed something, NATO is still insisting that Ukraine has the right to join the alliance whenever it meets the membership criteria. Even though no one expects Ukraine to join anytime soon—a point the West keeps reiterating to Moscow in the hope of allaying its concerns—it hasn’t been willing to budge on this abstract principle. That’s all it is, by the way: “Open door” is a policy position NATO adopted some years back, not a law of the universe.

As I’ve argued previously, NATO’s reluctance to rescind its 2008 declaration that Ukraine and Georgia would eventually join the alliance is partly due to the understandable desire not to make concessions to Moscow at gunpoint. But I do not understand how Western leaders think they can resolve this crisis without giving Russia some of what it wants on this core issue. There’s little reason to think Putin will be satisfied with minor concessions on missile defense radars or other weapons deployments. When your opponent has local military superiority and cares more about the outcome than you do, resolving a dispute typically requires some adjustments on your part. This isn’t a question of right or wrong; it’s a question of leverage.

The widespread inability to empathize with the Russian perspective on this crisis is puzzling too. As international affairs researcher Matthew Waldman noted in 2014, “strategic empathy” isn’t about agreeing with an adversary’s position. It is about understanding it so you can fashion an appropriate response. Whatever your views on NATO enlargement might be, there is overwhelming evidence that Russian leaders were alarmed by it from the start and expressed their concerns repeatedly. Moscow grew increasingly opposed as its power recovered and as NATO crept ever eastward. Given the United States’ own tendency to indulge in worst-case analysis and view minor security problems in distant lands as if they were existential dangers (not to mention its willingness to use force to try to solve such problems), you’d think the U.S. foreign-policy community would be acutely aware of great powers’ tendency to exaggerate threats and be highly sensitive about their immediate vicinity’s security environment. Try to point this out, however, and you’re likely to be denounced as a naive apologist for Putin.

I’m less puzzled—but still disturbed—by the ease with which the Blob has fallen back on all the familiar tropes in the foreign-policy establishment’s playbook of greatest hits. Read the Washington Post, the Atlantic, the Atlantic Council’s website, and yes, even Foreign Policy, in recent weeks and you’ll get a steady diet of hawkish posturing, with only occasional dissenting views on offer. Putin alone is said to be the source of the problem, neatly demonized along with dictators Adolf Hitler, Joseph Stalin, Saddam Hussein, Fidel Castro, Bashar al-Assad, every member of Iran’s political elite, Xi Jinping, and anyone else we’ve ever been seriously at odds with. Although Washington has been on good terms with any number of bellicose but mostly pro-American despots, the West insists on viewing this crisis not as a complicated clash of interests between nuclear-armed states but as a morality play between good and evil. As usual, society is told that what is at stake is not Ukraine’s geopolitical alignment but the entire direction of human history. And right on cue: Here comes the well-worn Munich analogy, as if Putin was a genocidal maniac whose real aim was to conquer all of Europe the same way Hitler tried to do. One can despise everything he stands for and much of what he has done—as I do—and still reject from this sort of simplistic alarmism. This tendency is especially dangerous because once a conflict is framed in such stark and moralistic terms, compromise is anathema and the only acceptable outcome is total capitulation by the other side. In this environment, diplomacy becomes little more than a sideshow. The West’s policy responses are equally familiar: the usual statements of resolve, the symbolic dispatch of troops to reassure allies, and the imposition of economic sanctions—but scant consideration of compromises that might defuse the risk of war. Even worse, there’s reason to suspect this tendency is well advanced on the other side too.

Unfortunately, if the U.S. goal is to get Moscow to back down and tacitly or explicitly acknowledge that Ukraine can join NATO someday, then it is likely to be disappointed. There’s an echo of the past here too: The United States’ foreign-policy elite has repeatedly shown an inability to recognize the limits of U.S. power and set realistic objectives. Beginning in the early 1990s, U.S. leaders convinced themselves they could 1) create a global liberal order; 2) entice China into becoming a responsible stakeholder (which would eventually embrace Western political values); 3) speedily transform Iraq, Afghanistan, and a few other unlikely states into stable liberal democracies; 4) rid the world of evil; 5) compel North Korea and Iran to abandon their nuclear programs; and 6) expand NATO as far as the West wanted without facing a hostile backlash from Russia or driving Moscow and Beijing closer together. Trillions of dollars have been spent pursuing these (and other) objectives, with little to show for it.

Yet despite these humbling failures, the present crisis reveals there is still a reflexive tendency to assume the United States has the right, responsibility, and (most important of all) capacity to dictate political arrangements all over the world, even in regions that are more important to others than they are to the West. The United States didn’t have that capacity at the height of the unipolar era, and it certainly doesn’t have that capacity today. Which is not to say that the United States is a pitiful, helpless giant or it cannot pursue policies that will make it more secure and prosperous over the longer term. The United States is still the world’s mightiest country—despite repeated self-inflicted wounds and stubborn divisions at home—but there are limits to what it can accomplish, and success still requires setting clear priorities and pursuing achievable goals.

There’s a final feature of this crisis that worries me. Because the United States’ NATO allies were not ready to handle this crisis themselves, the United States has once again assumed the role of first responder to a crisis in Europe. There’s also a vast amount of bureaucratic muscle memory at work here: Reinforcing and reassuring Europe when threats arise from the East is a fabric Washington knows how to weave. If the United States and NATO do manage to get through this crisis without a war, it will reinforce the idea that Europe cannot handle its own security problems and doesn’t need to try because Uncle Sam will still rush to protect it when necessary. Efforts to strengthen European defense capabilities will lose steam, U.S. allies will eventually turn the gas taps from Russia back on, Ukraine and Georgia will keep knocking on NATO’s door, and the United States will continue to be committed to defend a set of wealthy democracies that have let their own military capabilities atrophy for decades.

Who will benefit most from this outcome? Do I really have to spell it out?

Stephen M. Walt is a columnist at Foreign Policy and the Robert and Renée Belfer professor of international relations at Harvard University.