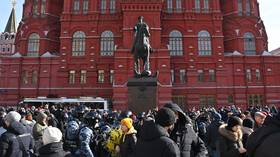 •The largest demonstrations were held in Moscow and St. Petersburg, as thousands of arrests were made across the country

Thousands of protesters took to the streets of Russian cities on Sunday to demonstrate against Moscow’s ongoing military offensive in Ukraine. The fact that the protests were unauthorized resulted in thousands of arrests, the Interior Ministry said.

Roughly half of those taking part in Sunday’s actions hit the streets in Moscow, with crowds gathering at the Manezhnaya Square, just outside the Kremlin walls. Others gathered not far away near the iconic Bolshoi Theater. A large group also marched through Tverskaya street in the city center. Some 2,500 protested in Moscow, according to police.

The protesters were hardly carrying any placards or banners, instead chanting “No to war!” and “Ukraine is not our enemy!” The protests followed some calls posted on the internet, including by the associates of the jailed opposition figure Alexey Navalny. None of the protests had been agreed with the city authorities, as required by Russian law.

Police deployed heavy forces to Moscow city center, with officers demanding crowds disperse before detaining demonstrators. In some cases, the situation spiraled into brief but intense scuffles between law enforcement and the protesters on the sidelines of rallies.

Moscow also saw a crash involving a police van full of detained protesters which collided with another vehicle at a crossroads before crashing into a lamp post and overturning.

Nine people out of 29 inside the van, including both detainees and police officers, sustained light injuries, according TASS. At least three people were hospitalized following the incident.

Some 750 arrests were also made in St. Petersburg where about 1,500 people rallied and chanted anti-war slogans, police said.

Elsewhere in Russia, about 1,200 people participated in Sunday’s protests. More than 1,000 of those were detained. The demonstrations came as Russia’s military continued its offensive in Ukraine, launched by President Vladimir Putin on February 24.

Moscow began what it termed a “special military operation” to protect the people of the two Donbass republics and “denazify” Ukraine on February 24. The military attack sparked a wave of condemnation in the West and has seen Russia slapped with unprecedented sanctions.

Moscow and St. Petersburg have seen small-scale anti-war rallies spring up since the beginning of the offensive, often resulting in arrests.

On March 4, Russian lawmakers passed legislation criminalizing the “defamation” of the Russian army and the spreading of “fake” information about Russian troops or calling for anti-Russian sanctions.

Moscow justified the law by accusing the US and its allies of waging an “information war” against Russia over the conflict in Ukraine.