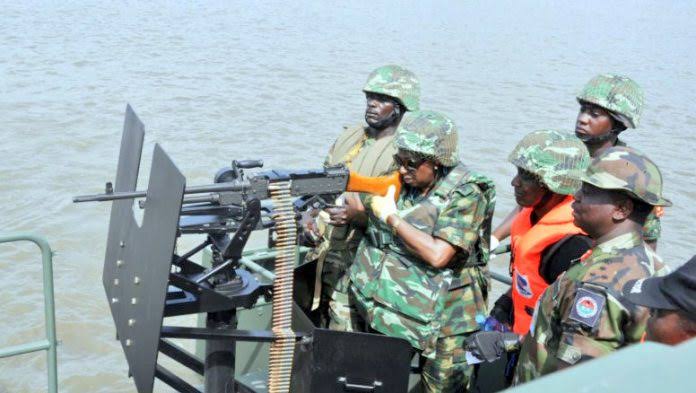 The Nigerian Military on Thursday said troops on anti-bunkering operations in the Niger Delta region have discovered and destroyed 109 illegal refining sites and arrested 24 oil thieves within two weeks.

Major General Benard Onyeuko, director, Defence Media Operations, who made this known in Abuja,  disclosed that the troops of Operation Delta Safe  recovered over four million litres of crude oil, two million litres of Automotive Gas Oil (AGO) and thirty thousand litres of Dual Purpose Kerosene(DPK) worth over N2.7billion within the period from 30th June to 14th July 2022.

The director said all recovered items and apprehended oil thieves were handed over to the appropriate authorities for further action.

“It is pertinent to note that since the surrendering of terrorists to own troops the high calibre of Commanders surrendered at this time is unprecedented among them a Wali (Governor) and Kaid (a 3 star Commander),” Onyeuko said.

He informed that several terrorists logistics suppliers/collaborators were arrested with various items at various logistics towns within the theatre including two women.

Onyeuko also said all surrendered Boko Haram/Islamic State of West Africa Province terrorists and their families were profiled and documented while all recovered items and apprehended suspected terrorists were handed over to the appropriate authority for further action.

On the Kuje Prison break, the director said investigations are still ongoing and several arrests has been made which will be made known to the public in due time.  He also dismissed allegations that soldiers guarding the facility were removed prior to the attack.

“I wish to convey the military high command commendations on the efforts of the troops in the various theatres of operation across the Country. Furthermore, the entire populace is hereby appreciated for the support given to the Armed Forces and security agencies in the conduct of their operations while also urging them to continue to provide creditable information on criminals in their locality,” he urged.