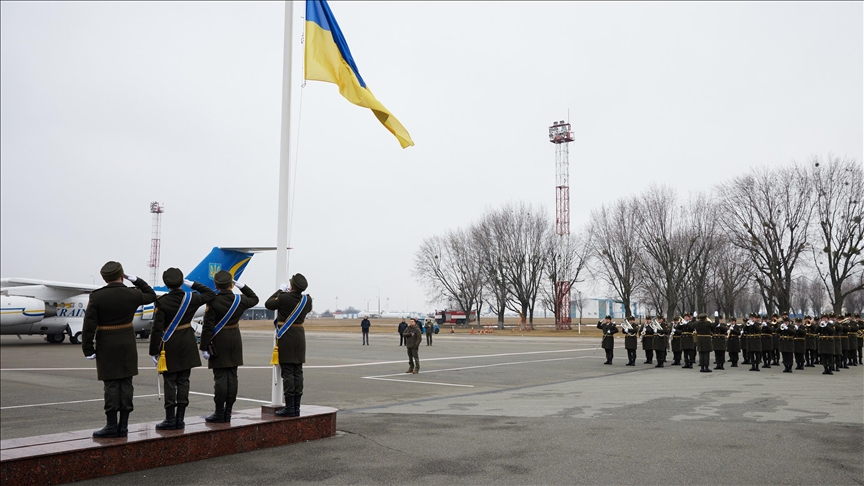 By Talha Yavuz and Gozde Bayar

According to the statement, the strategy aims to ensure that the state intervenes against internal and external threats to improve state security in line with the standards set by the European Union and NATO.

The statement also said that Russia maintained its hybrid war against Ukraine in political, economic and cyber fields. It also mentioned that human rights violations were taking place in “illegally occupied” Crimea as well as regions under the control of pro-Russia separatists in Donbas.

Moscow, according to Ukrainian officials, recently amassed more than 100,000 troops near Ukrainian borders, prompting fears that the Kremlin could be planning a military offensive against its neighbor.

Russia has denied that it is preparing to invade and accused Western countries of undermining its security through NATO’s expansion towards its borders.

Russia also issued a list of security demands to the West, including a rollback of troop deployments from some ex-Soviet states and guarantees that some of those states would not join NATO.

In a written response to those demands, Washington said it is committed to upholding NATO’s “open-door policy.”

NATO Secretary-General Jens Stoltenberg said the alliance will not compromise on core principles. He described these principles as the right of each nation to choose its own path and NATO’s ability to protect and defend its allies.

Ukrainians observe ‘Day of Unity’ amid stand-off with Russia

Amid an ongoing stand-off with Russia, Ukrainians on Wednesday observed the Day of Unity throughout the country.

Ukrainian President Volodymyr Zelensky on Monday declared Feb. 16 as the “Day of Unity”.

This came as reports in the US media claimed that President Joe Biden had told the leaders of the Western allies that Russia could attack Ukraine on Feb. 16.

“Today is the day of all of us who live on the right or left of the Dnieper River, in the city or the village,” Zelensky said during a Unity Day event in the capital Kyiv.

In Kramatorsk, an industrial city that fell to pro-Russian separatists in 2014 before the Ukrainian army regained its control, many Ukrainians gathered in Park Yuvileynyy.

Larissa Kostenko, one of the participants, told Anadolu Agency that the event brought the Ukrainians together as a “single fist”, adding that the victory would be theirs.

Natalya, a member of the Ukrainian army, said that today is a symbol of “unity against the enemy” and emphasized that it is very important for the people to show their support for the army.

Tensions between Russia, Ukraine, and the West escalated over the weekend after Western media reports claimed that Moscow could launch an attack on Ukraine on Wednesday.

Moscow recently amassed more than 100,000 troops near Ukraine, prompting fears that the Kremlin could be planning another military offensive against its ex-Soviet neighbor.

Russia has denied it is preparing to invade and accused Western countries of undermining its security through NATO’s expansion towards its borders.

By Alexander Marrow and Aleksandar Vasovic

There is a growing Russian military presence at Ukraine’s borders, Western countries warned on Wednesday, as Estonia said battle groups were moving ahead of a likely attack to occupy “key terrain,” contradicting Moscow’s insistence of a pullback.

Up to 7,000 more troops have moved to the border in recent days, including some arriving on Wednesday, a senior official in U.S. President Joe Biden’s administration said, without providing evidence.

World powers are engaged in one of the deepest crises in East-West relations for decades, jostling over post-Cold War influence and energy supplies as Russia wants to stop Ukraine ever joining the NATO military alliance.

Western nations have suggested arms control and confidence-building steps to defuse the standoff, which has prompted them to urge their citizens to leave Ukraine because an attack could come at any time. Russia denies it has any plans to invade.

“We continue to see critical units moving toward the border, not away from the border.”

Estonian intelligence is aware of around 10 battle groups of troops moving toward the Ukrainian border, where it estimates about 170,000 soldiers are already deployed, said Mikk Marran, director general of the Estonian Foreign Intelligence Service.

The attack would include missile bombardment and the occupation of “key terrain,” he added.

“If Russia is successful in Ukraine, it would encourage it to increase pressure on the Baltics in the coming years,” he said. “The threat of war has become the main policy tool for Putin.”

Russia’s defense ministry said its forces were pulling back after exercises in southern and western military districts near Ukraine, and Moscow’s ambassador to Ireland insisted forces in western Russia would be back to their normal positions within three to four weeks.

It published video that it said showed tanks, infantry fighting vehicles, and self-propelled artillery units leaving the Crimean peninsula, which Moscow seized from Ukraine in 2014.

But NATO military commanders are drawing up plans for new combat units that diplomats said could be deployed in Bulgaria, Romania, Hungary and Slovakia.

Such units – designed to buy time for additional soldiers to reach the front line if needed – already exist in Poland and the Baltic states.

Britain will double the size of its force in Estonia and send tanks and armored fighting vehicles to the small Baltic republic bordering Russia as part of the NATO deployment.