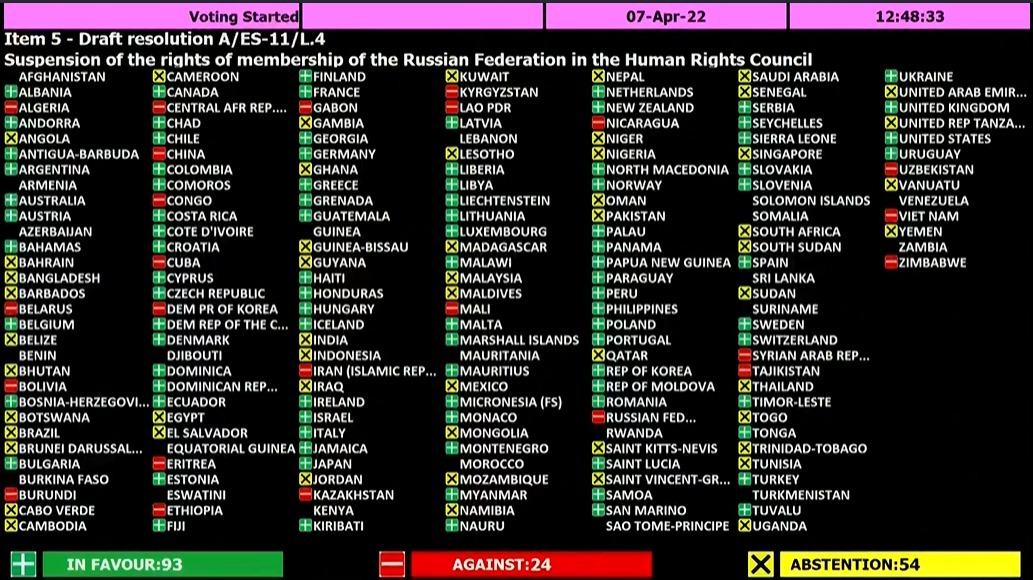 Less than half of the member countries voted in favor of the motion. The session marks the third UN General Assembly vote on Russia’s invasion of Ukraine.

The UN General Assembly voted to suspend Russia from the UN Human Rights Council on Thursday, the latest in a series of resolutions denouncing the Ukraine invasion.

The move comes after Ukraine and its partners accused Russia of committing war crimes in Ukraine.

“We need to take action today to save the council from sinking,” Ukraine’s UN Ambassador Sergiy Kyslytsya said before the vote.

Of the 193 members in the assembly, 93 voted in favor and 24 voted against. Some 58 members abstained, giving the vote the two-thirds majority needed to pass.

In comparison to previous votes condemning Russia’s invasion, a greater number of Russia-friendly countries such as China voted against the proposal rather than simply abstaining.

Ukrainian Foreign Minister Dmytro Kuleba thanked the members who voted in favor of removing Russia from the council in a message on Twitter. “War criminals have no place in UN bodies aimed at protecting human rights,” he wrote.

Russia had been serving a three-year term on the 47-member council — the body charged with protecting human rights.

Video and photographic material from Bucha, as well as other previously occupied towns near the capital Kyiv, show scores of dead civilians. Ukrainian authorities have said they found more than 300 bodies, of which 50 appeared to have been executed.

Russia has denied the accusations and said that the images were staged. Most Western countries have rejected this claim.

Ukraine had previously accused Russia of targeting civilians and residential buildings with its shelling and airstrikes. A strike that hit a children’s hospital and maternity ward drew international condemnation.

Russia is only the second country to have its membership in the Human Rights Council revoked, following Libya in 2011. At the time, longtime leader Moammar Gadhafi was facing off against popular upheavals.

Russia issued a warning on Wednesday ahead of the session, saying that countries that vote in line with the US would face consequences.

A letter seen by Reuters also threatened countries that abstained or refused to participate in the vote, saying that this would serve Washington’s aims.

The campaign to suspend Russia was launched by US Ambassador to the UN Linda Thomas-Greenfield.

The previous votes by the UN General Assembly saw many countries abstain. These included usually friendly countries such as China and India who have refused to criticize the invasion.

This led to two overwhelming votes to condemn Russia’s actions in Ukraine.

Transcorp gives back to Abuja communities