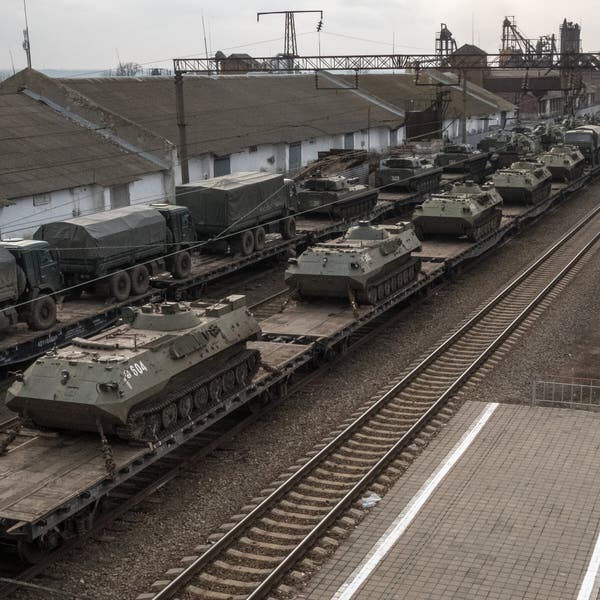 By Pavel Polityuk and Polina Nikolskaya

Ukraine declared a state of emergency on Wednesday and told its citizens in Russia to immediately come home, while Moscow began evacuating its Kyiv embassy, in the latest ominous signs for Ukrainians who fear an all-out Russian military onslaught.

Shelling intensified at the line of contact in eastern Ukraine, where Russian President Vladimir Putin recognised the independence of two Moscow-backed rebel regions this week and has ordered the deployment of Russian forces as “peacekeepers”.

Convoys of military equipment including nine tanks moved towards eastern Ukraine’s Donetsk from the direction of the Russian border, a Reuters witness reported.

But there was still no clear indication of whether Putin will launch a massed assault on Ukraine with the tens of thousands of troops he has gathered near the border. A U.S. defence official said the Russian forces were “as ready as they can be” for an attack.

“Predicting what might be the next step of Russia, the separatists or the personal decisions of the Russian president – I cannot say,” Ukraine’s President Volodymyr Zelenskiy said.

That uncertainty and growing volley of sanctions on Russian interests by Washington and its allies have jolted financial markets, from oil and shares to wheat.

The rouble plunged around 3% as the European Union blacklisted Russian lawmakers, freezing their assets and banning travel.

“Today, I have directed my administration to impose sanctions on Nord Stream 2 AG and its corporate officers,” U.S. President Joe Biden said, referring to the company building the pipeline.

The White House said the sanctions do not affect former German chancellor Gerhard Schroeder, who has headed the shareholders committee of Nord Stream since 2005.

Oil prices reversed their early losses on the day, while Wall Street slipped on news of Ukraine’s emergency measures.

The 30-day state of emergency was approved by parliament. It restricts the freedom of movement of conscripted reservists, curbs the media and imposes personal document checks, according to a draft text. The restrictions come into force from Thursday.

Kyiv has also announced compulsory military service for all men of fighting age.

Ukrainian government and state websites, which have experienced outages in recent weeks blamed by Kyiv on cyber attacks, were again offline on Wednesday. Its parliament, cabinet and foreign ministry websites were affected.

Moscow denies planning an invasion and has described warnings as anti-Russian hysteria. But it has taken no steps to withdraw the troops deployed along Ukraine’s frontiers.

On Wednesday, it took down flags from its embassy in Kyiv, having ordered its diplomats to evacuate for safety reasons.

Western countries have been warning for weeks about the possibility of the bloodiest war in Europe for decades. That has not materialised yet but the threat remains, leaving policymakers to struggle with calibrating their response.

Western leaders say tougher sanctions than so far unleashed are in reserve in case of a full-scale invasion, for example if Russia helps separatists seize parts of eastern Ukraine they claim but do not currently control.

The separatist leader of one breakaway region said on Wednesday that Ukrainian government forces should withdraw from such territory and take their weapons with them.

None of the sanctions so far directly targets Putin himself, or are expected to have serious consequences for Moscow, which is sitting on more than $630 billion in international reserves.

Washington’s move to impose sanctions on 2 AG, a Swiss firm that built the Nord Stream 2 gas pipeline to Germany and whose parent is Russian state-owned gas giant Gazprom, follows Germany on Tuesday freezing approvals for the pipeline, which is built but not yet operating.

EU leaders will hold an emergency summit on Thursday to discuss next steps. A second EU sanction package would include export controls.

Ukraine’s military said one soldier had been killed and six wounded in increased shelling by pro-Russian separatists using heavy artillery, mortar bombs and Grad rocket systems in the two breakaway areas in the last 24 hours.

New satellite imagery showed several fresh troop and equipment deployments in western Russia and more than 100 vehicles at a small airfield in southern Belarus, which borders Ukraine, according to U.S. firm Maxar.

For months, Russia has presented the crisis mainly as a dispute with the West, demanding security guarantees, including a promise never to allow Ukraine to join NATO.

But the recognition of the separatist regions was accompanied by much stronger language against Ukraine.

In a TV address on Monday, Putin characterised the Ukrainian state as an artificial construct wrongly carved out of Russia by its enemies.

Some who saw the speech said they now feel menaced by a leader making decisions which no longer appeared rational.

“In the case of Putin, this is not a struggle for money or power: It’s about pride. Which means the mind is switched off. He can’t stop, and he can’t be stopped,” said Lilia, 72, a pensioner in a Kyiv suburb.

German Foreign Minister Annalena Baerbock said Russia could become a global pariah and urged it not to “completely isolate yourself worldwide.”

Putin said he was always open to finding diplomatic solutions but that “the interests of Russia and the security of our citizens are unconditional for us.”

A Russian attack could be imminent, the Pentagon said, as Moscow said separatists have requested its help

In its most dire assessment yet, the Pentagon said on Wednesday that 80 percent of the 190,000 Russian troops and separatist forces in or near Ukraine are now in combat-ready positions, and that a full-scale military assault is most likely imminent.

“They could attack at any time,” he added, “with a significant military force.”

Late Wednesday night, the Kremlin said that separatist leaders in eastern Ukraine had requested Russian President Vladimir V. Putin’s “help in repelling the aggression of the armed forces and formations of Ukraine,” though Ukrainian officials say there has been no such aggression, and none is planned. The Kremlin did not immediately say how Mr. Putin would respond.

The Russian government and state-controlled media have repeatedly claimed, without evidence, that Ukraine is carrying out a “genocide” against Russian speakers and poses a threat to the region controlled by Russia-backed separatists.

American and European security officials have warned repeatedly that Putin’s government in Moscow is planning a “false flag” operation, an invented attack by Ukraine to justify a Russian offensive.

A Pentagon official, speaking on the condition of anonymity to describe Russian military operations in broad terms, said that all the forces the United States expected Moscow to assemble in the Ukraine crisis are now in place, positioned 3 to 30 miles from the Ukrainian border, if not already in the country’s contested east.

The official said it is still up to Mr. Putin to give the final order to launch an attack.

U.S., NATO and European Union officials said on Tuesday that Russian forces had started rolling into the regions of eastern Ukraine controlled by Kremlin-backed separatists, which Mr. Putin said he was recognizing as the independent republics of Donetsk and Luhansk. President Biden called the move the “beginning of a Russian invasion of Ukraine.”

Among the military options available to Mr. Putin are an offensive into areas still under Ukrainian control that are claimed by the separatists, or a much broader, nationwide attack on Ukraine, which would trigger the largest war in Europe since World War II.

Pentagon officials say Russian forces have been preparing for months for such a large-scale assault, and are now in position to carry it out. That attack would probably include missile salvos, airstrikes, special forces operations, an amphibious assault and ground troops, and could begin at any time, the official said.

Russian state media published letters to Mr. Putin from the separatist leaders that cited the “friendship, cooperation and mutual support” treaties that they had signed with him on Monday. Both letters were dated Feb. 22.

“Kyiv is currently continuing to build up its military presence on the contact line while receiving extensive support, including military support, from the United States of America and other western countries,” wrote one of the leaders, Leonid Pasechnik of the Luhansk group. “In defiance of its international obligations, the regime in Kyiv is focused on a military solution to its conflict with the Luhansk People’s Republic.”

A night shift of the Titan chemicals plant in annexed Crimea has been evacuated from the facility, according to Ukraine’s foreign minister, Dmytro Kuleba. He said it was a possible preparation for another staged provocation by Russia, which annexed Crimea in 2014.

“Moscow seems to have no limits in attempts to falsify pretexts for further aggression,” he wrote.

The Kremlin said Putin had received an appeal for “help in repelling the aggression of the armed forces and formations of Ukraine.” Russian media have claimed that Ukraine is about to launch an offensive against the Russia-backed separatist territories in eastern Ukraine — something the government in Kyiv denies having any intention of doing. Western officials fear that Russia could use a claim of Ukrainian aggression as a pretext for an invasion.