Why the war in Ukraine could reshape the European nuclear order 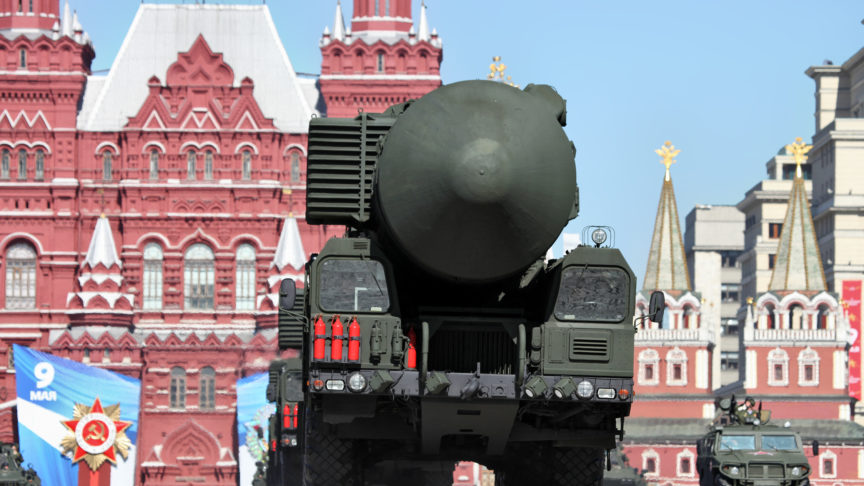 Ukraine finds itself at the centre of a nuclear crisis – again. After leading on nuclear disarmament in the 1990s and standing up to the Kremlin’s nuclear threats in 2014, the country faces an unprecedented Russian troop build-up along its borders. With tensions rising, Ukraine’s fate could change the European nuclear order.

During the cold war, units located across the Ukrainian Soviet Socialist Republic commanded intercontinental ballistic missiles and strategic bombers equipped with around 1,800 nuclear warheads – one-third of the Soviet arsenal. When Ukraine declared its independence from the Soviet Union on 24 August 1991, it ended up with the world’s third-largest stockpile of nuclear weapons.

Ukraine decided to relinquish these weapons – and with good reason. Facing a severe economic crisis and international isolation, the country signed the 1994 Budapest Memorandum to transfer the warheads to Russia, where they would be dismantled, in exchange for security assurances from Washington, London, and Moscow, as well as financial aid and a promise of economic and political integration with the Western-dominated international order.

At times, commentators and Ukrainian politicians have claimed that, if Ukraine kept these weapons, it would be safe from Russian aggression: Moscow would have been deterred by the prospect of nuclear retaliation. With plenty of time and effort, and while risking sanctions and foreign intervention to force denuclearisation, Ukraine might have made use of some of the warheads. But an operational nuclear deterrent would still have remained a long way away. Instead, Ukraine’s decision to disarm contributed to large reductions in nuclear stockpiles in Europe.

Of course, the Budapest Memorandum did not stop Russia from attacking Ukraine in 2014, annexing Crimea, or supporting insurgents in the Ukrainian region of Donbas. At various points in this campaign, Russian media figures and political leaders raised the spectre of nuclear war. During the referendum in Crimea in March 2014, Dmitry Kiselyov – a notoriously provocative presenter on state TV – implored his audience to take Russia seriously as “the only country in the world capable of turning the USA into radioactive dust”. He made the statement against a studio backdrop depicting a mushroom cloud. In a documentary released in 2015, President Vladimir Putin recounted his decision to seize Crimea and revealed that he had considered putting Russia’s nuclear forces on alert: “we were ready to do it … [although] I don’t think this was actually anyone’s wish – to turn it into a world conflict.”

In March and May 2014, Russia’s nuclear forces conducted major exercises involving various nuclear and nuclear-capable weapon systems. Although the exercises had been planned before the invasion of Ukraine, they were accompanied by unusual fanfare, including prominent appearances by Putin. Foreign Minister Sergey Lavrov discussed the finer points of Russian nuclear doctrine, hinting that Russia would use nuclear weapons if Ukraine attempted to retake Crimea.

Even without accidental escalation, a Russian offensive would jeopardise talks between Washington and Moscow on strategic stability and a follow-on agreement to New START.

In response, members of NATO deployed conventional ‘tripwire’ forces to the Baltic states and Poland, while enhancing their readiness and capabilities. Although the alliance has refused to enter a nuclear arms race with Russia, the Kremlin’s actions in Ukraine have frayed the European nuclear order. Various arms control agreements, including the Intermediate-Range Nuclear Forces Treaty and the Open Skies Treaty, have collapsed since 2014 due to growing distrust and treaty violations by Russia.

Yet, until recently, Europeans could almost fool themselves that Russia’s invasion of Ukraine was a serious problem but one that had been contained. Crimea was lost – as the chief of Germany’s navy pointed out, shortly before he was fired for siding with Putin on this and other matters – and the ongoing war in Donbas was a low-intensity conflict that most Europeans need not worry about too much.

If Ukraine comes under attack from the Russian forces that have assembled to the north, east, and south of its borders (including in Belarus and the Black Sea), Europe could be confronted with the biggest war it has seen since 1945. To be sure, in 2014, Russia deployed some conventional ground forces in Donbas after its initial tactics failed. But the current build-up indicates preparations for large and complex combined-arms operations involving land, sea, and air forces, stand-off missile strikes, and cyber-attacks. These operations would likely aim to coerce Ukraine into abandoning its Western aspirations, and the West into giving up on the European security order as enshrined in the Helsinki Final Act and other foundational documents – documents that generations of Soviet and Russian diplomats negotiated and agreed to.

These operations would be accompanied by extensive nuclear signalling to underline Russia’s resolve and deter NATO from intervening – not that NATO states have in any way suggested that they would deploy combat troops to Ukraine. Nevertheless, talk of nuclear war is on the rise again in Russia’s state media – “who says that a nuclear war couldn’t be won?”, as one Russian journalist put it – and Russian officials are fuelling this speculation. Russia’s next annual nuclear exercises will take place in early 2022 – possibly coinciding, once again, with an attack on Ukraine. Belarus may amend its constitution to allow Russian nuclear forces to be stationed on its territory – the Russian military has already deployed nuclear-capable (but not nuclear-armed) Iskander-M missile units to the country for joint exercises.

This would not be a nuclear war, but a war with an undeniable nuclear dimension. Since 2014, Russia and NATO have lost some of the mechanisms they used to avoid serious misunderstandings on nuclear issues. And large military manoeuvres depend on the kind of complex systems that are inherently prone to accidents. Russian forces could inadvertently strike NATO’s surveillance assets in the region, while the sides’ ships could collide in the Black Sea. Even without accidental escalation, a Russian offensive would jeopardise talks between Washington and Moscow on strategic stability and a follow-on agreement to New START – which is the only strategic arms control treaty they still adhere to, and which will expire in 2026. All this would raise serious questions for NATO and the European Union about force postures, conventional defence, and nuclear deterrence.

For the new coalition in Berlin, the controversy around the NATO goal of spending 2 per cent of GDP on defence would pale in comparison to calls from its allies to reinforce the eastern flank with substantial combat forces. Germany is the EU member state most capable of inflicting economic pain on Russia. And, unlike many other European countries, it also has the resources to make meaningful contributions to the balance of military forces in Europe, which is especially important at a time when Washington is increasingly turning its attention towards China.

If Putin abandons his maximalist demands for a wholesale revision of the European security order and settles for a revised arms control agenda, Europe could emerge from the crisis with a more stable and predictable nuclear order. Indeed, in its written responses to Russia’s demands, the United States coordinated with its NATO allies to propose measures designed to reduce the risks and enhance the transparency of military activities and theatre nuclear forces. But, as Russia’s troop build-up appears to enter its final stages, it seems increasingly unlikely that Putin will settle for less.

Rafael Loss is the coordinator for pan-European data projects of the European Council on Foreign Relations’ Re:shape Global Europe project, which seeks to develop new strategies for Europeans to understand and engage with the changing international order. He also works on German and European foreign policy, security and defence, climate policy, transatlantic relations, and nuclear policy and arms control.