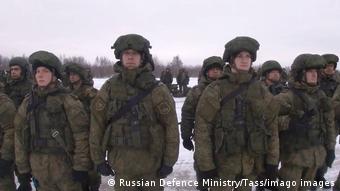 •Since the beginning of the war in Ukraine, dead and wounded Russian soldiers have been arriving in Belarus. Most officials and doctors refuse to talk openly about the specific numbers and details remain sketchy.

Since Russian forces invaded Ukraine on February 24, the Russian Defense Ministry has reported its military losses just once: As of March 2, it said 498 soldiers had been killed and 1,597 had been wounded. Ukrainian officials, on the other hand, have said there are at least 14,200 dead on the Russian side. Probably, neither side is telling the truth.

According to Belarusian media reports and Telegram channels, many wounded Russian soldiers are being brought to Belarusto receive medical care before being transported to Russia. Belarusian leader Alexander Lukashenko confirmed as much saying that after five days of war between 160 and 170 Russian soldiers had received treatment in the cities of Gomel, Mazyr and another Belarusian town.

Four sources told DW that there were Russian soldiers in these southern Belarusian cities. Furthermore, they said a field hospital was set up in Narovlya, not far from the border with Ukraine. One source told DW many wounded soldiers arrived in Mazyr, “without arms, legs, ears and eyes.” They said that some arrived too late and already had gangrene: “If they are brought in time, their limbs can still be rescued.”

The source said some of the wounded had not eaten for five days, arrived disoriented and wanted to call their parents: “These are patients who were born in 2003, from poor regions of Russia. Basically, they are still children.”

Russia and Belarus conducted military maneuvers in Belarus in February

A separate source not directly involved in health care but well informed about the situation said surgery were being performed “non-stop” at a hospital in the region of Gomel, up to 50 per night, including routine operations on civilians. The person said often surgeons had to amputate the limbs of the Russian soldiers.

“The hospital is full,” said the source, asking that the location of the hospital not be made public.

Several people told DW that dead soldiers were also being transported to Belarus. However, nobody could give a precise figure.

The Belarusian Medical Solidarity Foundation confirmed that all hospitals were under strict control.

“There are KGB or FSB employees on the staff. All buildings are under surveillance. Many doctors, who could, in theory, have said something, have been removed from the hospitals and replaced by Russians,” a spokesperson said, adding that many doctors and hospital employees were afraid to talk about what they had seen or done. The spokesperson that since hospitals in Belarus were overwhelmed, “when possible, the wounded are being brought to Russia by train” and confirmed that there were also many dead soldiers.

Belarus not complicit in war

The Belarusian Health Ministry has not addressed the issue of medical care being provided to members of the Russian military. Siarhei Bohdan from the Friedrich Meinecke InstituteofHistoryat Freie Universität Berlin told DW that from the perspective of international humanitarian law, to provide assistance to injured Russian soldiers did not equate to being complicit in the war.

“One has to help all the wounded regardless of which army they belong to,” he said. “In a battle zone as well as in its vicinity.”

However, he explained that there were legal nuances to the argument and because Russia was not officially describing the conflict as a war, the norms of international conventions did not necessairly apply. The Kremlin’s choice to refer to the war as a “special operation” also complicates the status of wounded Russian soldiers in Belarus.

Bohdan said he did not think Belarusian authorities explicitly wanted to conceal that their hospitals provided treatment to Russian soldiers and put their reticence down  to the discipline and bureaucratic culture that had developed in the country.

Lukashenko does not want to get involved

Bohdan said Lukashenko did not want to participate in the invasion of Ukraine and was “doing everything in his power” not to get drawn into it.

“For Belarus, it is important to show that it is not doing anything serious against Ukraine but is forced to cooperate with Russia,” Bohdan said. “The fact that Belarusian hospitals are accepting wounded soldiers is, one could say, a mild form of participation on Russia’s side. But from a humanitarian point of view, it is not participation in the war.”

He added Russia moving its military equipment towards Ukraine via Belarusian territory could also make Minsk complicit, but that a court would need to hear that case for it to hold water.  What was not yet clear is whether the Belarusian government was given the option to decide if it should let the equipment through.

“There are serious doubts here,” said Bohdan, adding that Lukashenko was confronted with the fact that the Russian army, which had come to Belarus for maneuvers, was participating in an attack on Ukraine.

He concluded that this would confirm that though Ukraine and Russia were preparing themselves for war and taking appropriate measures along what they thought would be the front line, Belarus had not. And this was why wounded soldiers were now being treated in civilian hospitals in Belarus.

This article was originally written in Russian