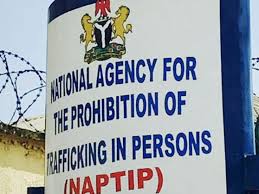 The National Agency for the Prohibition of Trafficking in Persons (NAPTIP) has secured the release of 15 Nigerian girls trafficked to Mali.

They were released from their traffickers with the support of Action Against Trafficking in Persons and Smuggling of Migrants in Nigeria (A-TIPSOM).

Also supportive was the Network Against Child Trafficking, Abuse and Labour (NACTAL).

A-TIPSOM is a project being implemented in Nigeria by the International and Ibero-American Foundation for Administration and Public Policy (FIIAP) and is being sponsored by the European Union (EU).

At the reception of the girls on Sunday at the Nnamdi Azikiwe Airport, Abuja, the NAPTIP Director-General, Dr Fatima Waziri-Azi, stated that the return of the girls was achieved through a collaborative effort.

Represented by Mrs Angela Agbayekhai, Head, Intelligent and International Corporation Unit, NAPTIP, the director-general said the process started through the information the agency got from NACTAL, an NGO working in partnership.

“You will agree with me that it is not just Mali that these children of ours have been, but we are happy today that we have been able to bring back these number of girls.

“It is our hope and plan that we will bring back more of these children because we have so many of them still out there in Mali.

“Today we have 15 of them with a child of three years, a male child. A fact-finding team who went to Mali in 2017 estimated that there are about 20,000 Nigerians still trafficked there.

“These ones brought back today is a drop in the Ocean of the numbers of these Nigerians. This is a good start, NAPTIP D-G will work with the minister’s concern to bring back as many as possible.

“Bringing them back was not difficult, we had on ground an NGO we work with based in Mali, we gathered information, share intelligence and it was easy to put them together,” Waziri-Azi said.

Mr Abdulganiyu Abubakar, the NACTAL President, stated that the whole process was made possible based on the partnership they have with Civil Society Organisations (CSOs) in the 16 West African countries.

He said that NACTAL has implemented different mechanism in the 16 ECOWAS countries for the protection of children.
Abubakar said that there is no country in the region that have a formidable platform in terms of child protection mechanism like Nigeria.

He said that the partnership with ECOWAS countries on child protection mechanisms led to the formation of the West Africa Coalition Against Trafficking in Persons and Smuggling of Migrants (WACTISOM).

“It is this initiative of WACTISOM that led to the identification of these young Nigerian girls; our partners in Mali have written to us about these 15 girls in their custody who are victims of trafficking.

“They have all escaped from their traffickers and want to return back home and we immediately contacted NAPTIP and A-TIPSOM. Mali is a major transit country for trafficking in persons,” he said.

Mrs Ugoh Ogbunide, the Technical Advisor on Partnership, A-TIPSOM, said that all that her organisation have done was to provide support for the return of the girls.