America’s eyes in the skies over Ukraine 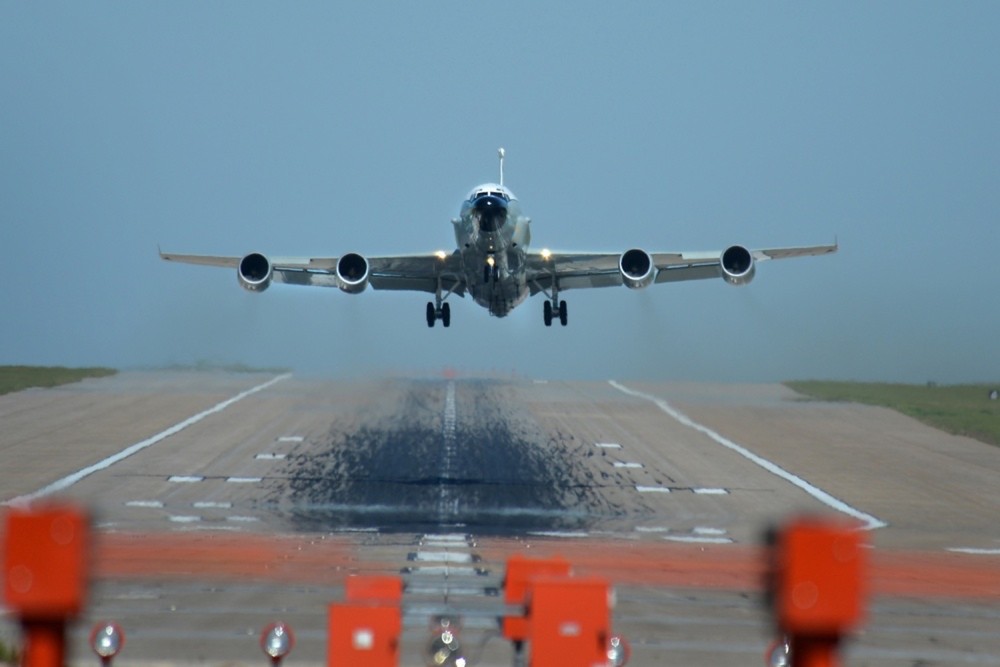 As Russia has amassed well over 100,000 troops near the borders of Ukraine, American spy planes have saturated the skies over the country, vacuuming up intelligence about Moscow’s military movements. Publicly available flight trackers show that the skies over Eastern Europe have been crowded with manned Air Force and Navy reconnaissance planes, unmanned surveillance drones, and even the Air Force’s so-called nuke sniffer, which can detect unusual shifts in levels of radioactive particles in the atmosphere.

The United States has been unusually forward in declassifying and sharing its intelligence assessments about Russia’s troop buildup in an attempt to disrupt Moscow’s plans and rob it of any veneer of plausible deniability about its activities. In a speech on Tuesday, U.S. President Joe Biden said that Moscow now has over 150,000 troops encircling Ukraine. Shortly before Biden spoke, Russian President Vladimir Putin said that Russia would begin a partial pullback of its forces, but on Wednesday Ukrainian President Volodymyr Zelensky and NATO Secretary-General Jens Stoltenberg said they had seen few signs that Russian troops were returning to their bases.

“It remains to be seen whether there is a Russian withdrawal. … What we see is that they have increased the number of troops, and more troops are on the way,” said Stoltenberg, speaking in Brussels as a summit of NATO defense ministers got underway.

Washington’s efforts to expose Russia’s plans have been paired with a large volume of open-source information about the military buildup. For months, social media users in Russia and Belarus have been uploading videos to TikTok and other social media platforms of trainloads of Russian military equipment on the move west, while naval enthusiasts have been tracking Russian ships passing through Turkey’s Bosphorus Strait as they move into the Black Sea. Private satellite imagery companies such as Maxar have routinely released imagery of the proliferation of Russian materiel on Ukraine’s borders.

Publicly accessible flight trackers also provide a window into the West’s efforts to keep tabs on Moscow’s military moves. On Wednesday, the flight-tracking platform FlightRadar24 captured an American RQ-4 Global Hawk surveillance drone circling much of Ukraine’s territory, while an RC-135 Rivet Joint aircraft circled near Crimea. The RC-135 Rivet Joint is manned with intelligence analysts and electronic warfare officers and is equipped with a suite of sensors that can detect and identify signals, according to the Air Force. An Army Beechcraft RC-12 Guardrail, which can collect signals intelligence, took off from and circled over Lithuania, to the north of Belarus.

Each aircraft is equipped with different capabilities and together they can build a more detailed picture of Russia’s actions on the ground. “It takes the full range of capabilities to be able to try and understand, get a picture of what’s actually happening,” said Ben Hodges, former commanding general of the U.S. Army in Europe.

“You’re always looking for an indicator. The Russians are not going to write you a letter and say, ‘Hey, by the way, here’s the plan,’” he said.

Data on the flights gathered by open-source hobbyist Amelia Smith and shared with Foreign Policy shows the number of surveillance flights flown over the region by NATO members and Sweden increased steadily over the past month, peaking at least 22 flights in one day on Feb. 10, the day Russia began joint military exercises with Belarus, before tapering down to just over a dozen flights a day. Due to limited historic tracking data, Foreign Policy was unable to independently verify the data.

A spokesperson for U.S. European Command said: “The U.S. routinely operates aircraft in the Black Sea region in support of various U.S. and coalition intelligence objectives. … We conduct these types of flights with allies and partners routinely, and these missions demonstrate our continued commitment to safety and security in the region.”

There are signs that the Russians are not happy about the uptick in American surveillance flights in Europe. Over the weekend, three U.S. Navy P-8 reconnaissance planes experienced what Pentagon officials described as unsafe and unprofessional intercepts while flying in international airspace over the Mediterranean Sea. While no one was injured, the United States reached out to Russia through diplomatic channels in the wake of the incident.

Some former military officials see the Western intelligence surge as a sign that Russia could be sucking the air out of the room by provoking a costly national security crisis for the West. “This kind of reaction by NATO plays right into [Russia’s] hands because of its tremendous money [and] opportunity costs around the globe,” said Steven Kwast, a retired three-star Air Force general who once served in a top Russia and NATO role on the Joint Staff.

But even as the intelligence surge has brought the conflict into better focus, what the United States and other nations are seeing is still not clear.

Former U.S. intelligence officials told Foreign Policy that interpreting the images captured by the vast aerial armada is more of an art than a science: The Biden administration is trying to read Putin’s intentions by surveying the mosaic of capabilities Moscow has put into the field near the Ukrainian border—over 100 battalion tactical groups, as well as field hospitals, logistics facilities, and other indications of a possible invasion—and measuring that against the Kremlin’s words and diplomatic actions.

This week, Russia has said that tanks from its Western Military District were also going back to its home bases, but officials and experts could not independently confirm the statement. A European diplomat, who spoke on condition of anonymity, said that contrary to Russia’s withdrawal claim, there is no indication that “troops in any serious numbers, or combat enablers, have been withdrawn.” The diplomat said there are no signs that Russia’s alleged invasion plans “are being wound down or even slowed down.”

“We do believe that planning for an invasion continues with the utmost level of seriousness and complexity, and we believe an invasion is likely imminent,” the diplomat said.

What the aerial snapshot does provide, experts said, is the ability to call Russia’s bluff on potential shifts, such as Russia’s recent claims that it is ending military exercises in some places, like Crimea, where experts and officials have worried about an outsized presence of Russian forces.

“It’s one thing for [Russia] to say that they’re going to reposition some troops away from the border as a sign that they’re not going to launch an invasion,” said Mick Mulroy, a former CIA paramilitary operations officer and a deputy assistant secretary of defense during the Trump administration. “But we’ve left the era of trust and verify, and we are in an era of don’t trust unless you can verify. We should use all of our intelligence assets available to do just that.”

If the Russians do choose to move ahead with an invasion, as many U.S. officials fear is still a possibility, the intelligence-gathering mission could become much more challenging, especially if Russia manages to destroy segments of the Ukrainian military or occupy swaths of territory.

In briefings on Capitol Hill on Monday, U.S. National Security Advisor Jake Sullivan told members of the House that the Defense Department was looking at avenues to provide Ukrainian resistance forces—which the Ministry of Defense has been organizing for months now—with more weapons if Russia invades.

And there are already signs that painting that intelligence mosaic could get more difficult. On Wednesday, the New York Times first reported that the CIA station in Kyiv, Ukraine, would move to Lviv, where the U.S. Embassy has relocated to, more than 300 miles to the west and close to the Polish border, potentially complicating the intelligence picture in the east. What’s more, U.S. officials have already warned that the Russian military could use cyberwarfare or electronic warfare attacks to paralyze communications in Ukraine as part of an opening military salvo.

“We’ll find a way to share the intelligence that we have,” Mulroy, the former CIA officer, told Foreign Policy.