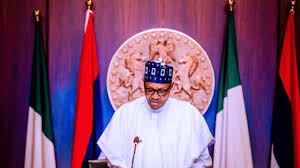 He also urged public-spirited individuals and government agencies working with the State Government, to give the necessary succor to the victims of the fire disaster that destroyed goods in the market.

In a statement on Friday by Femi Adesina, special adviser to the President on Media and Publicity, the President who commiserated with the victims, also urged corporate organizations to assist those whose means of livelihood have been affected by the unfortunate incidents.

The President extended his heartfelt condolences to the victims of the fire incident at the Main Market and Relief Market in Onitsha, Anambra State, respectively, which reportedly destroyed several goods.

The President had earlier on Friday, received citizens of Ogun State at State House Abuja, who had come to show appreciation for the visit paid to their state a fortnight ago.

During the visit to the state, the President had commissioned landmark and legacy projects like roads and housing estates, which he describes as “projects of outstanding quality” during the ‘thank you’ visit.

President Buhari particularly said the new roads would cut travel time considerably, lauding Governor Dapo Abiodun for also working hard on security and other projects that touch the lives of the people.

He recalled that he began his military career in Abeokuta as a Second Lieutenant in the Nigerian Army, “so I will always see Ogun as home.”