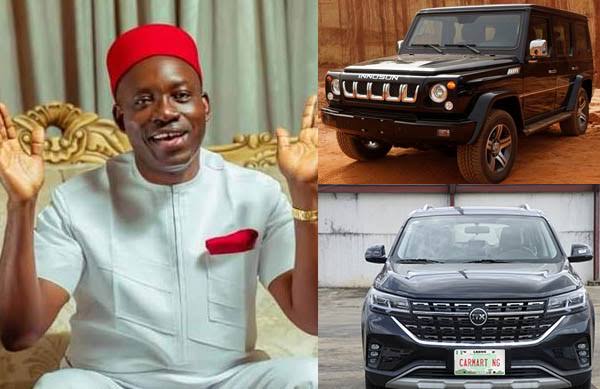 The Ohanaeze Ndigbo Worldwide, Friday, extolled Professor Charles Soludo, governor-elect of Anambra State, for stating that Innoson vehicles would be his official vehicles when he assumes office.

Soludo had this week said he would patronise Innoson vehicles, wear locally produced clothes and that his swearing would be devoid of pomp and celebration.

Ohanaeze, in a release signed by its national publicity secretary, Alex Chiedozie Ogbonnia, said the governor-elect had demonstrated determination towards industrialisation of the state.

According to the pan-Igbo group, “The Innoson Vehicle Manufacturing Co. Ltd (IVM) is a Nigerian automobile manufacturer based in Nnewi, Anambra State, Nigeria.

It however regretted that Innoson motors are not patronised by the Buhari government.

The statement added, “It is therefore morally reprehensible and indeed the worst form of imperialism for Nigerian governments at all levels to prefer and patronize foreign companies as against the locally manufactured goods.

“While other African countries patronize IVM, the Nigerian lawmakers, in 2019, placed an order for Japanese cars valued over N5.5 billion. On the other hand, the aggregate expenditure on foreign cars by all the levels of Nigerian government is over N200 billion per annum.

“Ohanaeze Ndigbo posits on a firm wicket that when the volume of import into a country far exceeds its exports, the balance of trade is distorted and the value of its currency severely threatened.

“The self-induced imperialism and mass poverty by the Nigerian leadership takes various forms: most people in government own buildings in the USA, UK, Germany, France, etc, and their children attend schools in foreign countries; the fuel for cars, gas for bigger machines, including kerosene; health care, etc are sourced from foreign countries.

“Almost everything which can be sourced within is imported without corresponding efforts for meaningful exports. This obnoxious self-inflicted injury has already thrown Nigeria into the poverty capital of the world and fragile states index status; and counting.

“Ohanaeze Ndigbo had in October 2019 urged the Buhari-led federal government and other state governments to patronize locally manufactured goods.

“It is heartwarming that Governor Ifeanyi Ugwuanyi, in one day, procured 100 Innoson Hilux vans for security operatives in Enugu State.

“A visit to Ebonyi State also shows that the traditional rulers of the state use the IVM brand, courtesy of Governor Dave Umahi.

“The Imo State government, led by Senator Hope Uzodimma, is not left out in promoting the IVM, with over 100 vans and several trucks; and more.”

It added that, “Soludo has proved beyond doubt that he is an experienced development economist and a scholar of world renown.”

It recalled that, “Professor Chinua Achebe had long lamented that the problem of Nigeria is leadership. The implication of the Achebe lodestar is that if President Muhammadu Buhari, 36 state governors, National Assembly members, ministers, etc, adopt the Soludo model by patronizing the local goods and services, including medicare, schools, cars, foods, etc, the regrettable tailspin of Nigerian economy, perhaps, may be reversed.”