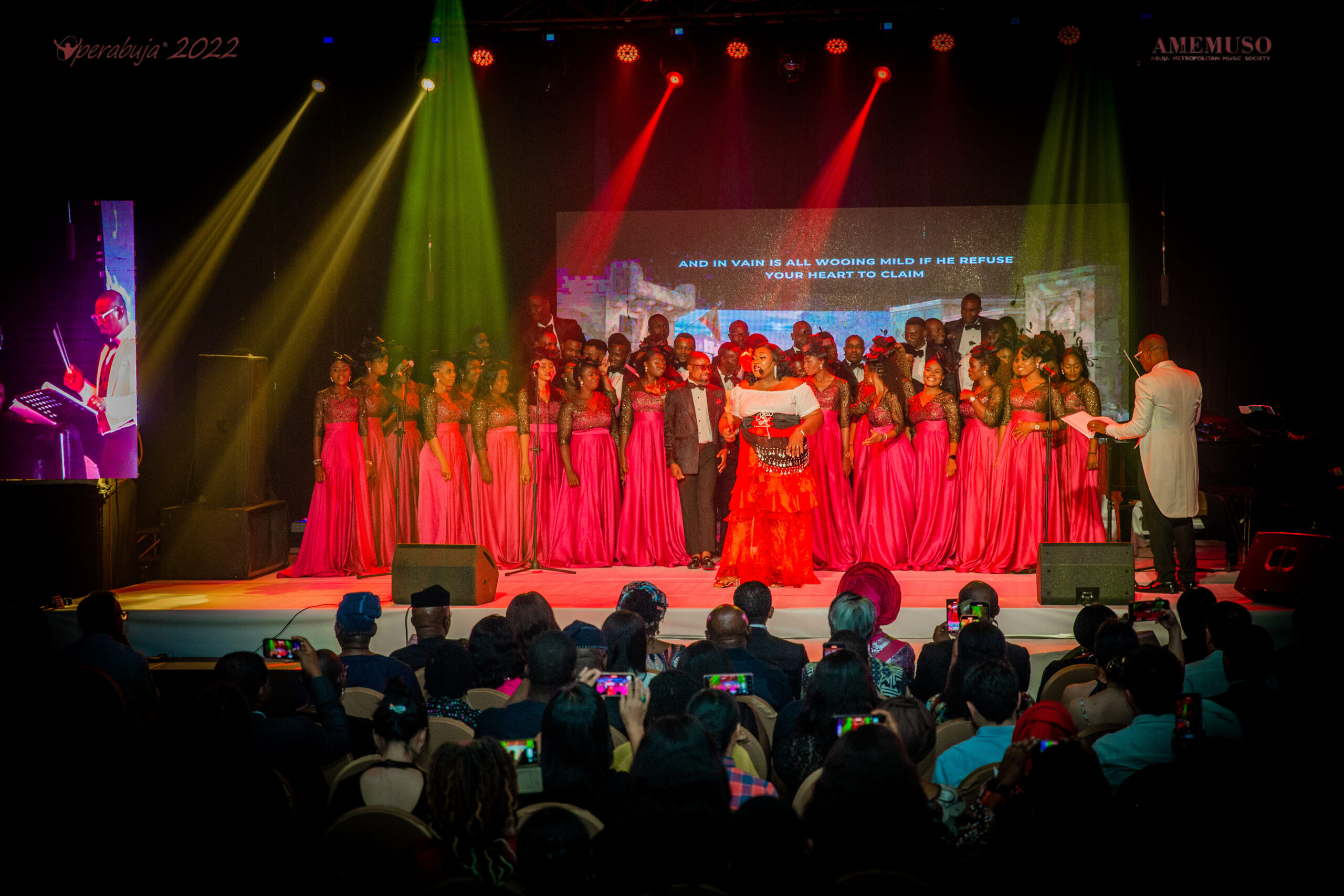 The 2022 Opera Abuja, is a yearly celebration organised by the Abuja Metropolitan Music Society (AMEMUSO) and hosted by the Transcorp Hilton, Abuja.

This year’s event was themed ‘Carmen’, as an expression of love, which could turn tragic if not well managed. It also climaxed in a triumph of the human spirit.

With captivating performances from the AMEMUSO cast of Opera Singers, ‘Carmen tells a story of love and the challenges two persons who are in love may have to overcome.

Expectedly, the performance on that Sunday evening at the Congress Hall of the Transcorp Hilton Hotel, which was a type of classical opera house concert, accompanied by an orchestra or smaller musical ensemble lived up to its glamorous billing as the sonorous voices of the choir of  AMEMUSO’s young and talented Nigerian singers entertained Nigerians and the diplomatic community.

Similarly, the sets and costumes reflected elegant beauty and breathtaking colours that helped to calm some fraying nerves, especially of (the audience) who came to cool off from the stressful events in the country as it heralds the mood for the festive season. The 2022 OperaAbuja, “Carmen” was narrated by veteran actor and producer, Patrick Otoro, and former Minister of Aviation, Osita Chidoka. It was an opera in four acts created by the French composer Georges Bizet but written by Henri Meilhac and Ludovic Halévy, based on the novella of the same title by Prosper Mérimée. It was first performed by the Opéra-Comique in Paris on 3 March 1875, where its breaking of conventions shocked and scandalized its first audiences.

One of the attendees, Paul Stephen, while reviewing this year’s OperaAbuja concert said: “The “Carmen 2022 – George Bizet” was extra-special! At first, I thought it would be boring and I won’t with the opera performances since most operatic shows are done in a foreign language, but everything about the program was perfect, from the choir to the instrumentals, to the sound, the ushers, the lighting, the ambiance, everything was perfect!

“A tremendous ‘thank you to AMEMUSO for putting together and presenting to Abuja such a masterpiece in such a time like this. Everything was precisely delivered to perfection: the floor plan and flow, acoustics, media, stage set up and audience control, and the beautiful acts that made me connect with a time way before my birth. The event was absolutely beyond what I expected. I look forward to attending the next event.”

“For me, being my first time of seeing Opera being performed by Nigerians on Nigeria’s soil, and despite being a French blend of music, drama, and culture show, Opera Abuja 2022 will always remain an unforgettable experience, added another attendee, Dotun Roy

Well acted, narrated, and acted by the AMEMUSO cast, the opera was written in the genre of opéra comique with musical numbers separated by dialogue that was set in southern Spain. It tells the story of the downfall of Don José, played by Paschal Nworgu (Tenor), a naïve soldier who is seduced by the wiles of the fiery gypsy Carmen, acted by Patience Ekwere (Mezzo-Soprano). The tragic trajectory of the story came as José abandoned his childhood sweetheart by deserting his military duties, yet loses Carmen’s love to the glamorous torero Escamillo played by Michael Amadi (Bass-Baritone), after which José kills her in a jealous rage. The depictions of proletarian life, immorality, lawlessness, and the tragic death of the main character on stage, broke new ground in French opera and were highly controversial. Carmen has other characters including Micaela played by Ifunanya Nwangene (Soprano), Zuniga acted by Ndubuisi Dennis (Bass), Morales played by Okoli Chinanu (Baritone), and Mercedes acted by Rita Nnamani (Mezzo-soprano).

Part two of the sonorous night includes the concert soloists such as Michael Amadi, Kathryn Kristov, Michael Esan, Ujunwa Enemo, Claire Onah, and Nancy Acholonu; while the pianists were Bright Baristam Kapalap, Gregory Obi, and Zitu Benafa with Sam Ezugwu as the conductor/director of the show. This part had special appearances and renditions of some of the best songs ever including the “Impossible Dream” from the 1965 music man of la Mancha and composed by Mitch Leigh. Others were “Someone Else’s Story”, from “Chess” by Benny Anderson and Bjorn Ulvaeus; “Go the Distance”, from Hercules, composed by Alan Menken; the “Circle of Life”, a song from the Walt Disney Company of 1994 animated film “The Lion King”, by Elton John with lyrics by Tim Rice; and then “The Lion Sleeps Tonight” (A Whim Away)-a song originally written and recorded by Solomon Linda under the title “Mbube”.

Eventually, the night climaxed with a Nigerian flavor in the thrilling renditions by the AMEMUSO choir of Prof. Laz Ekwueme’s “Ote Nkwu”, and Ayo Oluranti’s “Polongo”. It was indeed a night of cheerful memories of the last generations.