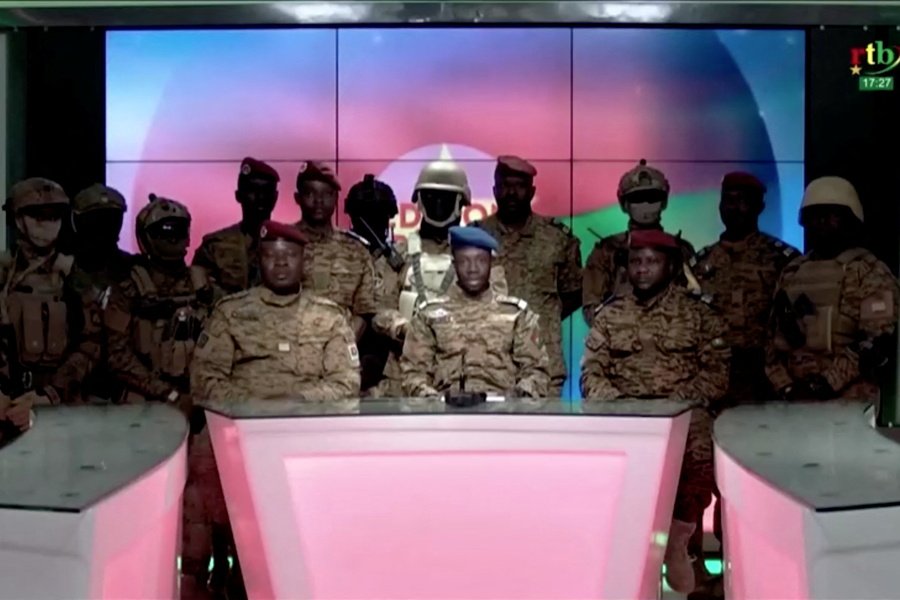 Captain Sidsore Kader Ouedraogo, spokesman for the Patriotic Movement for Safeguarding and Restoration, announces that the army has taken control of the country in Ouagadougou, Burkina Faso on January 24, 2022. (RTB/Reuters TV/CFR)

•Putschists in West Africa should not interpret initial popular support for coups as an indication that citizens no longer desire responsive, accountable governance.

Uncertainty continues to surround the whereabouts of President Roch Kaboré after the Burkinabe leader was deposed in a coup over the weekend. A former prime minister and one-time president of the National Assembly, Kaboré had been in power since 2015, the second civilian to hold the country’s highest office following the collapse of Blaise Compaore’s twenty-seven-year dictatorship and his flight into exile in October 2014. But now, even as the overall situation in the country remains fluid, it seems safe to say that the military is back in the saddle in Burkina Faso. The Patriotic Movement for Safeguard and Restoration (MPSR)-led takeover makes the poor West African country the fourth in the region to fall under the military’s jackboots in less than two years. Mali reopened the floodgates in August 2020 (again in May 2021), with Chad and Guinea following suit in April and September 2021, respectively.

The takeover in Burkina Faso comes days after the authorities had banned anti-government protests called by the civil society group Mouvement Sauvons le Burkina Faso (Save Burkina Faso). Following a familiar playbook, Kaboré had put mobile internet in the cooler for a week after similar unapproved demonstrations in November 2021 had turned violent. The proximate cause of both protests—and the military’s pretext for stepping in—was public anger at government failure to rein in attacks by armed groups linked to al-Qaeda and the self-proclaimed Islamic State (IS). Since 2015, both groups have killed an estimated 2,000 people, with another 1.4 million displaced from their homes.

This is the cauldron that the MPSR has jumped into, promising not only to right the ship of state but also a “return to constitutional order” within “a reasonable time.” If its immediate promise is sketchy, it is because it calculates that it has the support of ordinary Burkinabes, a majority of whom have grown disenchanted with the government’s failure to nullify the Islamist insurgency. Symbolically, a small crowd had gathered at the capital Ouagadougou’s Place de la Nation to express their support for the military.

Both the Economic Community of West African States (ECOWAS) and the African Union (AU) have condemned what they have insisted is an “attempted coup” and reminded the Burkinabe military of its constitutional role of defending and upholding the constitution. While there is little indication that either has the appetite to commit to the use of force to upstage the new junta, the appearance of popular support for the military adds to the complications. For its part, the MPSR will note that both ECOWAS and AU similarly condemned the coups d’état in Mali, Chad, and Guinea, but took no action afterwards.

The swift reaction by ECOWAS and AU seems partly dictated by fear that the takeover contagion might spread to their member states’ respective militaries. For one thing, a good number of them continue to face devastating attacks from Islamist and related extremist groups, including al-Shabab (Somalia and Kenya) and Boko Haram and the Islamic State in West Africa (ISWA), active in Nigeria, Niger, Chad, and Cameroon. For another, they all face growing popular disaffection arising from their failure to extirpate the attacks. In Nigeria, youths fed up with pervasive insecurity in the country’s northern region took to the streets of the capital Abuja in December, protesting government inaction under the banners #NorthisBleeding and #SecureNorth.

Attacks from Islamist insurgencies notwithstanding, many West African countries remain politically weak and susceptible to sporadic lawlessness—incentives for military intervention. In any event, their respective militaries have legitimate corporate grounds for disgruntlement. From time to time, soldiers in various countries have mutinied over unpaid salaries and bonuses. Across board, corruption and lack of investment in equipment and training is a perennial problem. In Nigeria, the military’s failure thus far to dislodge Boko Haram appears to owe more to internal decay than the actual capacity of the insurgents. ECOWAS leaders seem to realize that their own domestic situations make them vulnerable.

Nonetheless, one should not read too much into apparent popular support for the military takeover in Burkina Faso, which, just as in Mali, Chad, and Guinea, is less about support for the military and more about lack of confidence in the political elite. What seems like affection for the soldiers is in fact a desire for stability and good governance. Far from a rejection of democracy, young people and social movements in Burkina Faso want the rule of law, regular elections, political freedoms, safe neighborhoods, and economic prosperity.

The Burkinabe junta ignores this at its own peril.