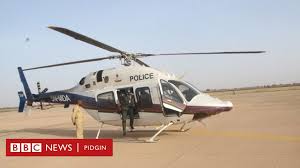 The crashed Bell 429 helicopter owned and operated by Nigeria Police Air Wing which crashed at Sir Abubakar Tafawa Balewa Airport, Bauchi, January 26, 2022 did not have a serviceable radio beacon, preliminary reports released on Tuesday by the Accident Investigation Bureau – Nigeria (AIB-N) has shown.

According to the report, the BCH’ VOR/DME BCEP 115.6 MHZ was unserviceable on the day of the occurrence.

A VOR/DME is a radio beacon that combines a VHF omnidirectional range (VOR) with distance-measuring equipment (DME). The VOR allows the receiver to measure its bearing to or from the beacon, while the DME provides the slant distance between the receiver and the station.

The aircraft with Nationality and Registration marks 5N-MDA had on-board six persons inclusive of three crew members (Pilot, Co-pilot and Engineer), and three passengers with fuel endurance of three hours.

During approach, the helicopter Main Rotor hit the top branches of the tree, while the Tail Rotor impacted a tree of about 5m high and crash landed on heading 359°. The helicopter came to a stop at a distance of 20.60 m from the tree, the report shows.

The crew and passengers disembarked the helicopter without injury.