US, UK  petitioned Over Insecurity in Nigeria 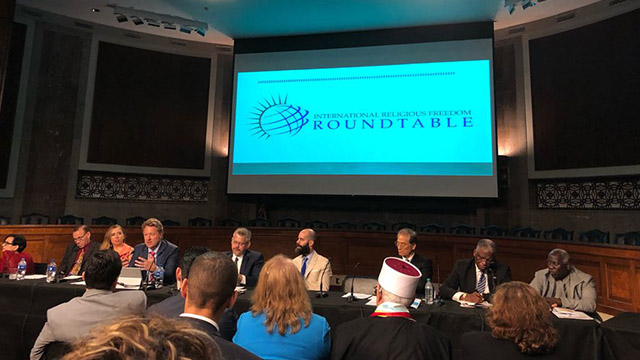 The International Religious Freedom (IRF) Roundtable Nigeria, otherwise known as “Generation NEXT,” have petitioned the United States (US) and United Kingdom (UK) over the persistent violence and killings in the country.
The group also wondered why Nigeria was delisted from Countries with particular concern by the United States regardless of the continued religious killings especially in the northern part of the country.

Representative of the Association, Olasunmbo Ojomu, in the petition addressed to the Mary Beth Leonard and Catriona Laing, US Ambassador and British High Commissioner respectively, requested a town hall meeting to be convened by both governments to discuss the issues of religious freedom, human rights and freedom of expression alleged to be ongoing in the region.

The petition signed by Ishaya Inuwa, Chair IRF Roundtable GenNext and Kyle Abts , Host IRF roudtable said the town hall meeting would provide an opportunity for the affected communities to share their shocking stories to the world, as the insecurity in the North has led to destruction of communities, sources of livelihood and death of thousands of people.

While querying the decision of the US Department of State to delist Nigeria from a Country of Particular Concern (CPC), they demanded its reversal as they insist that the decision encourages the Nigerian government to continue in its dereliction of duties to promote and protect religious freedom, human rights and freedom of expression.

He said: “We were shocked and disappointed when the US government removed Nigeria from the list of Countries of Particular Concern (CPC). The CPC designation had obligated the Nigerian government to be accountable to the global community, but the ongoing violence, kidnappings and deaths in the Middle Belt and Northern Nigeria have been occurring for over 20 years and the global community seems to be silent about it.

“Boko Haram/ISWAP/Ansaru, along with Fulani militants and bandits have being joined by foreign-fighters to unleash terror on the people, devastating lives, farmlands and villages, majority of whom are Christians.

“Leah Sharibu and hundreds of other women, girls and boys are in captivity, while the government is unable or unwilling to do anything. Millions of people are displaced from their homes/communities and are living in IDP camps because of insecurity.

“Over 13 million children, primary to secondary, are afraid or unable to attend schools because of increasing attacks on school facilities. This disruption of education compounds Nigeria’s insecurity woes. Freedom of expression and human rights violations against individuals like Luka Binniyat, Rev Jonah Gangas and Nnamdi Kanu, who are wrongly accused and imprisoned, serve to silence opposition and criticism.

“EndSARS protest crackdown has lacked accountability and remains inconclusive, as Nigerian authorities continue to deny reports and have not ensured that those implicated in the abuses against protesters will ever be held accountable.”