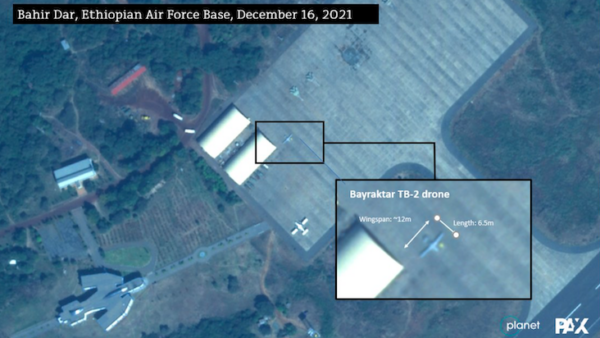 Since August, Ethiopia’s military has assembled a diverse fleet of Iranian, Chinese and Turkish drones. It has proved pivotal to the fortunes of Abiy in the field, routing the TPLF at the battle of Gashena. Now, there are signs that these drones are being targeted at other insurgencies around the country.

On 10th January, during a call with US President Joe Biden, Ethiopia’s prime minister, Abiy Ahmed, discussed the possibility of ceasefire talks in his country’s civil war following the withdrawal of Tigray rebel forces to their northern home region in late December.

The same day people, a drone strike hit a flour mill near the town of Mai Tsebri in western Tigray, killing at least 17 people. Days earlier a separate air attack left 59 civilians dead when it hit a camp for displaced people near Dedebit, another town in Tigray.

The two strikes are part of a broader air campaign against the embattled Tigray region that killed 108 civilians in the first two weeks of 2022, according to an official United Nations tally.

An aid official told The Africa Report that the true figure could be higher since humanitarian teams have been unable to verify reports of casualties in remote locations due to fuel shortages and a communications blackout.

Ethiopia’s government has been tight-lipped on its use of drones in its conflict with the Tigray People’s Liberation Front (TPLF). It has released no official statements confirming their deployment in the bloody 14-month-long war, which has killed thousands and uprooted millions from their homes.

But online sleuths cross-referencing satellite images with social media posts and footage from state-affiliated broadcasters have established that, since August, Ethiopia’s military has assembled a diverse fleet of Iranian, Chinese and Turkish drones.

Western diplomats and Amhara officials said they played a vital role in driving back a push south by the TPLF in November that brought the rebel group within 200km of the capital, Addis Ababa, and sparked international alarm.

“To chase the TPLF away, they were really important,” said Molla Tashagaw, mayor of Gashena, a town in the Amhara regional state. The road into Gashena was dotted with knocked out tanks and vehicles when The Africa Report visited in December, shortly after a four day-long battle had forced the Tigray rebels from the area.

Although it was not possible to verify if these had been hit by drones, Molla said the weapons were decisive in targeting TPLF armour during the fighting. Analysts say the strike capability of armed aerial drones also heaped pressure on the Tigray forces’ over-stretched supply lines, enabling the Ethiopian military to hit the TPLF’s exposed rear positions without risking its own forces.

Although Ethiopia’s use of drones has increased sharply in recent months, their presence loitering above the country’s battlefields is not new. When fighting broke out between the federal government and the TPLF in November 2020, Emirati drones stationed in Eritrea played a key role in knocking out TPLF positions, according to a western official. These Emirati strikes ended in early 2021.

After the TPLF recaptured much of their Tigray region in June and then advanced into the neighbouring states of Afar and Amhara, Ethiopia’s government rushed to assemble its own fleet of drones.

In August, Wim Zwijnenburg, a researcher for Dutch peace organisation PAX, unearthed some of the first evidence of Iranian drones operating out of the airport of Semera, the capital of the Afar region.

Later reports by Reuters broke the news that Turkey was supplying drones to Ethiopia, with Abiy striking a military cooperation pact with Ankara in August. A few weeks after that deal was made, following a trip to the continent, President Recep Tayyip Erdogan said: “Even in Africa, everywhere I go, they want U.A.V.s.” U.A.V.s refers to Unmanned Aerial Vehicles, another term for drones.

Meanwhile, flight trackers have logged dozens of shipments arriving in Ethiopia from the United Arab Emirates, some of which were believed to have transported Chinese-made drones. Others were likely supplied directly by China, said Zwijnenburg.

Zwijnenburg estimates that the Ethiopian government currently has a fleet of 10 Chinese Wing Loong drones, “at least 4” Turkish Bayraktar TB2 drones and 2 other Iranian ones called Mohajer-6. Each model can be armed with air-to-ground missiles or used as surveillance tools to target strikes by fighter jets and artillery.

“It’s quite a diverse set of equipment they’ve managed to acquire over the last few months,” said Zwijnenburg. “We saw the first Iranian drones popping up in August, and later images appeared of the Chinese Wing Loong…if the numbers are true, this is the largest drone fleet in Africa, with Nigeria being second.”

Zwijnenburg believes “it is very likely that the Turkish drones are being operated by Turkish pilots.” The weapons carry a particular pedigree, having been used to devastating effect by Azerbaijan’s military in its victory over Armenia in the 2020 Nagorno-Karabakh conflict. They were also used to hammer the supply lines of General Khalifa Haftar’s Libyan National Army, thwarting his months-long attempt to take Tripoli from the UN-recognised Government of National Accord in 2019-2020.

Stacie Pettyjohn director of the defence programme at the Washington-based Centre for a New American Security, said drones are particularly attractive to countries fighting rebels without air capabilities, such as Ethiopia, since they are much cheaper than conventional military aircraft and easier to operate. They can also linger over battlefields for up to 24 hours without needing to refuel or land to relieve fatigued pilots.

“Their affordability is a huge factor,” said Pettyjohn. “It usually takes thousands of hours and a lot of resources to train pilots to fly manned aircraft, but with drones you can basically build an air force on the cheap. When you’re using them in a limited role to gain intelligence, set potential targets and at times launch strikes, it is much more affordable and much simpler.”

She added: “Ethiopia is using them as you would traditionally use an air force, and since the Tigrayans don’t have an air force or good air defences, they are terribly vulnerable. Ethiopia used them to find Tigrayan forces far back from the frontline and to strike at distance, where Ethiopian forces weren’t vulnerable.”

In late December, following the battle for Gashena and under pressure on other fronts, the TPLF withdrew to Tigray. Explaining the decision in a letter to the UN Secretary General, Antionio Guterres, TPLF leader Debretsion Gebremichael cited the role of “drones provided by foreign powers” in the conflict, although he insisted the decision was strategic, not the product of battlefield setbacks.

Prime Minister Abiy has stated that government forces will not enter Tigray in pursuit of the TPLF. This decision briefly reignited hopes for peace talks, but instead Ethiopia’s government appears to have opted for a strategy of bombarding the rebels their stronghold, resulting in heavy civilian casualties.

For its part, the Ethiopian government has denied targeting civilians, insisting that it only strikes legitimate military targets.

Meanwhile photographs of bomb fragments from Iranian-made missiles have emerged from western Oromia, where the government is fighting an insurgency by the Oromo Liberation Front, a separatist group allied to the TPLF and from the Oromo ethnic group, Ethiopia’s largest.

For now the evidence is limited but it suggests a new willingness by Ethiopia’s government to deploy its foreign-made drones as a tool against insurgencies across the country, not just in its conflict with the TLF.

If that is the case, it raises thorny legal questions that Ethiopia’s government is yet to address, said Zwijnenburg at PAX. “Armed drones have now become an essential equipment for Abiy in the fight against various armed groups in Ethiopia and they’re likely here to stay, since these conflicts are dragging on,” he said.

“Ethiopia has a responsibility to restrict the use of lethal force,” said Zwijnenburg. “The rules are clear: the government has to provide a clear legal position in case there are civilian casualties, so victims can hold the government to account. These weapons offer the ‘holy grail’ of precision, but that is over-hyped. On the ground, we are still seeing so many civilians killed.