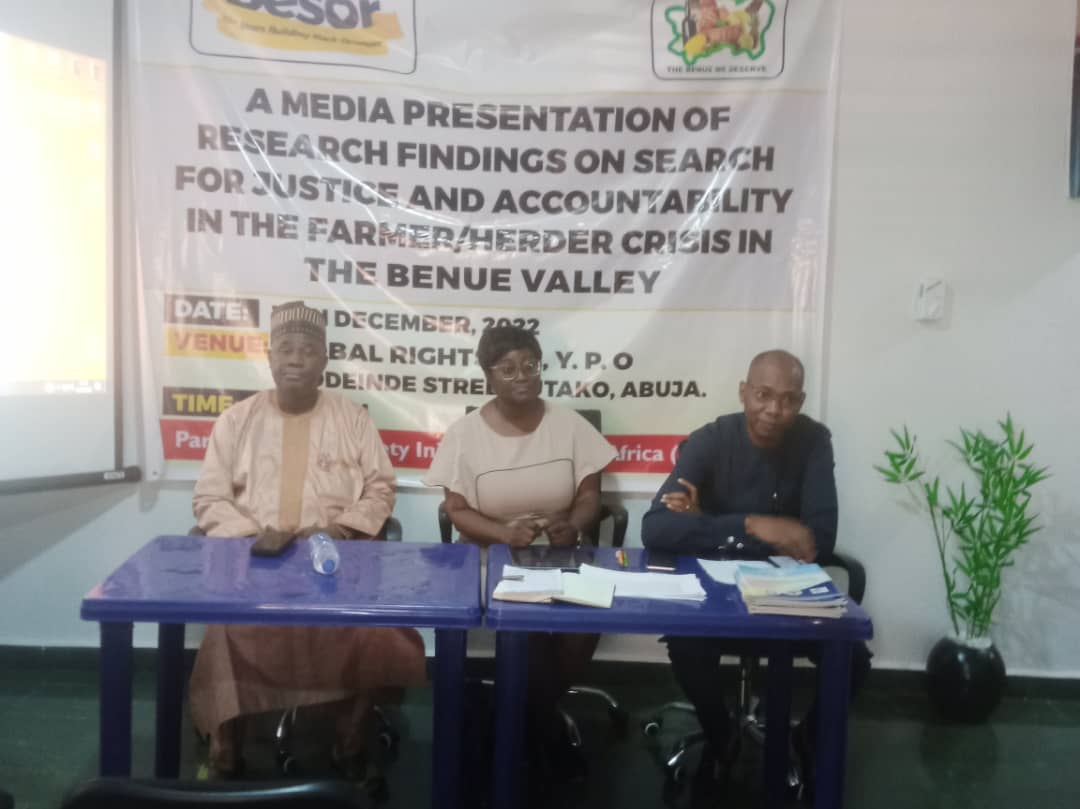 Following the incessant killing of persons in Benue state,residents has charged the Federal Government (FG) to bring to book perpetrators and sponsors of the heinous crime.

The residents expressed concern over the seemingly quiteness to provide adequate security for the communities as well as prosecute those responsible as they are constantly maimed and killed in their own homes.

This was disclosed at a media presentation of research findings on search for justice and accountability in the Farmer/Herder crisis in the Benue valley, carried out by the Sesor Empowerment Foundation with partnership of the Benue we Deserve Foundation (BenDef) in collaboration with Global Rights and funded by Open Society Initiative for West Africa (OSIWA) in Abuja.

Programme Officer Sesor Empowerment Foundation, Ina Inga noted that the affected communities called for concerted efforts by the government to put an end to the endless killings as this have cost them alot.

She noted that, the research which cuts across three states of Benue, Taraba, Plateau has witness a heightened cases of conflict as a result of scarce resources, environmental degradation, amongst others.

Inga said, “the Farmers/Herders crisis is multifaceted. It has gone beyond ethnic, religious problem and limited resources, it has become a tool in the hands of the elites in the society and increased by arm proliferation,inaccurate data and lack of intelligent gathering.

” It is no longer a uniformed pattern as sometimes it is haphazard and it seems like criminal elements has taken advantage of the porous security situations.

Director Vulnerable Group Department, National Human Rights Commission Barr. D.S Bobbo reiterates the multifaceted nature of the crisis adding, “governmnt need to step up responsibility as duty bearer to wholistically solve the entire dimension of conflicts in the middlebelt. From the pure criminality that is happening.

“Most times the herders are not the owners of the cattle they shepherd as it could be owned by, governors, ministers, senators, generals in the military, and that is why we believe that the agencies that are suppose to bring them down are themselves helpless because the owners are big people who call shots, so when apprehended they are let go.

Bobbo call on the government to enforce its powers as, “the primary purpose of government being the source of security for life and property of the citizens which is outlined in the constitution of section 14 should be focused on, especially under in a democratic government as practiced.

Bobbo further stated that, “It should also be a collective effort for communities to assist the government in providing information to build resilience. Have community dialogue for the residents to understand they also have a part to play in the security architecture of their communities.”

On his Part the Programme Manager Global Rights, Edosa Oviawe disclosed that, the crisis has also seen the increase of rape and sexual violence against women, creating a form of vulnerability for women and expose them to further abuse. Adding, Persons With Disabilities were also affected as they are unaware of happenings in their environment thereby putting them in the open for attack.