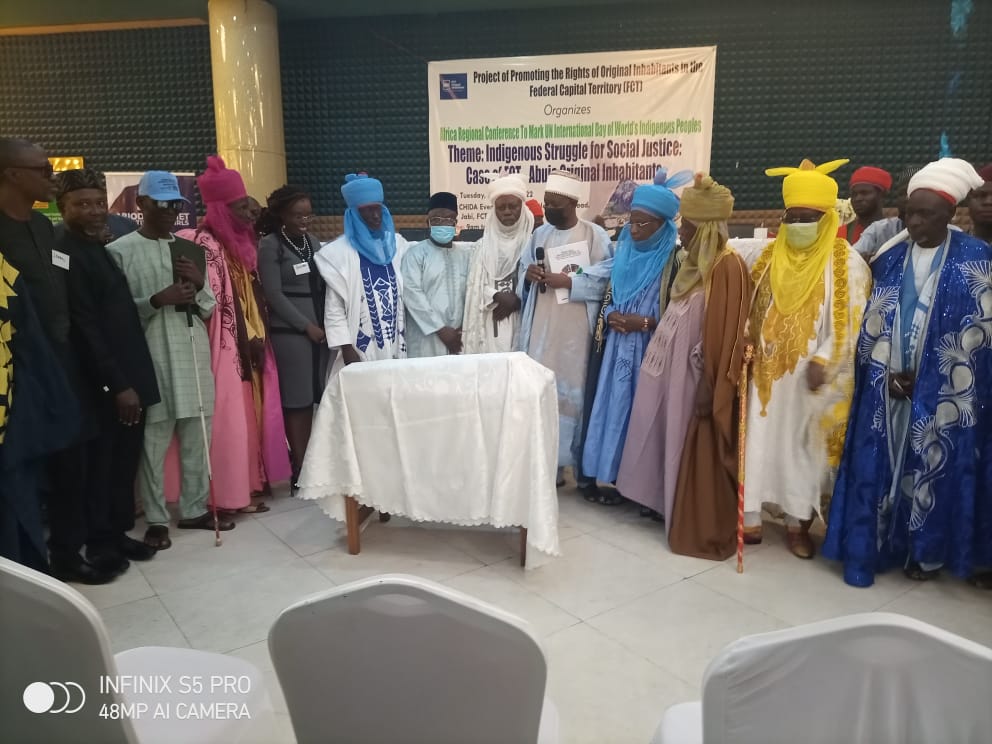 The Original Inhabitants (OIs) of the Federal Capital Territory (FCT) has tasked the Federal Government on inclusion in the political structure of Nigeria, demanding the seat of a governor in the nations capital.

This charge was made on Tuesday at the African Regional  Conference on Indigenous Struggle for Social Justice, organised by   Resource Centre for Human Rights and Civic Education (CHRICED), in  collaboration with  MacArthur Foundation in Abuja.

The regional conference was part of activities to mark this year’s United Nations International day of World Indigenous people.

Speaking, the Etsu of Kwali, Shaban Audu Nizazo III reiterated the need for full participation and representation in the senate and  house of Reps of the OIs, as obtainable in the 36 states.

Nizazo lamented that, the FCT is excluded in the gubernatorial election, noting if this persist without redress, the original inhabitants are therefore not part of the country.

“We thought as a people that we have been marginalized to certain extent, marginalized in the sense that there are certain rights that are due to us, we have not been given.

“Particularly politically, as when others are electing their governors we are not  doing anything, it looks as if we are not fully Nigerian.

“When other Nigerians are electing their governors and the House of Representatives Members, we are doing anything.

“If we continue in this direction. It therefore means that the FCT indigenes are not Nigerians.

“We are making an appeal to whichever authorities that may be that we should be given the opportunity to also elect our governor, no matter what it is called whether the mayor or whatever it is,” he said.

On his part, the Deputy Director MacArthur Foundation, Dayo Olaide stated that, the system have been blind to the rights of the OIs as democracy has not been working for the benefit of all.

Olaide said, “Nigerians need to be able to feel the benefits of democracy for them to be able to say yes, truly democracy is working for us. Unless we begin to make democracy work for Nigeria, I think we are going to keep struggling.

“So today we have an opportunity to draw attention to the plight of its small population, who are for decades have suffered social injustice.

Olaide however demanded citizens to ask questions bothering on budget expenditure, adding, “the federal government alone, budgeted over 100 trillion in the last two years, I think there are legitimate concerns with questions, such as, why do we still have 18 million out of school students, the state of infrastructure, unemployment in the country,  these are important pointers to the challenges facing us in spite of all that we have invested or appropriated over the last 20 years.


“So in terms of what we have invested into the system, and the direct impact on the Nigerian citizens is very, is very slim,” he said.