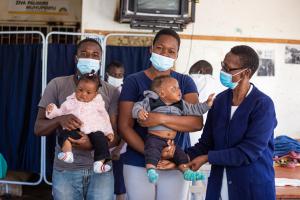 Healthy life expectancy in the African region has increased on average by 10 years per person, a  2022 World Health Organization (WHO) assessment reports has revealed.


The “Tracking Universal Health Coverage in the WHO African Region” report  shows that healthy life expectancy—or the number of years an individual is in a good state of health—increased to 56 years in 2019, compared with 46 in 2000.

According to the report, this rise is greater than in any other region of the world during the same period. It however noted that the rise is still well below the global average of 64, over the same period, as  global healthy life expectancy increased by only five years.

The report also warned that the disruptive impact of the COVID-19 pandemic could threaten gains made in Africa.

The report explains that improvements in the provision of essential health services, gains in reproductive, maternal, newborn and child health, as well as progress in the fight against infectious diseases— particularly the rapid scale-up of HIV, tuberculosis, and malaria control measures from 2005—helped to extend healthy life expectancy.

On average, the WHO noted that essential health service coverage improved to 46 percent n 2019, compared with 24 percent in  2000, explaining that the most significant achievements were in preventing and treating infectious diseases.

Matshidiso Moeti, WHO regional director for Africa said the sharp rise in healthy life expectancy during the past two decades is a testament to the region’s drive for improved health and well-being of the population.

“At its core, it means that more people are living healthier, longer lives, with fewer threats of infectious diseases and with better access to care and disease prevention services. But the progress must not stall. Unless countries enhance measures against the threat of cancer and other noncommunicable diseases, the health gains could be jeopardized,” she stated on Thursday.

The Report, however warned that progress in healthy life expectancy could also be undermined by the impact of the COVID-19 pandemic unless robust catch-up plans are instituted, explaining that on an average, African countries reported greater disruptions across essential services compared with other regions.

The report disclosed that more than 90 percent of the 36 countries responding to a 2021 WHO survey reported one or more disruptions to essential health services, with immunization, neglected tropical diseases and nutrition services suffering higher disruptions.

The WHO said it  is crucial for governments to step up public health financing. It revealed t only Algeria, Botswana, Cabo Verde, Eswatini, Gabon, Seychelles and South Africa fund more than 50 percent of f their national health budgets, while others are fund below resulting in huge funding gaps