How Can the Central African Republic Find Peace? 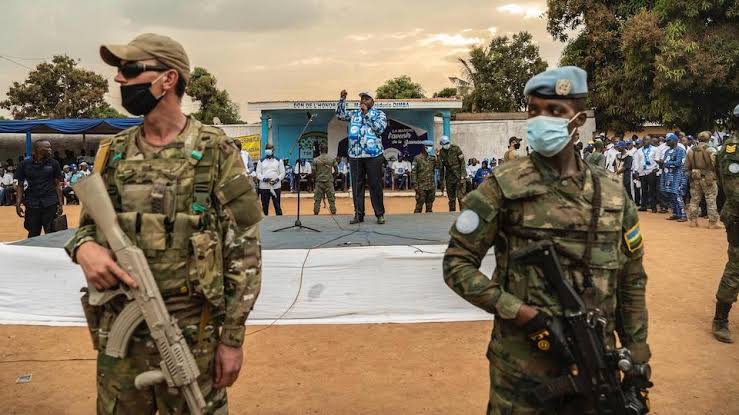 Last week, long-promised peace talks in the Central African Republic ended without progress. Rebel groups were not invited, and opposition parties boycotted the so-called national dialogue for reconciliation, held in the capital of Bangui.

Following his controversial reelection in December 2020—less than a third of the electorate was able to vote because rebel groups controlled large chunks of the country—President Faustin-Archange Touadéra promised to hold talks.

But opposition groups saw the forum as an attempt to placate the international community amid United Nations sanctions. At the dialogue, civil society groups denounced discussions on amending the constitution to allow Touadéra to run for a third term. That proposal was later withdrawn.

However, analysts fear that the possibility of real change is fading as Touadéra’s administration becomes increasingly autocratic, a situation complicated by the deployment of mercenaries from the Russian private security firm Wagner Group and Rwandan troops who helped wrest back key cities from the grip of armed rebels.

From the outset, CAR’s government hoped to defeat the rebels using Wagner mercenaries and without negotiation, said Hans De Marie Heungoup, a senior analyst for Central Africa at the International Crisis Group. Instead of exile, rebels want an agreement allowing them to stay in CAR and not be prosecuted for war crimes, a deal the government views as untenable.

Russian deployment. Britain’s Defence Ministry announced last week that Russia had been forced to withdraw mercenaries from operations in Africa and Syria. Although the situation may change, there is no evidence on the ground, observers told me, that those withdrawals were from CAR.

Nevertheless, rebels seem to think it might help them. “Some [armed groups] currently think that the fight between Russia and Ukraine may distract Russian Wagner forces and allow them to come back in the country or it may push Western countries such as France to support them in order to fight against Wagner,” Heungoup said.

Power struggles. The conflict started in 2013, when the predominantly Muslim Seleka rebels overthrew the brutal regime of François Bozizé, who had seized power in a 2003 coup. Encouraged by Bozizé, mainly Christian anti-balaka militias fought back and started targeting Muslims. A Russia-brokered peace deal with 14 armed groups was signed in 2019, allowing militias into the government and federal army, but violence erupted after Bozizé returned from exile and was barred from running in the 2020 elections.

Touadéra has accused Bozizé of inciting the new cycle of violence under an alliance of rebels, called the Coalition of Patriots for Change, who have stepped up guerrilla tactics even with 15,000 U.N. peacekeepers deployed in the country for nearly a decade—a fact that Touadéra weaponizes. “It’s part of the narrative that the president uses to say, ‘What are those guys doing there? That’s why I brought Russia in, because they are the ones that can fight,’” Heungoup said.

Murky arrangements. Moscow maintains that it sent unarmed military trainers and weapons to CAR in return for mineral concessions, part of a 2017 deal inked with Bangui. U.N. experts say those so-called trainers are 2,000 armed mercenaries from the Wagner Group, whose existence Moscow denies because private military contractors are illegal in Russia. Russian fighters have a similar foothold in Mali, Libya, Mozambique and Sudan.

Offensives have seen gross human rights violations—including extrajudicial killings, rape, looting, and torture—committed on all sides, including by Wagner operatives, U.N. troops, and the federal Central African Armed Forces. The conflict has left thousands of people dead and sent 737,000 fleeing mainly into the neighboring Democratic Republic of the Congo.

Ordinary citizens seemingly welcome Moscow’s intervention, because without Wagner assistance, Bozizé would have seized control. “Touadéra’s administration, although it is corrupt, is an administration which has been democratically elected,” Heungoup said.

Heightened turmoil. More than half of CAR’s state budget comes from the World Bank and European Union, which could suspend support over the use of mercenaries. Residents have pragmatic concerns about rising Russian abuses, weakening governance, and economic development. Put simply, Central Africans want peace.

International reengagement could ease hostilities. This could be through an increase in Rwandan troops, who are also fighting terrorists in Mozambique. As John A. Lechner and Alexandra Lamarche noted in Foreign Policy last year, “half-funded programs, and half-hearted reforms will only result in half-baked solutions that lead to more instability.” Touadéra will therefore need to initiate meaningful engagement among warring parties if CAR is to achieve a long-term solution.